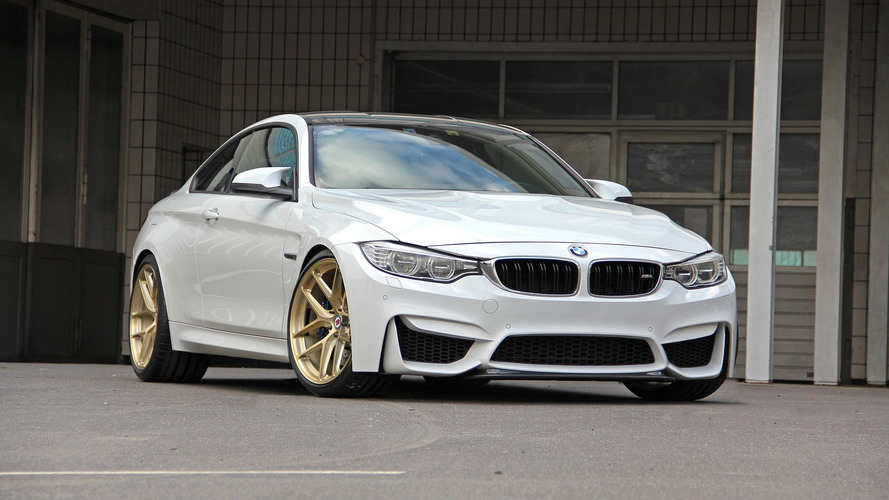 Germany’s Alpha-N Performance’s new CRT kit for the BMW M4 shows that aftermarket upgrades can offer subdued improvements rather than making your vehicle cartoonishly ostentatious. By taking inspiration from the Bavarian automaker’s own M3 CRT sedan, the firm creates a tuned sports coupe that looks like something the factory would offer.

Alpha-N’s M4 CRT features carbon fiber parts for the front splitter and rear spoiler. The piece at the nose is barely noticeable but provides a bit of aggressiveness when viewing the vehicle in profile. The new attachment on the trunk is far more prominent. The part also produces 117 pounds (53 kilograms) of downforce at 124 miles per hour (200 kilometers per hour).

Alpha-N also installs its EVOX Stage 1 engine upgrade. The kit takes output to 520 horsepower (388 kilowatts), which is a healthy upgrade over the stock 425 hp (317 kW).

To show off the kit, the aftermarket firm fits some extra performance goodies on the M4. A fully-adjustable Öhlins Road and Track Coilover suspension hunkers the body down over a set of 20-inch HRE Performance Wheels. Mounting 265/30 Michelin Pilot Super Sport tires in front and 295/30 rubber in the rear should make the coupe stick to the road. Inside, the firm installs a set of Recaro Pole Position seats.

It’s generally the two-door variants of the M3 (and now M4) that get special edition models like the GTS and CS. However, the M3 CRT sedan broke from this convention in 2011. A carbon fiber hood and seats helped cut weight. The titanium exhaust was lighter than the stock unit, too, plus it gave the four-door a better sound. Power came from the GTS’ 4.4-liter V8 with 444 hp (331 kW), and a seven-speed dual-clutch gearbox routed grunt to the rear. Unfortunately, the company built just 67 of these meaner models, which made them a collector’s item from the moment they arrived in showrooms.

Sport Evolution, GT, CSL and GTS. These are a few of the unique suffixes attached to limited edition more focused M3 models over the years, and more recently the M4 successor to the M3 coupe.

While these abbreviations figure prominently in the minds of BMW enthusiasts, there was one special M3 series that received a lot less fanfare at the time, and has thus been almost forgotten.

Based on the E90 M3 sedan, the M3 CRT (Carbon Racing Technology) adopted many of the technical features from the M3 GTS such as its 450 hp engine and carbon-fibre bonnet. For collectors in the know, the CRT are very rare, as BMW M GmbH made just 67 cars compared to 150 of the GTS coupe.

While BMW has just released their new M4 CS, Alpha-N set to work on the M4 Coupé using the tried and tested CRT formula. As with BMW’s own CRT of 2012, the Alpha-N M4 CRT has a purposeful but relatively discreet appearance, with a front air splitter and matching boot lid spoiler both made from carbon-fibre. The rear spoiler creates 53 kg of downforce over the rear axle at 200 km/h and is secured to the bootlid with screws and adhesive.

Improvements to the dynamic performance of the chassis comes from the fitment of a fully-adjustable Öhlins Road & Track Coilover suspension kit, along with larger but lighter R101 LW alloy wheels from HRE Performance Wheels. Sized 9.5 and 11.0x20- inch front and rear, these ultra-light forged alloy wheels weigh just 7.8 kg and 8.2 kg respectively, and are shod with 265/30ZR20 and 295/30ZR20 Michelin Pilot Super Sport tyres.

While the aerodynamics and handling were being sorted, Alpha-N’s engineers also addressed the issue of increasing the output of the BMW S55 TwinPower Turbo straight-six engine. Their EVOX Stage 1 conversion delivers a healthy 520 hp, which can be registered on the vehicle documents by Alpha-N.

In the M4’s cabin a pair of Recaro Pole Position race seats attached to Lightweight mountings place the occupants lower in the car for an improved centre of gravity, and hold them firmly in place under high cornering loads.

Alpha-N would like to thank HRE Performance Wheels / HRE Europe, TPS Performance, Öhlins, Recaro, Lightweight GmbH and Vollverklebt.de for their unstinting support in the creation of their M4 CRT project car.