Kitty Hawk Flyer Isn’t A Flying Car, But It Looks Like A Fun Toy

Google co-founder Larry Page promised a new type of "flying car" with his investment into the startup Kitty Hawk, the likes of which no company has produced before it. Unfortunately, the final product doesn’t exactly conjure up thoughts of concepts like the Aeromobil – but it does look interesting nonetheless.

What it is, essentially, is a giant manned drone. It’s called the Kitty Hawk Flyer, and though you can’t drive it on the road – or take it anywhere near the road, really – you can take it out for a weekend on the lake. It’s completely electric and comes with a set of seaplane-like pontoons to keep it afloat upon take off and landing.

It doesn’t require a pilot’s license or any sort of training to fly, the Flyer is considered an Ultralight Aircraft by the FAA. In fact, the company says that people will be able to learn to fly it "in minutes." The aircraft looks like it’s managed by two controls on either side, with a central screen likely displaying all kinds of useful information. 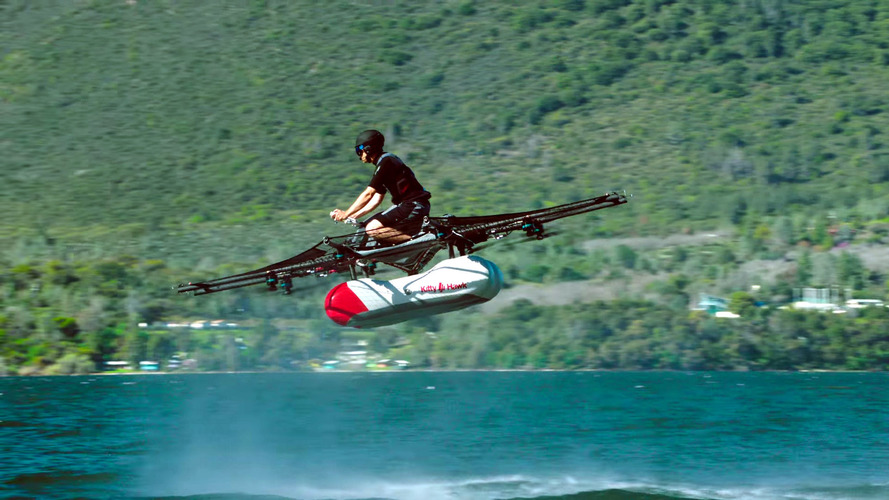 A consumer version will be available to buyers later in the year, and though there’s no set price on the unique flying machine yet, The Verge says that interested buyers can sign up for a $100 three-year membership and get a $2,000 discount off the eventual retail price… meaning it will be expensive.

The Kitty Hawk Flyer is just one of many proposed "flying car" startups. Yesterday we showed you the Lilium jet in action, which also pegs itself as a “flying car,” but more so resembles a personal aircraft. Whatever the case, the skies are bound to be flooded with personal flying aircrafts in the near future if Silicon Valley has its way.