Check Out Weird Exhausts For Quieting the Corvette ZR1 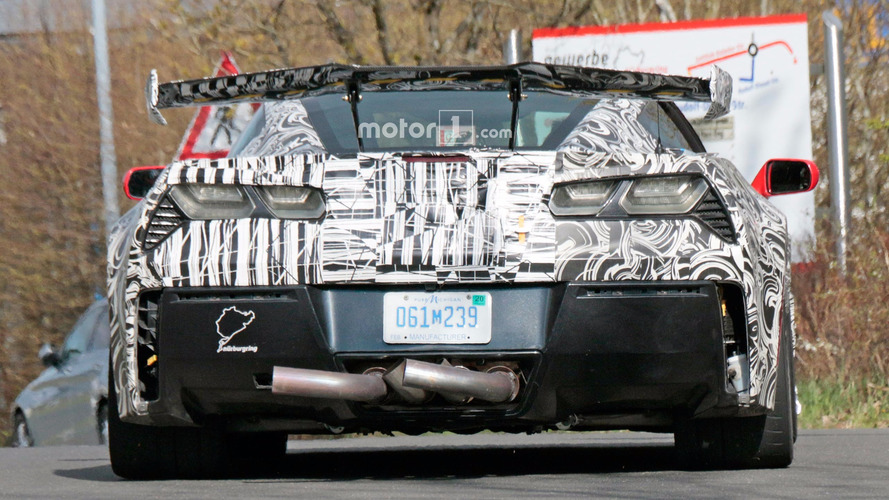 A classic example of finding a bizarre solution to a difficult problem.

While you expect cars on a racetrack to be loud, there are limits at many circuits about how many decibels a vehicle may produce, including at the Nürburgring. The next-gen Corvette ZR1 apparently ran afoul of these rules because the latest spy photos show the upcoming sports coupe with a absurd looking set of exhausts sticking out the back.

According to our spies, the new ZR1 allegedly made more than the 100 decibels that the course allows during industry testing periods. Engineering a new exhaust for the test mule would have taken too much time, so the team did the simple upgrade of extending the pipes. The ‘Vette looked bizarre with these odd growths on its rump, though.

A spy video from the ‘Ring also lets us hear a ‘Vette test mule with the extended pipes. The car is still quite loud with them, though. The hills are alive with the sound of the roaring V8’s gasoline-fueled music.

With the mid-engine Corvette on the imminent horizon, the ZR1 could be the ultimate evolution of the coupe’s traditional layout for the foreseeable future. Under the hood’s power dome, evidence suggests the car could have the new LT5 V8 with dual-overhead cams replacing the ‘Vette’s usual pushrods. Output is reportedly around 700 horsepower (521 kilowatts). The ten-speed automatic from the Camaro ZL1 might be an option, in addition to the model’s existing seven-speed manual.

Look for Chevrolet to officially debut the ZR1 in August and for sales to begin in 2018. By that point, expect the Vette’s engineers to come up with a more elegant solution for managing the amount of decibels it produces.