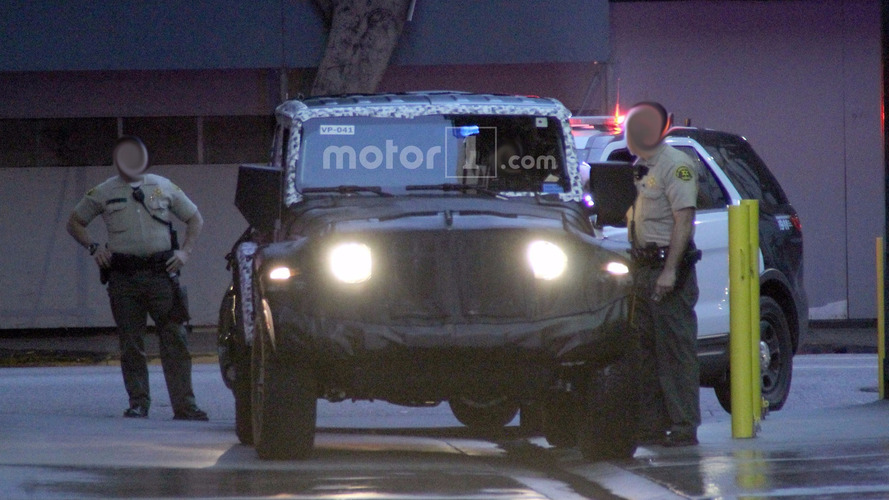 Downtown Los Angeles isn't the best place to run a red, especially when people with cameras are nearby.

This time around, cameras weren’t the only thing to catch this Jeep Wrangler prototype on the streets of Los Angeles. Presumably spooked by an up-close camera and not keen on giving the photographer an extended at-rest opportunity to click off shots, the driver booted the heavily camouflaged Jeep through the red light. LA officers were not impressed, but the rumor is they only gave the driver a warning.

In the meantime, a few up-close photos were nabbed but they don’t reveal too much we don’t already know, especially since a couple uncovered photos leaked last month. Jeep is obviously keeping the next-generation Wrangler close to its boxy roots, though things will be a bit less chunky and upright underneath all that camo. The hood certainly appears longer, and while we can’t see the rooftop in these shots, previous Wranglers have been seen with removable roof panels for open-air enjoyment on hardtops. We also expect to see LED fender lights, and possibly LED tail lights as well.

It’s quite possible that Jeep will unveil the 2018 Wrangler later this year at the Los Angeles Auto Show, with sales beginning early next year. It should have a range of power options including a turbocharged four-cylinder and the familiar 3.6 V6, with hybrid powertrains sure to follow. Shifting the Wrangler though town or trails will likely be an eight-speed automatic or six-speed manual.

Of course, the Wrangler’s claim-to-fame is off-road prowess, and to that end Jeep officials say such abilities will be improved. Given what we’ve seen of everything so far, and especially after our recent Jeep experience in Utah, we don’t think purists of the brand have anything to be worried about.