It’s been to the South Pole — but how does it stack up in Bedfordshire?

I’m sat in a Hyundai Santa Fe somewhere near Leighton Buzzard in Bedfordshire. It all feels very normal: comfortable, leather seats hold me in place, while a seven-inch color infotainment system offers satellite-navigation and DAB radio. I could be any other SUV driver, out on the school run or popping to Tesco. Only, I’m sat extremely high up, and there are no rear seats in place.

This Santa Fe has been modified for a very special expedition. In December, it became the first passenger vehicle to conquer the Antarctic, driven by legendary explorer Sir Ernest Shackleton’s great grandson, Patrick Bergel.

Edging the vehicle forwards towards some sandy obstacles — we’re in a quarry — things still seem relatively civilized. There’s a sloshing noise from the rear — that’ll be diesel in the 230-liter internal fuel tank — while creaks and groans hint at modifications carried out underneath. There are the huge tires, for a start: 38 inches high and 15.5 inches wide, which provide a weird floating sensation as we pass over minor lumps and bumps (quarry trucks and the like) without feeling a thing. 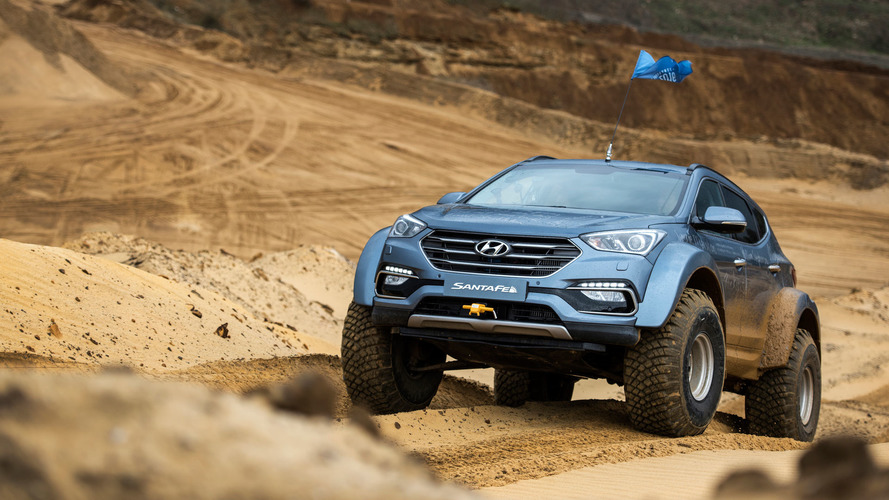 With these mammoth tires fitted (note the steel wheels are just 15-inch — smaller than the standard alloys), portal gears have been fitted inside the wheel hubs to prevent the vehicle being ridiculously overgeared and allow it to cope with low speed maneuvers. Everything else, including the engine and transmission, is completely standard.

My instructor tells me to select "Sport" mode. Just like you can in a standard Santa Fe, this sharpens the throttle response — important when you’re driving in difficult conditions and don’t want the slightest delay — and keeps the revs up. This is preferable in sand to prevent bogging down.

As you’d expect for a four-wheel-drive with half a meter of ground clearance, along with approach and departure angles of 37 and 39 degrees respectively, it’s pretty unstoppable off-road. We’re being led by a marshal in a pick-up truck, who soon admits defeat and lets us go where four-wheel-drives don’t normally go. 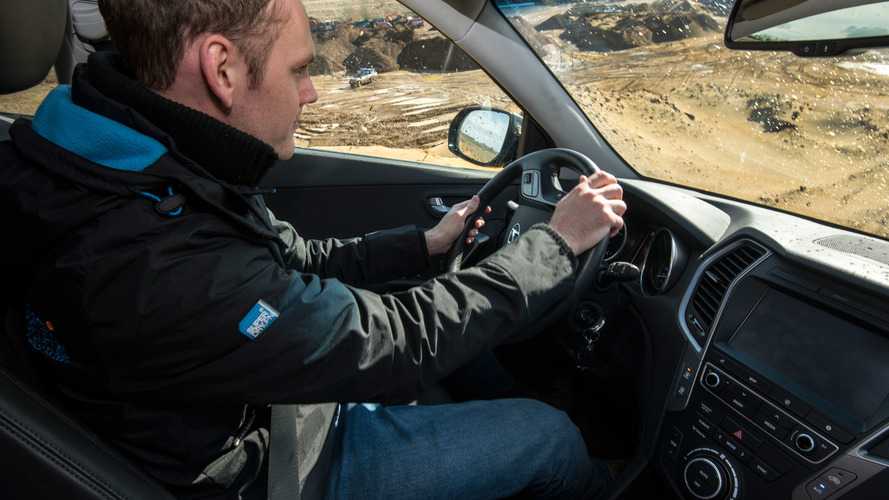 If this sounds a bit adventurous, it’s nothing compared to the expedition completed in this very car by Bergel and his team.

“The initial idea to take what is essentially a standard road vehicle all the way across the Antarctic came from Hyundai,” explains Bergel.

“This was a proper expedition with a challenge to accomplish what nobody else had done before. So it was a fairly easy decision to decide to go. It was the right time for me — and I grabbed it.”

Although the 2.2-liter engine is running on diesel for our drive, that wasn’t the case in Antarctica. Fuel stations are hard to come by in the wilderness, but there are, occasionally, aviation fuel dumps. That’s why the team filled the huge tank with Jet A-1 fuel combined with additives to improve lubrication. 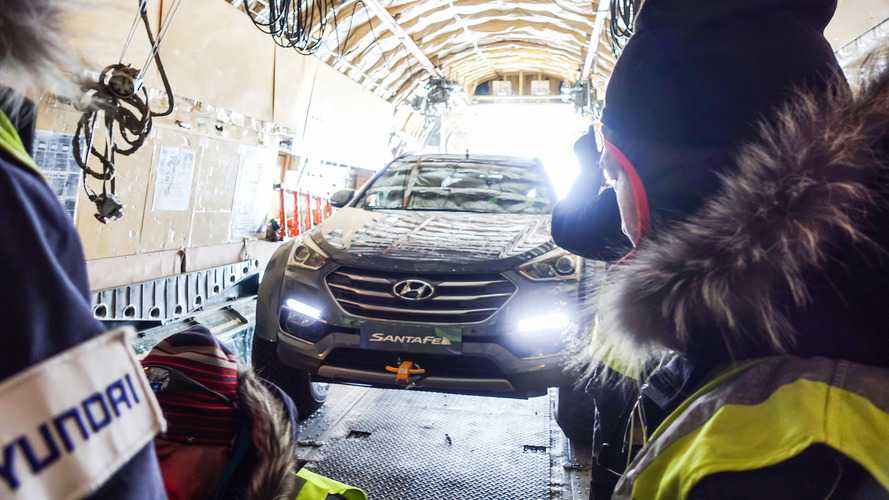 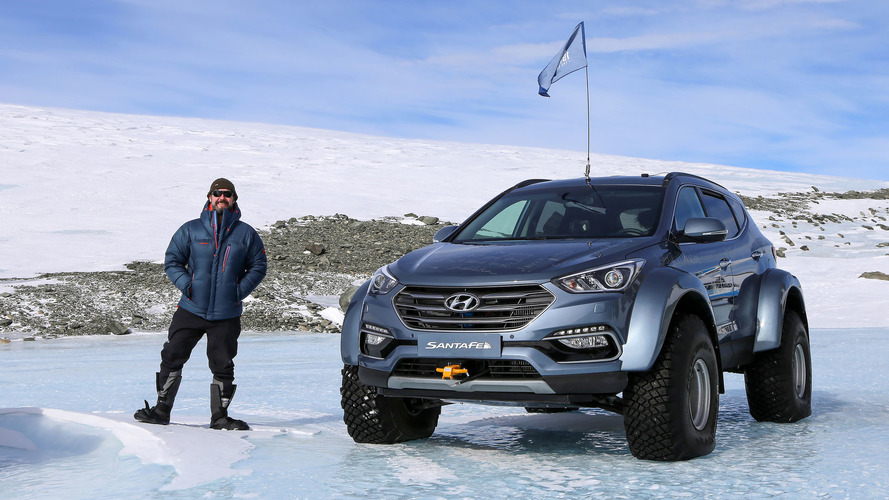 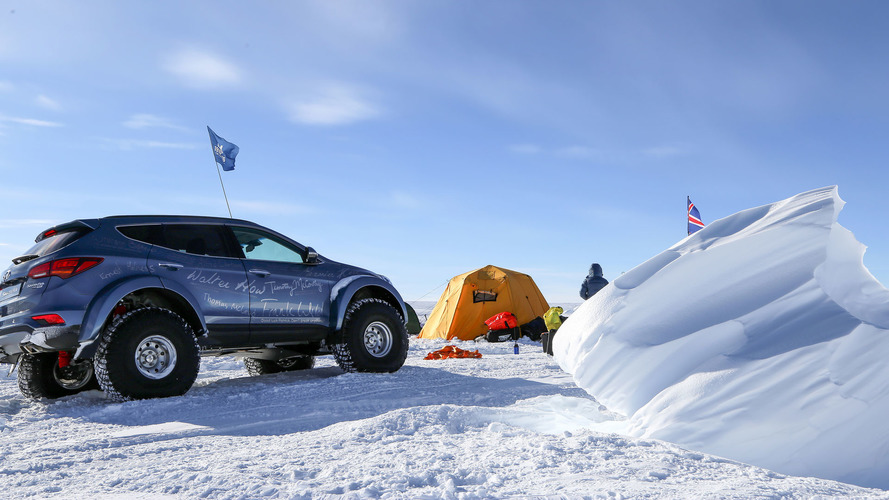 “People who have a lot of experience of Antarctica know what it does to machinery: basically, anything and everything falls apart,” says expedition leader Gísli Jónsson, who was responsible for adapting the Santa Fe.

“People have a lot of mechanical problems with vehicles out there. Even the big machines crack up and break apart, skis fall off, tracks snap and gearboxes fail.

“This was the first time this full traverse has ever been attempted, let alone doing it there and back. There are established routes to the South Pole and to the base station at McMurdo but no passenger car has done anything remotely close to what we planned to take on.”

Reliability issues were few and far between, with the longest delay for repairs just 45 minutes — traced to a loose bolt.

Driving up to 20 hours a day, the team completed the expedition in 30 days, crossing 3,600 miles (5,794 kilometers) of icy terrain and dealing with temperatures as low as minus 28 degrees Celsius (-82.4 degrees Fahrenheit). The team successfully reached the South Pole — a personal dream of Shackleton’s that he never managed himself.

“Compared to what my great grandfather did, this was one thousandth as hard and I don’t think we’re under any illusions about that,” said Bergel.

“No comparison, we had modern appurtenances, comparative luxury and an amazing vehicle. But it’s still quite something to be the first to do this in a wheeled passenger vehicle.”

Gallery: Driving the Antarctic (and Bedfordshire) in a Hyundai Santa Fe