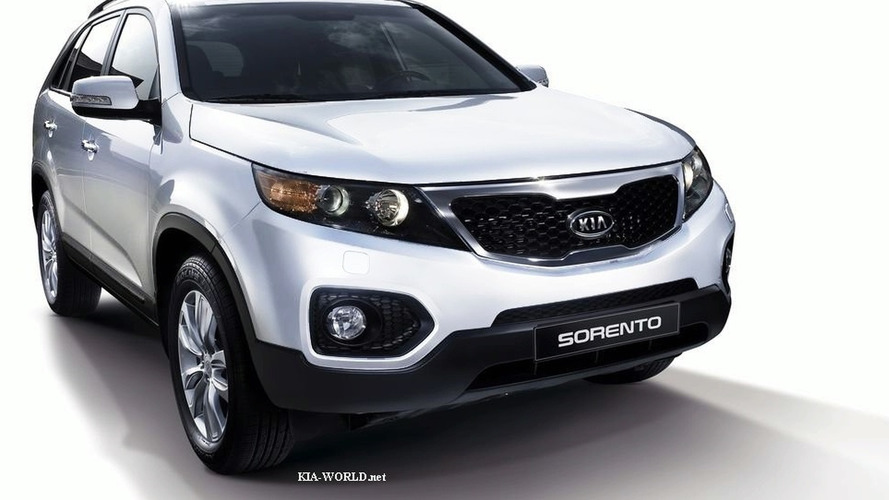 Official photos of Kia's 2010 Sorento, set to debut in April Seoul Auto Show, have surfaced along with details of its new diesel engine

All of the moving and shaking going on at Kia is leaving no vehicle untouched, and following the introduction of the all-new Soul and Forte the company will be unveiling a 2010 upgrade and redesign for the Sorento crossover at the Seoul Auto Show next month. The first official Sorento photos have just surfaced at Kia-world.net.

At a glance, it looks like Hyundai has merely warmed over the current vehicle with its new, more distinctive styling. There's more to the 2010 Sorento than Kia's new chrome grille and quad headlamps, however. The wheelbase is slightly shorter, and overall length and width have grown. Overall height has decreased slightly as well. The silhouette remains similar, with a wrapped hood and more aggressive front bumper treatment visible in the photos.

For Asian and European markets, the 2010 Sorento will get its first diesel powerplant. The 2.2 liter, 200-horsepower "R-diesel" offers 14.1 km/l fuel economy, making it number one in the Korean market. Gasoline engines will include a 2.4 liter four-cylinder and 3.8 liter V6, and a six-speed automatic transmission is also in the cards. Kia will release more powertrain and equipment information when the 2010 Sorento is officially unveiled next month in Seoul.