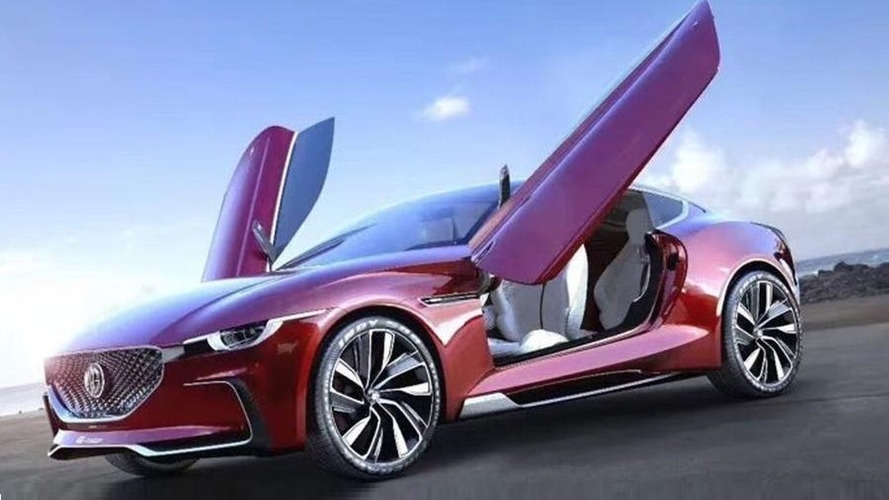 A set of grainy official images depicting MG’s new Shanghai-bound concept have emerged onto the World Wide Web ahead of a public debut in a couple of days. The four-seater coupe adopts a stylish exterior design with butterfly doors and a prominent front grille with a large MG badge in the center, which by the looks of it lights up thanks to LEDs. At the top corners of the Mercedes-inspired glitzy grille are the Mazda-like sleek headlights lending the showcar a high-tech appearance also enhanced by the implementation of cameras instead of regular door mirrors.

Sitting on beefy two-tone alloy wheels, the MG E-Motion appears to have a massive panoramic roof and chunky side skirts. The back of the car hosts one of the biggest diffusers we have ever seen along with sweptback taillights and a neatly integrated spoiler lip. As it’s the case with the front bumper, the rear one features “E-Motion” lettering in white to highlight the concept’s moniker and the fact it has an all-electric powertrain.

Details about the electric motor(s) have not been disclosed, but reports are indicating the stylish coupe does 0-62 mph (0-100 kph) in less than four seconds. The unspecified battery pack allegedly has enough juice for a range of more than 310 miles (500 kilometers), which frankly seems too good to be true.

The E-Motion concept might be more than just for show taking into account Autocar has it on good authority a production version is being considered to mark MG’s return to sports cars under China’s SAIC ownership. A spokesperson for the automaker has revealed both the platform and powertrain are “near-production ready.” If the feedback will be positive following the car’s debut this week at Auto Shanghai, a road-going model could come in about a year and a half from now.