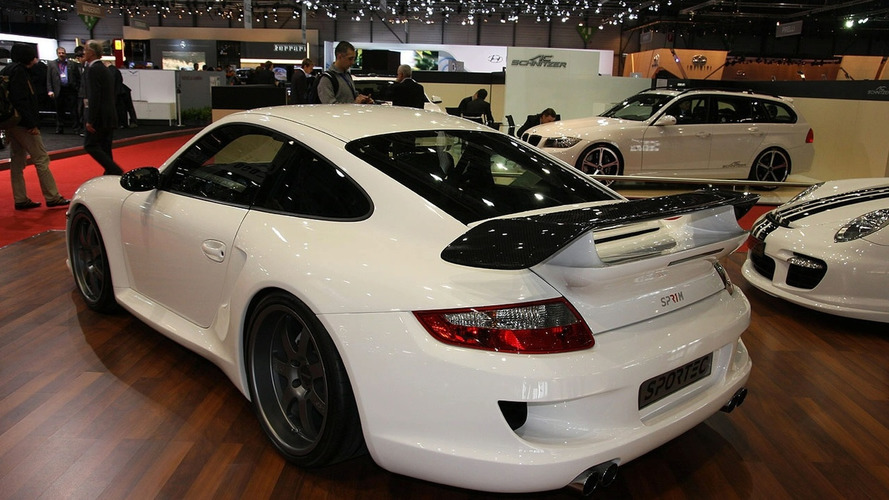 The Sportec SPR1 M quietly breaks loose at Geneva. The unassuming Porsche 911 Turbo-based tuner special is not to be taken lightly because of its 858hp engine.

One of the Sportec Geneva monsters has been tracked down to a space surrounded by the AC Schnitzer stand on one side and Mitsubishi on the other. The Sportec SPR1 M is now on exhibition at the Swiss show where it is looking mildly menacing. Only a few details like the outstanding rear wing and massive wheels hint at something more than normal. Those kind of looks mask a car that is probably capable of shooting off from 0 - 100km/h in under 3 seconds.

The Porsche 911 Turbo forms the foundation for the SPR1 M so one could say the groundwork is already quite solid from the start. Sportec was not satisfied however and proceeded to rebuild the car from scratch using mostly carbon fiber. The result is a car that weighs as much as the post-it paper tag on which its price will be printed.

The T80 M engine package positioned in the vehicle gives it power of 858hp (631kW) and maximum torque of 880Nm. While Sportec prepares its performance figures we can guesstimate that the SPR1 M will go under 3 seconds because its standard sibling the SPR1 is less potent at 800hp and that car does 0 -100km/h in 3 seconds.