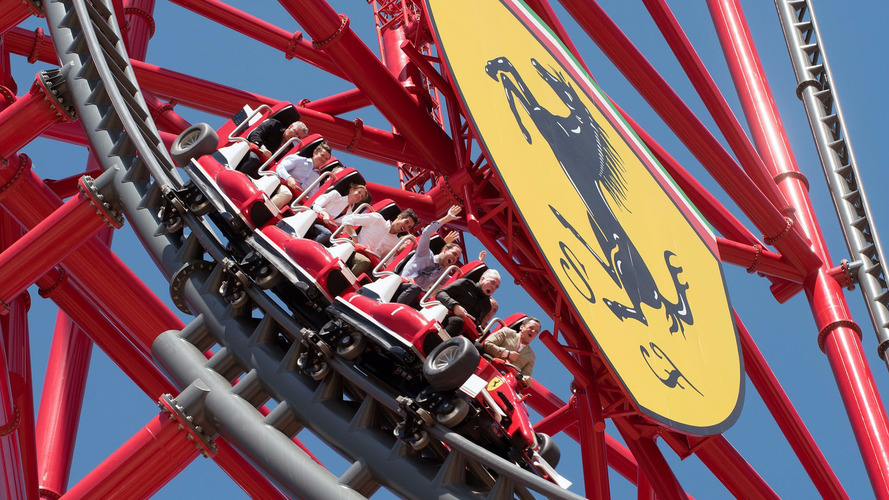 Fortunately, you’ll find nothing of the sort at Spain’s latest theme park. Ferrari Land encompasses over 750,000 square feet of space within the PortAventura World resort at Salou, located on Spain’s Costa Dairada along the Mediterranean Sea. The park features 11 attractions, with the headlining ride being Red Force – the highest and fastest vertical accelerator in Europe. The coaster catapults riders in F1-shaped cars from 0 to 112 miles per hour in five seconds before sending riders skyward 367 feet. It also occasionally leads to riders getting hit in the face by pigeons, but hey, it's a small price to pay for such epic entertainment.

If that’s a bit too much adventure, the park is full of other Ferrari-themed activities. Racing Legends and Flying Dreams are rides that literally fly people through the history of F1 and GT. Ferrari Gallery is an interactive experience for visitors to see Ferrari’s history. And if that’s still too much, there are driving simulators galore, a pit stop experience, and of course there are classic Ferraris to behold.

Ferrari Land is the second theme park based on the famous Italian brand. Ferrari World Abu Dhabi opened to much fanfare in 2010 and has enjoyed considerable success, having received an award for the Middle East’s top tourist attraction in 2015 at the World Travel Awards.

Ferrari Vice Chairman Piero Ferrari was on-hand to officially open Ferrari Land Spain on April 14, symbolically pressing a big red start button to kick things off. Looks like we have another automotive bucket-list destination to add to our growing itinerary.

Tarragona (Spain) – After the official event at which Vice Chairman Piero Ferrari pressed the symbolic starter button, Ferrari Land has now also opened its doors to the public. This is the first Prancing Horse theme park in Europe and the second in the world after Ferrari World Abu Dhabi. It occupies an area of 70,000 square metres within the PortAventura World resort, about an hour away from Barcelona. Ferrari Land is obviously for fans and enthusiasts, but above all it is a place where families can have fun and at the same time explore the history of the marque.

There are 11 attractions on offer. The most spectacular is unquestionably Red Force, the highest and fastest vertical accelerator in Europe, at 112 metres high and with a top speed of 180 km/h reached in just five seconds: an unforgettable experience for thrill-seekers. Racing Legends and Flying Dreams are two of the park’s most innovative experiences, allowing visitors to fly (literally) through the history of F1 and GT. Ferrari Gallery is an interactive journey through the history of the marque. Visitors can have a go at a pit stop or experience the excitement of driving a GT car with Maranello Gran Race and there are also plenty of simulators for adults and children. Finally, anyone wanting more thrills can try Thrill Towers; two towers in the shape of a piston for an experience of the thrill of free fall.