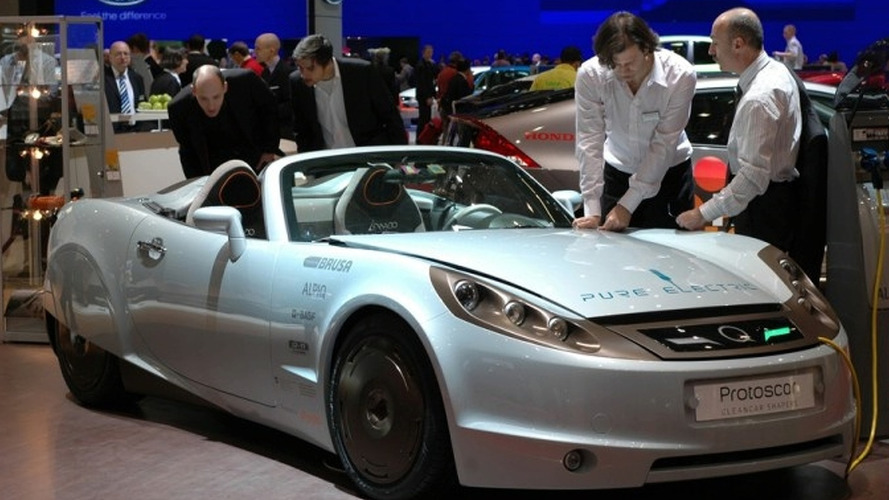 A fully-built concept model of the Protoscar LAMPO can be seen in one of the Geneva Motor Show's exhibition halls. The LAMPO has two lithium-ion batteries and a range of 200km.

As scheduled the Protoscar LAMPO currently stands side by side with Kia cars at the Geneva Motor Show. The LAMPO is an electric vehicle that was last announced in February, a week before its Geneva debut. Rather appropriately the word "lampo" means flash or lightning in Italian.

In what may be one of the first fully electric sports car concepts to use 4WD, the LAMPO sends power to all wheels at a total of 268hp (200kW) and 440Nm. A fully-charged unit only has a range of 200km (124 miles) for now. Performance tallies have not been divulged yet but perhaps the car's speedometre which reads up to 280km/h could give a slight indication of its abilities.

What is known from Protoscar's comments is that the car will recharge fully in about 12 hours when using a normal 240V power outlet. A simple systems upgrade that would see this number 12 hours cut down to 6 hours would be available at an extra cost. Like other future cars of this nature the LAMPO uses regenerative braking technology to give back energy to the two lithium-ion battery system.

Lookswise the LAMPO stands out from its current electric counterparts mainly through the rear wheels which are covered. LED daytime running lights are built into a front grille that looks like it carries the Joker's wide smile. Again instead of being a blue hue the LEDs emit a green light just for that extra reminder of the car's eco credentials.