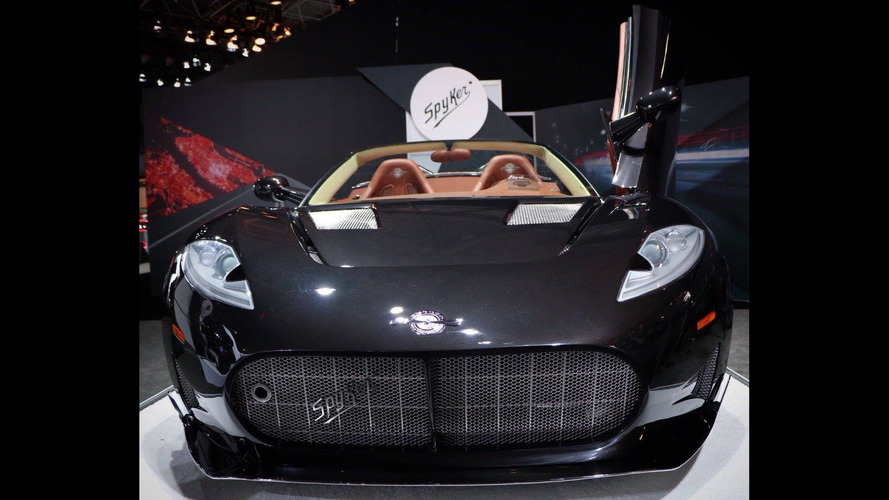 The Koenigsegg-powered droptop with a fantastic interior has landed in North America.

Born in 2000 and managing to overcome some major financial hurdles in recent times, Dutch automaker Spyker is now back in business. Last month in Geneva, company founder and CEO, Victor R. Muller, announced a partnership with Koenigsegg from where the C8 Preliator (“fighter” or “warrior” in Latin) will get its power. It’s a naturally aspirated 5.0-liter V8 developing a meaty 600 hp (447 kW) and 443 pound-feet (600 Newton-meters) of torque.

We should point out the C8 Preliator Coupe introduced at the 2016 Geneva Motor Show had an Audi-sourced supercharged 4.2-liter V8 generating 525 hp (386 kW) and 443 lb-ft (600 Nm), but now Koenigsegg’s V8 will take its place in the engine bay. In charge of sending output to the road will be a six-speed manual transmission enabling the Spyder variant reach 62 mph (100 kph) in a mere 3.6 seconds en route to a maximum velocity of 201 mph (322 kph).

Spyker wishes to point out the C8 Preliator is the only “series produced sports car” in the world with 600 horsepower to have a manual gearbox. To be fair, at only 100 units, the Spyder version is not what you would call a regular production model.

“Although our peers believe the manual is virtually dead, and many have vowed we would never see them again, our discerning clients have clearly spoken out in favor of the manual.”

Production of the carbon fiber-bodied C8 Preliator Spyder is scheduled to begin in the summer of 2018 through CPP Metalcraft in Coventry, U.K.

Besides teaming up with Koenigsegg, Spyker is also working with Lotus for what will become the brand’s first SUV. Previewed by the 2006 D12 Peking to Paris concept, the model might debut in production guise at next year’s Geneva show, according to Muller.

For your viewing pleasure, we’ve attached the images to the gallery from the 2017 Geneva Motor Show where the C8 Preliator Spyder received its debut.

Spyker have returned to the New York International Automobile Show with the C8 Preliator Spyder featuring its most significant technological advancement since the inception of the Dutch creator of hand-built super sports cars in 2000.

Spyker Founder and CEO Victor R. Muller announced at the Geneva International Motor Show last month, that Spyker has signed an Engine Supply Agreement with Christian von Koenigsegg, Founder and CEO of Koenigsegg Automotive AB (“Koenigsegg”) from Angelholm, Sweden. Both the Spyker C8 Preliator as well as its Spyder version, making its North American debut at the New York International Automobile Show today andon display with Manhattan Motorcars, will be propelled by the new V8 engine.

Victor R. Muller, Spyker’s Founder and Chief Executive Officer, said: ”Spyker is delighted to be back at the New York International Automobile Show to unveil the new Spyker C8 Preliator Spyder in one of its most important markets, New York. Historically Spyker has sold half of its production to the United States of America of which a very large number of cars were sold in this state through Spyker's first dealer in the USA, Manhattan Motorcars”.

The normally-aspirated, dry-sump 5-litre V8 engine boasts 600 hp and 600 NM of torque. Koenigsegg has developed this engine specifically to meet Spyker’s needs and the Koenigsegg V8 will be installed in every Spyker C8 Preliator, both the Coupe, which was launched in March 2016, and the new Spyder, and replace the Audi V8 powertrain as from car one. The engine will be mated to a six-speed manual transmission.

Spyker translated its timeless aviation inspired design to the ultimate convertible, culminating in the Preliator Spyder. The design reflects the progress made with the Preliator from concept towards a production car. The Spyder, in Ascot Bronze, on display at the New York International Auto Show features an automatic soft top and a saddle Litano leather interior with honeycomb contrasted stitching.

Spyker’s production of the C8 Preliator Spyder will be limited to 100 units only.

Victor R. Muller, Spyker’s Founder and Chief Executive Officer, said on the occasion: "This is our single most important advancement in technology since I founded Spyker in 2000. I have always admired the amazing technologies developed by Christian von Koenigsegg and his dedicated team creating one of the most sophisticated cars and engines on the planet, and I am convinced our Spyker C8 Preliator clients will tremendously enjoy the huge performance leap.

The 600 horsepower V8 engine with manual gearbox, ticks all the boxes of the Spyker brand; it's Bold, Pure, and Engaging but foremost hyper-exclusive hence a perfect match to the Spyker C8 Preliator coupe as well as the Spyder we unveil this morning. In fact, this is the only 600 horsepower series produced sports car available with a manual gearbox on the market today. Although our peers believe the manual is virtually dead, and many have vowed we would never see them again, our discerning clients have clearly spoken out in favour of the manual: the Koenigsegg powered Spyker C8 Preliator Spyder will provide an engaging purist driving experience second to none tantalising all senses. The howling sound of this normally aspirated engine will be unmistakable and thrilling.

The “Preliator” name, which means "fighter" or “warrior” in Latin, pays tribute to Spyker aviation heritage: "Fighters" are warplanes as made by Spyker between 1914 and 1918. But even more so, “Preliator” symbolises the battles Spyker faced and won in the past.

The Spyker C8 Preliator Spyder, of which we will make a mere 100 units and production will start by summer 2018, is made for discerning owners who appreciate our attention to detail and the bespoke features we have offered them for over a decade and a half now. Our dedicated crew will assemble the cars in Coventry, UK, together with CPP Metalcraft, our very first partner since we started Spyker back in 2000, as of the last quarter of this year. All Preliators will feature carbon fibre bodies.

When I designed the Spyker C8 Preliator Spyder I wanted it to ooze the sheer tenacity and determination with which we created a new dawn for our company and by launching it here today we pay homage to the Latin axiom which has adorned the Spyker propellor logo since 1914 “Nulla tenacia invia est via” - for the tenacious no road is impassable”.

Christian von Koenigsegg, Founder and Chief Executive Officer: “I have known Victor and Spyker for way over a decade, and we obviously share the passion for handcrafted and bespoke automobiles. I have always admired Spyker’s tenacity and their commitment to building one-of-a-kind cars that stay true to a well-honed ethos and always been impressed by their amazing craftsmanship and beauty. The attention to detail is amazing. Spyker cars have always been bespoke in every aspect apart from their drivetrain. Therefore it gives us great pleasure to work with Spyker to design and produce an engine specifically for them that will suit the handcrafted, luxurious and high-performance nature of all Spyker cars. In terms of performance the introduction of our light, responsive and powerful engine will transform the driving experience of the Preliator.”