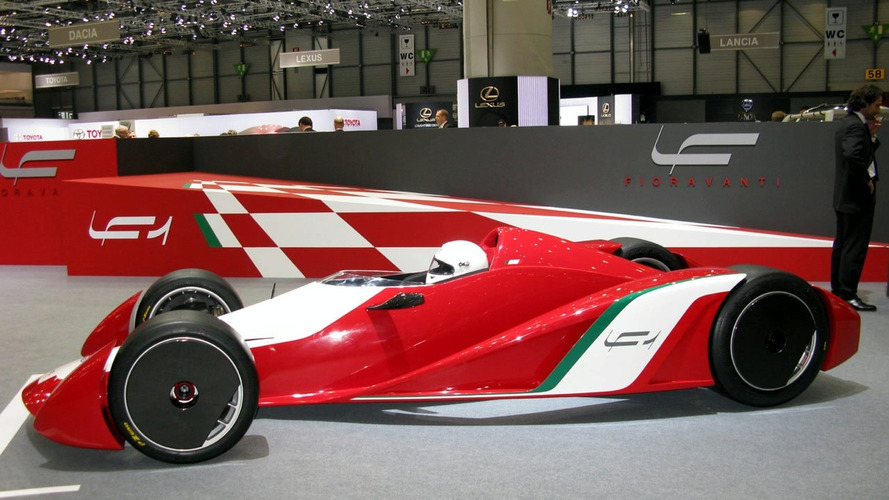 Fioravanti has removed the covers off the LF1 race car concept at Geneva. The LF1 epitomises where F1 should be in terms of C02 emissions, powerplants, aerodynamics and costs.

Official statements from the Fioravanti transport design company confirm that the LF1 car is indeed a pure race car. There is currently no intention of adapting the LF1 to normal street conditions as recently speculated. The fact is the LF1 is Fioravanti's interpretation of what a future Formula One car should look like taking into account requirements for budget reductions, C02 emissions and more overtaking opportunities.

Fioravanti spent a good deal of time working on aerodynamics which it says contribute to a large amount of spend in F1. As such the LF1 has no rear wing for downforce to speak of, and the body is compact and highly integrated. Fioravanti aims to attain a figure of close to zero lift by integrating the front wing to the front end, installing a rear diffuser and placing the rear wing quite low at the back. An active suspension system is advised for the LF1.

No more V-shape naturally aspirated engines in the F1 world of Fioravanti. The LF1 takes a 1.8-litre turbo engine in accordance to proposals for the 2012 F1 season. Other parts installed include radiators, intercoolers, an advanced K.E.R.S. and 18-inch wheels.

According to the Italian marque the F1 problem of overtaking or lack thereof can be solved by the combination of these and other factors. It says turbulence is greatly reduced and thus drivers would be able to overtake more frequently for a better audience spectacle.