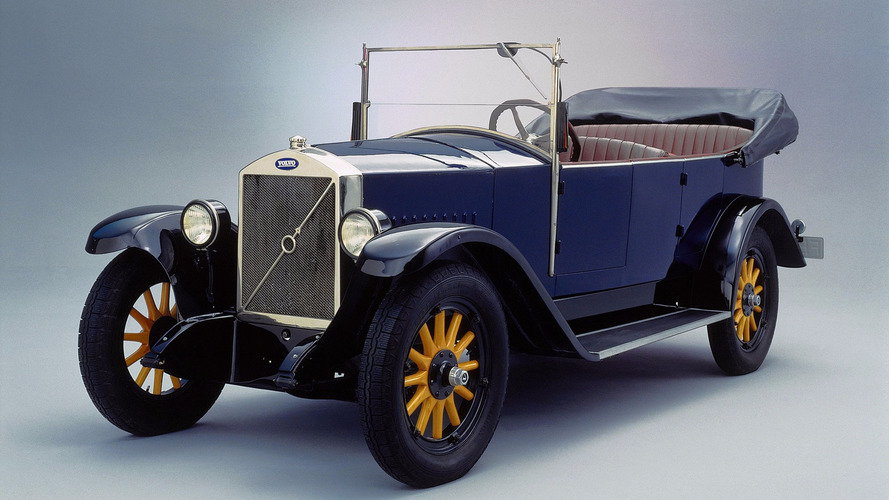 The first car from Gothenburg had no roof and used a wooden frame.

When Volvo’s sweet new second-generation XC60 officially starts production later this month, it will carry more than just people and things. 90 years ago – on April 14, 1927 to be exact – the very first Volvo was introduced to the world. The manufacturer views the beginning of XC60 production this month as something of a celebration for that milestone, carrying symbolic meaning of the company’s legacy and enduring success.

“Volvo is very proud of its history. The past 90 years have been exciting, but the 10 years left until the 100-year anniversary may come to be more exciting as industry focus shifts to autonomous driving, electrification and connectivity,” says Håkan Samuelsson, chief executive of Volvo Cars. “The new XC60 is in many ways the embodiment of these trends.”

That original Volvo in 1927 was called the ÖV4, which literally stood for Öppen Vagn or open carriage for the English speakers out there. The number four represented the car’s 1.9-liter side-valve four-cylinder engine, which was paired to a three-speed gearbox and mounted on a wooden frame made from ash and beech trees. The engine produced 28 horsepower, enough to propel the ÖV4 to a top speed of 56 miles per hour. It was an attractive automobile for the day, but being a roofless car in Sweden it wasn’t exactly a hot seller. Only 275 were built from 1927 to 1929

The XC60, on the other hand, is a hot seller. The previous generation enjoyed continual year-over-year sales growth since its introduction in 2008, ultimately becoming the best-selling premium mid-size SUV in Europe while accounting for 30 percent of Volvo’s total global sales. Before production on the new model begins later this month, the first-generation XC60 will top 1 million vehicles sold.

In other words, the new XC60 has some seriously big shoes to fill. With all that we’ve seen of it so far – from it’s stylish exterior to the plethora of luxury inside and a hybrid variant with 407 horsepower – we expect the next-generation XC60 will do just fine.

Volvo Cars, the premium car maker, will this month start production of its new XC60 mid-size SUV in Gothenburg, Sweden.

This first Volvo sold a total of 275 vehicles in its lifetime, which was modest even in those days. The new XC60 replaces one of the best-selling models in Volvo’s 90-year history.

The new XC60 replaces the old

Volvo’s original XC60 became a phenomenon, with climbing sales every year since it was introduced in 2008. Seven years after it was revealed, it became the bestselling premium mid-sized SUV in Europe, and in its ninth year it is still the best seller.

The current XC60 today represents around 30 per cent of Volvo’s total global sales, and this month the number of original XC60s produced will surpass 1,000,000.

“Volvo is very proud of its history. The past 90 years have been exciting, but the 10 years left until the 100-year anniversary may come to be more exciting as industry focus shifts to autonomous driving, electrification and connectivity,” says Håkan Samuelsson, chief executive of Volvo Cars. “The new XC60 is in many ways the embodiment of these trends.”

The new XC60 is one of the safest cars ever made and offers the latest in safety technology, including the new Oncoming Lane Mitigation system, which uses Steer Assist to help mitigate head-on collisions.

Volvo’s semi-autonomous driver-assistance system, Pilot Assist, which takes care of the steering, acceleration and braking on well-marked roads up to 130 km/h, is available in the new XC60 as an option.

With the new XC60 now on the market and gradually becoming available for order on markets across the globe, Volvo is set for another record year of sales in 2017.

Volvo’s founder, Assar Gabrielsson, saw an opportunity for car manufacturing in Sweden after having observed the growing auto industries in the US and Europe from his position within sales at the Swedish ball bearing maker SKF, a supplier to the car industry.

The first mass-produced Swedish car was quite a conventional vehicle, with elements of American car design, a wooden frame made of ash tree and beech, a 1.9-litre side-valve engine and artillery wheels with wooden spokes.

Only one colour combination was available: dark blue with black fenders.

Despite all these changes over the past 90 years, one thing has remained the same: the company’s commitment to making the world’s safest cars.