Dodge Demon Would Still Lose To Tesla In A Race 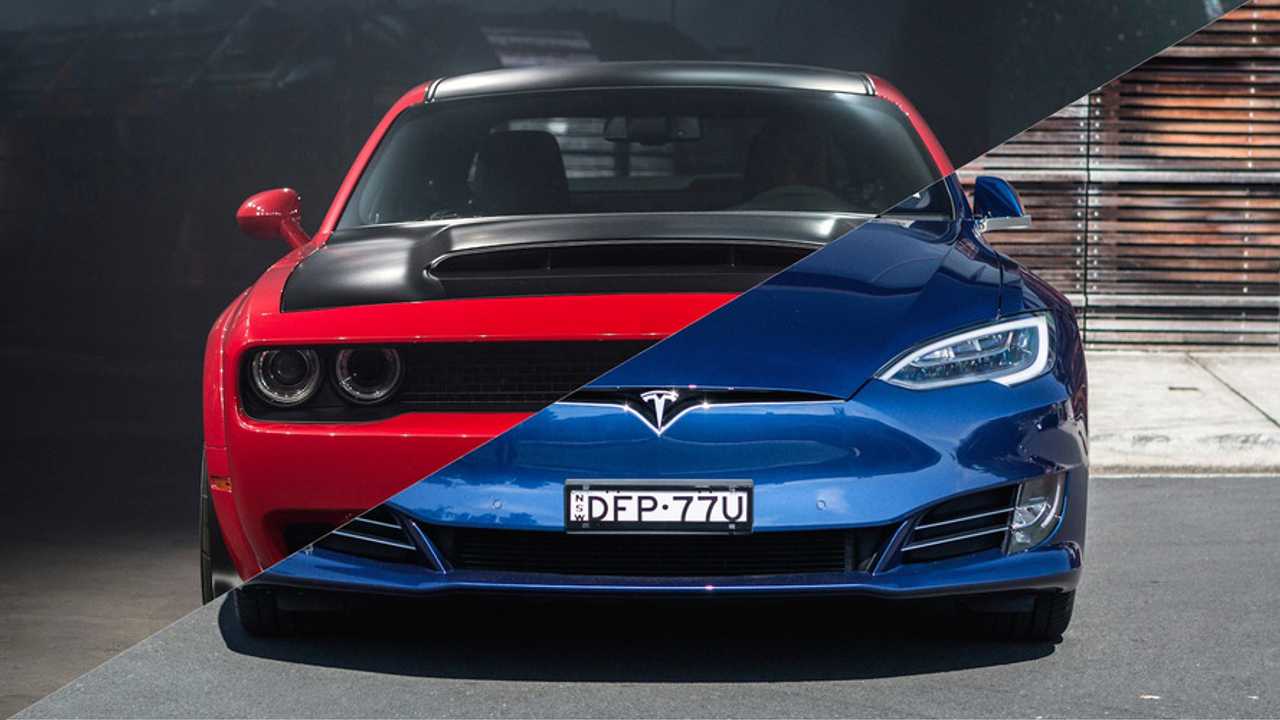 The Tesla Model S will probably beat it, and do it with all of its seats.

One day after the debut of the 2018 Dodge Challenger Demon, we bring you a second opinion from our sister site, InsideEVs.com, about whether or not this purpose-built drag racer is actually the quickest, as Dodge claims. There's another speed demon that's been dropping its 0-60 times on a regular basis, and it runs on electricity.

We recently reported that Jeep has decided to exclude the Tesla Model X P100D from its list of SUVs in order to lay claim to having the “quickest” production SUV in the world with the Grand Cherokee Trackhawk.

Now, Dodge has come forward with the “fastest production car” ever produced. It’s the all-new 2018 Dodge Challenger SRT Demon, and they say it can tackle a sprint to 60 miles per hour in 2.3 seconds.

The National Hot Rod Association (NHRA) has banned the Demon due to a lack of safety equipment necessary for its type of performance (it only has one seat and has been substantially stripped down to reduce weight). It’s a street-legal drag car, by every definition.

FCA’s somewhat obvious goal with the new Jeep Cherokee Trackhawk was to be quicker than the Porsche Cayenne Turbo S, the Bentley Bentayga, and the Tesla Model X. This is because, of course, these are the three SUVs to beat in today’s market. While Jeep, with its impressive 3.5-second-0-to-60 stat succeeded in topping both the Porsche and the Bentley, it couldn’t come close to that of the Tesla Model X. So, Jeep just applied a workaround.

Similarly, the Dodge Demon had set out to beat the Tesla Model S P100D, because there is no other production vehicle in the world that even comes close. What better than to premiere the world’s quickest car and the world’s quickest SUV at the last major auto show of the season? And, to beat Tesla twice!

Depending on where you look, or who you talk to, the Demon’s 2.3-second 0-to-60 sprint may have just succeeded in topping the Model S. According to Tesla’s website, the Model S P100D is capable of a 2.5-second time.

However, that information was posted prior to the new Ludicrous Easter Egg updates. If Dodge simply had to beat 2.5 seconds, the challenge may have not been so difficult. But published figures for the Tesla Model S P100D with the new Ludicrous upgrade show a 2.28-second time.

Motor Trend did the testing and is sticking by its methods, and similar real world results have since appeared. We don’t know who did the Demon’s testing, but it’s assumed it was in-house, and we have no idea how the testing was carried out. However, we have exhausting details regarding the Model S’ testing, along with published times, videos, etc.

Did the tested Demon have the optional passenger and rear seat in? Probably not. Elon Musk will be happy to tell you that if you take the seats out of the Tesla, or strip it down (remove the frunk), it will fare even better. For now, for the Demon, we just have a sign that says it’s true.

Did Dodge use the familiar and standard method for testing, which factors in rollout? One would hope so, since this would get the Demon a better time, like that of the Model S. Not testing it this way would be silly, since it would make beating current records even more difficult, and basically defy the laws of physics. And what connects the Dodge to the pavement? Looks like it needs some serious drag radials enabling 1.8 g to get that number.

If the Dodge were tested factoring rollout, then the Model S is the winner, by some hundredths of a second. That is, if the Demon's 2.3-second publicized time is not rounded in any way. It’s almost certain that it wasn’t precisely 2.3, but rather 2.34, or 2.29 or something similar. If Dodge didn’t include rollout, a few tenths of a second would be added to its time, like that of the 2.53-second P100D run. And again, the two cars’ stats would be within mere decimals. But based on modern math, the Model S would still take the win.

On the contrary, if the Dodge Challenger SRT Demon pulled off a 2.3-second stat without an included roll-out, this would be astronomical. If this is honestly the case, then the P100D will be defeated with an (*) asterisk… if you can get past all the various “non-real world” scenarios, and “drag radials,” “optional” seating, and non-NHRA track-only. So ultimately, does it even matter?

Video (below):  How “easy” is it to even attempt the 0-60 mph run?  Check check out the “easy” instructions from the 2:02 minute mark of Dodge’s official  Challenger SRT Demon demo ride.

Video (below):  Now let’s compare that to Tesla’s  verified 0-60 mph run in 2.28 seconds.  Look at all that ‘pressing the accelerator’ a driver has to do to repeat that performance all day long.

In Dodge’s defense, like the Cherokee Trackhawk, this is a brand-new car, just premiered at the New York Auto Show. Even when it does come to market, it will only be produced in extremely limited numbers. In time, there will be more official stats and tests for comparison.

You better believe that as soon as this new “world’s quickest production car” becomes available, there will be a plethora of tests, races, stats, etc. The truth will eventually be told. By then, however, Tesla will likely release a new Ludicrous Easter Egg that is even faster, or how about optional seats?