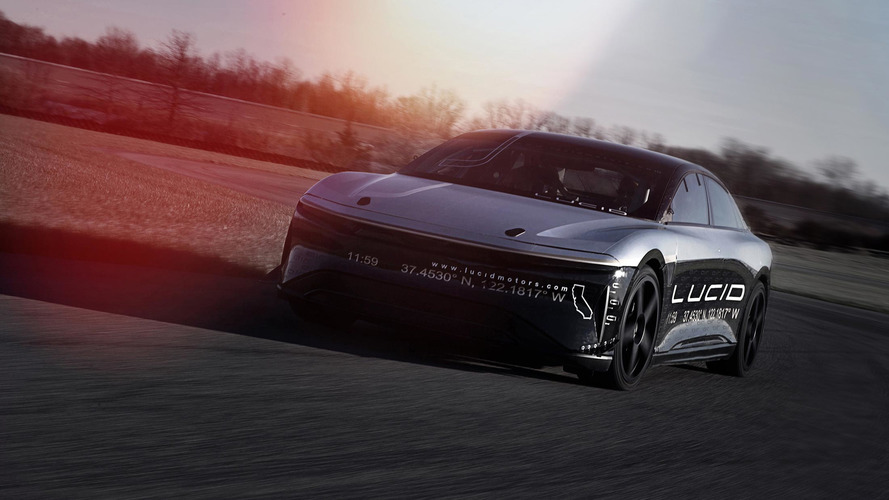 As the first day of the New York Auto Show came to a close last night, the folks at Lucid Motors started getting busy for their big reveal this morning. They rolled in the Alpha Speed Car test model of the Lucid Air, in time for us to get a sneak peek.

This morning, we learned a few details about the modified Alpha Speed Car, most impressively that it recently spend some time at the TRC Ohio automotive proving ground, cruising the 7.5-mile track to, "evaluate high-speed behaviors, including vehicle stability and powertrain thermal management. The test, software-limited to 217mph (350km/h), was successful in demonstrating the capabilities of the car and in finding areas for improvement that could not be properly evaluated in static bench tests." Lucid's director of marketing, Zak Edson, told Motor1 that the car performed well, giving the team a lot of confidence in the car's motor. The next step, Edson said, is to go back to the track without the top-speed limiter in effect and see what happens. You can watch a short promotional video of the Ohio tests below. Lucid Motors also tested the Air in winter conditions a few months ago up in Minnesota.

All of this testing should give Lucid the data it needs to get the Air ready for production. As we learned a month ago, the consumer version of the Air will start at just $60,000 (or $52,500 after federal tax credits) when it is scheduled to come to market some time in 2019. The higher-end models, which will likely cost over $100,000, will offer 1,000 horsepower and have enough batteries to power it for over 400 miles. You can find more details on the Air's specs here.

The Lucid Air was first unveiled in December 2016. The all-electric sedan combines forward-looking design with groundbreaking technology to establish an entirely new class of vehicle. Featuring full-size interior space in a mid-size exterior footprint, the autonomous-ready Air will be available with up to 400 miles of range and 1,000 horsepower.

The Air will be manufactured in Casa Grande, Arizona. The factory, first announced in November 2016, will come online in 2019 and build 10,000 vehicles in the first 12 months. By 2022 the factory is expected to employ 2,000 full-time employees and manufacture up to 130,000 vehicles annually.

The Lucid Air is priced from $52,500 after federal tax credits. The base Lucid Air will feature a 400-horsepower motor, rear-wheel drive, and a 240-mile range.  Deliveries will begin in 2019. Customers can pre-order the Air at https://lucidmotors.com/car/reserve.

In preparation for production, Lucid Air Alpha prototypes are undergoing a rigorous development program. Lucid has designated one of these test prototypes as a high-performance test vehicle and has installed a roll-cage for safety purposes. The Alpha Speed Car will be used for evaluating at-the-limit performance.

For the Alpha Speed Car's first testing session, Lucid headed to TRC Ohio to use their 7.5-mile oval to evaluate high-speed behaviors, including vehicle stability and powertrain thermal management. The test, software-limited to 217mph (350km/h), was successful in demonstrating the capabilities of the car and in finding areas for improvement that could not be properly evaluated in static bench tests.

Real-world tests are an important part of the engineering process, allowing the team to correlate computer simulation models with real-world performance. The collected data will now be used to finesse thermal and aero computer simulations and to make further performance improvements that will be tested later this year at higher speeds.

A video of the test can be seen at https://youtu.be/7k03MH7ztUs.

The Lucid Air will compete with the best vehicles in the biggest markets around the world. In at least one of these markets, there is an expectation of high-speed cruising that Lucid intends to satisfy.

The company also notes that high-speed capability does not compromise the mission to develop a highly efficient vehicle. On the contrary, the focus on maximizing range provides the high power and aerodynamic efficiency that enables higher speeds.

A larger battery, capable of storing large quantities of energy, can release energy at a greater rate. In addition, a larger electric motor is proven to be more efficient than a smaller motor. The result is a wonderful blend of maximum efficiency when needed and blistering performance when desired.

Contrast the Lucid Air with a high-performance fossil-fuel car that becomes less fuel efficient as the power demands increase, regardless of how the car is being driven. For example, the Ferrari LaFerrari, even as a hybrid, has an EPA-certified combined city/highway consumption rating of 14 miles per gallon. The Lucid Air is expected to receive a miles per gallon equivalent (MPGe) rating exceeding 100 miles per gallon.

The testing program continues for the Alpha Speed Car and the rest of the Lucid Air alpha fleet. The company will provide more details as these tests progress.

Lucid Motors will have the Lucid Air on display during of the New York International Auto Show, taking place at the Jacob Javits Center, April 14-23. The Lucid display is located in the Crystal Palace.

Lucid Motors is a luxury mobility company that is reimagining what a car can be. The company is applying innovative engineering, design, and technology to define a new class of premium electric vehicle. Headquartered in Menlo Park, California, in the heart of Silicon Valley, the Lucid team brings deep expertise from the automotive and technology industries. Learn more at lucidmotors.com.