In addition to the dark trim, these models come with blind spot assist, front and rear parking sensors, and remote start.

Maserati is darkening the halls of the New York Auto Show with the limited edition Ghibli Nerissimo Edition. According to the company, the Italian word comes the language’s expression for “extremely black.” Just 450 total units of these shadowy sedans are available for buyers in the United States and Canada.

The Nerissimo Edition will include black trim for the door handles, window trim, and grille. It’ll also include a set of 20-inch black wheels. Red brake calipers will break up the monochromatic exterior appearance. Maserati doesn’t limit the body color choices, but a dark shade seems like the natural choice for accentuating the upgrades. 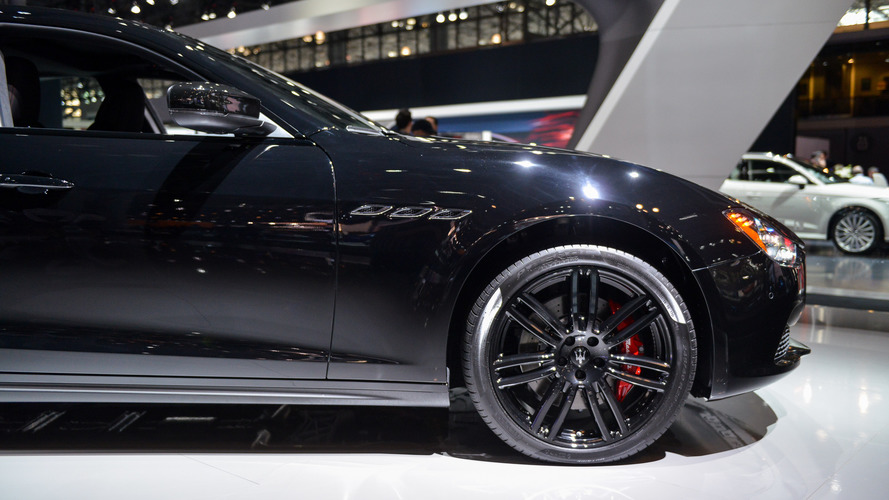 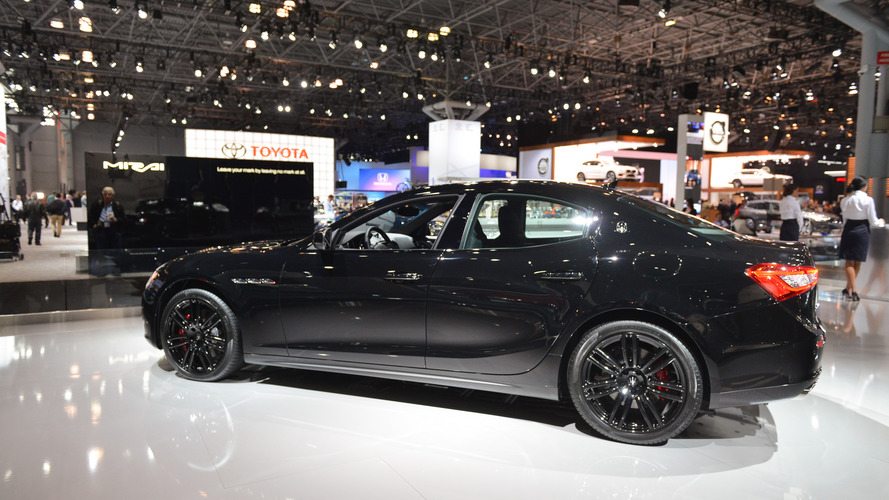 The cabin is similarly dark, including extended black leather with red stitching on the sport seats and steering wheel. A special badge indicates to passengers this Ghibli is part of a limited run of 450 vehicles.

All Nerissimo Edition models will come with standard blind spot assist, front and rear parking sensors, and remote start. Examples in the Ghibli S and S Q4 trims will also have a Harman Kardon stereo.

If interested customers aren’t able to get a Nerissimo Edition, they can at least look forward to a styling refresh for the Ghibli in the near future. Spy photos show the updated model with camouflage over the headlights, front fascia, and rear bumper. The photographs don’t reveal the interior, but automakers commonly decide to introduce new upholstery and trim during a model update. A powertrain update is possible for the 404-hp tune of the 3.0-liter biturbo V6, but don’t expect tweaks for the 350-hp tune after a 20-hp bump in output last year.

April 12, 2017 (Englewood Cliffs, NJ) – Maserati North America has chosen the background of New York City to unveil a new special Ghibli model, the Nerissimo Edition, of which only 450 will be produced strictly for the United States and Canada. The debut of the Ghibli Nerissimo at the New York International Auto Show will showcase an edgier vehicle with a deep black palette. The name Nerissimo is based on the Italian expression for “extremely black.” The Nerissimo will be unveiled for the first time at the Javits Center during the auto show.

Each Nerissimo vehicle will have a badge located on the center console highlighting the fact that it is one of only 450 total produced.

For 2017 the Maserati Ghibli takes a further step towards satisfying individual taste with the introduction of two new packages, Luxury and Sport, enhancing the standard features of every Maserati. The packages are designed to appeal to customers with differing tastes.

The Ghibli S Q4 Nerissimo on display in New York delivers 404 horsepower and the handling agility of Maserati’s Q4 intelligent all-wheel drive, gripping the road for maximum performance. It accelerates from 0-60 mph in 4.7 seconds, reaching a top speed of 176 mph.

Additional new and varied offerings on display at the New York International Auto Show include two S versions of the Modena-based company’s first SUV, the Levante, one of which features the exclusive Ermenegildo Zegna Edition interior, as well as the Quattroporte S Q4 GranSport and GranTurismo Sport Special Edition.

The Levante, Maserati's first SUV in its more than 102-year history, has distinctive Italian style and breathtaking design features. It continues to impress by showcasing Maserati’s key characteristics of design, exclusivity and performance.

Engine-wise, the Levante is equipped with the latest evolution of the Maserati 3.0-liter V6 engine. The two versions of the Twin-Turbo engine are acclaimed for their unique Maserati signature sound and for their exceptional performance.

The Maserati V6 engine with twin turbochargers is available in two versions with different horsepower: the top of the range, Levante S, delivers 424 horsepower and the exciting Levante delivers 345 horsepower. The most powerful Levante sprints to 60 mph in 5.0 seconds and has a top speed of 164 mph, while the figures for the 345 horsepower version are 5.8 seconds and 156 mph, respectively.

The technology applied to every Levante is designed to offer outstanding dynamic performance both on- and off-road; sophisticated suspension - double-wishbone on the front axle and multi-link on the rear, combined with electronically controlled damping, four corner air-springs providing 5 dynamic ride levels (plus one additional park-position), play an essential role in the car's handling.

Two Levante vehicles are featured on the show stand in New York, a sport version and a luxury version, the latter of which is epitomized by the black Ermenegildo Zegna Edition interior, featuring a patented silk fabric, unique in the industry, on the seats, doors, headliner and sun visors; the seat tailoring details and the label behind the sun visors highlight the exclusivity of the Zegna interior.

The Levante is currently available in U.S. dealerships with a starting price of $72,600 for the 345 horsepower Levante and $83,800 for the 424-horsepower Levante S model. The two Levante S vehicles on display at the Javits Center feature the stunning colors of Blu Emozione and Bianco Alpi.

After three and a half years of unprecedented success in international markets, the Quattroporte has undergone a substantial restyling to accentuate its elegance without altering its signature Maserati personality. With the restyling of the flagship Quattroporte, Maserati has launched a new range strategy to offer its highly demanding clientele the additional choice of two unique trim options emphasizing the two key pillars of the brand’s DNA: GranLusso and GranSport.

The vehicle on display in New York, the Quattroporte S Q4 GranSport, features the GranSport trim, underscoring the sporty character of the Quattroporte while enhancing the aggressive appearance of the car. Thanks to new exterior design cues and interior content that reflect the legendary racing heritage of the Maserati brand.

On the front of the Quattroporte GranSport, the dedicated restyling for the center and side air intakes improves the cooling function while showcasing an aggressive front area. The lower fascia is linked to the grille with aerodynamic inspired splits. The back is characterized by an evident composition between a center fuselage and two side pockets that focus the attention on the exhausts.

The Quattroporte is also available as a two-wheel-drive S version, as well as with a 523-horsepower V8 engine as the Quattroporte GTS, the latter of which has a top speed of 193 mph.

The interiors have also been reimagined. The new interior design revolves around Poltrona Frau leather or leather/Alcantara upholstery and new interior stitching available in four different combinations. Other distinguishing interior details are the door sills in carbon fiber featuring the Special Edition logo and the dedicated plate on the central tunnel with a carbon fiber holder, commemorating the anniversary and the limited production run of 400 units. Additionally, the front splitter, door handles, side mirrors and rear lip spoiler are designed in carbon fiber, with the paddle shifters, dashboard and door panels featuring carbon finish.

Both the GranTurismo and open-topped version have a 4.7-liter, 460-horsepower V8 engine. Top speed capability reaches 185 mph with a 0-60 mph time of 4.6 seconds.