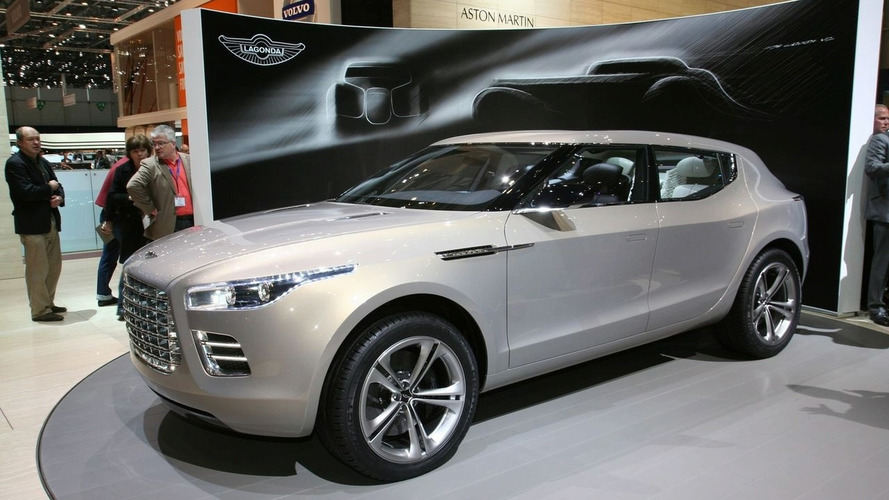 Aston Martin has officially revived the long dormant Lagonda nameplate by introducing a new concept to celebrate the brand's 100th anniversary. The Lagonda Concept is four-wheel drive vehicle with a bold exterior design that blurs the line between car and crossover.

According to the company, the concept draws inspiration from past Lagonda models as well as modern speedboat design but the end result appears to have little in common with either. The front is dominated by a wide grille with horizontal bars, large air intakes, swept-back headlights, and blackened A-pillars which helps to give the windscreen a wraparound appearance. In profile the concept features a miniature version of Aston Martin's front fender vents, a slopping roofline, an upward-sweeping rear passenger window, flush mounted door handles, and massive 22" wheels. Perhaps the most controversial angle is the concept's rear, as it has a small rear window and a large raised trunk which appears as if it were lifted straight off a Bentley Continental Flying Spur.

Although no interior pictures were released, the company says the cabin features spacious individual seating for four and is designed to provide occupants with a rich environment that leaves them feeling relaxed and comfortable.

Power for the concept comes from a V12 engine with an unspecified engine output, but of more important news is the fact that Lagonda will explore the use of flex-fuel, diesel, and hybrid powertrains for future production models.

According to Aston Martin, the Lagonda brand will eventually have a strong presence in 100 global markets with a large emphasis going towards emerging markets such as the Middle East, South America, India and China. According to Aston Martin Lagonda Chief Executive, Dr Ulrich Bez, "An Aston Martin is an authentic, pure sports car, but Lagonda is something else, a new brand that will reach into new markets. Lagonda will create a new kind of customer relationship, instilling the spirit of travel, adventure and style into a single, formidable package."