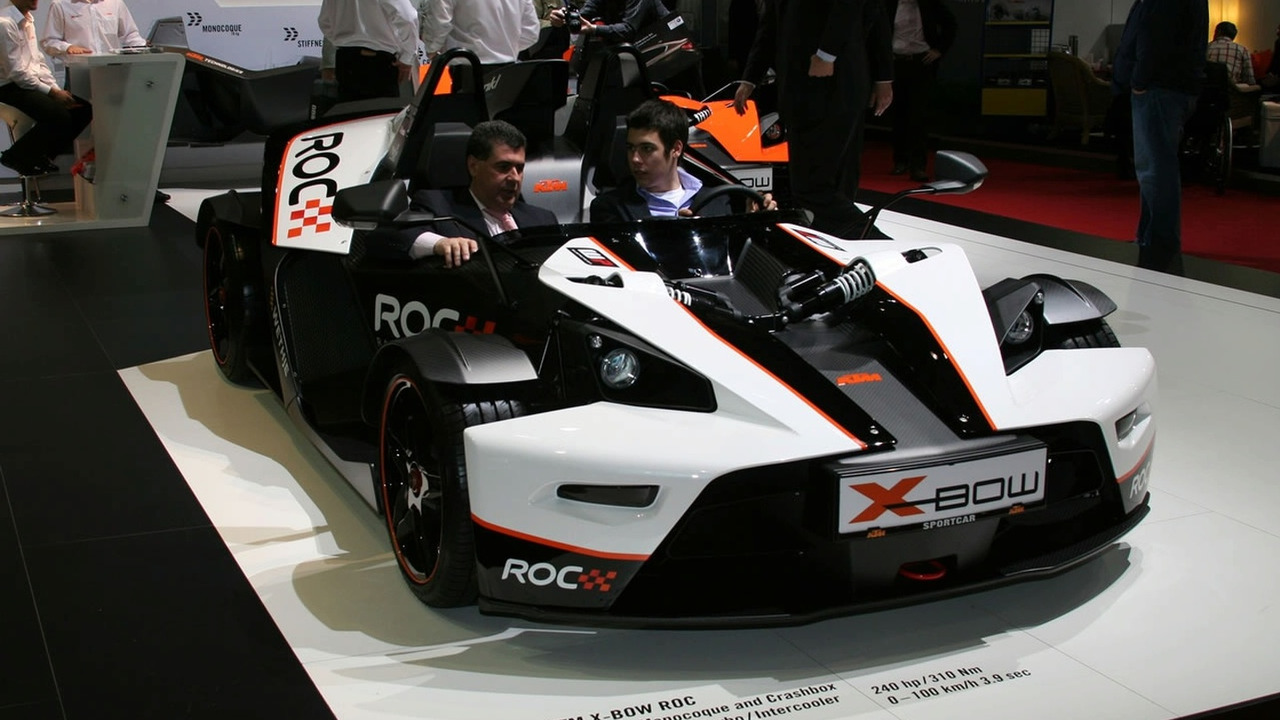 KTM debut two new models in Geneva for their X-BOW: the Superlight and an ROC 'Race of Champions' limited edition. The launch coincides with the firm's first year anniversary, one year since the production version X-BOW hit Geneva.

KTM, the makers that transformed radical prototype to radical production vehicle in just two and a half years, are back at Geneva to celebrate one year since their production X-Bow premiered. Launched in the Spring of last year at Geneva, the X-Bow is on the stands in five variants, two that make their world debut: the KTM X-BOW Superlight and X-BOW ROC.

The Austrian motorbike manufacturer's revised strategy for 2009 was announced with revised projected production figures down to 600 units from 1,000 alongside an alterered X-BOW line-up.

Building on the lightweight credential's of the X-BOW's carbon fibre chassis architecture, the material of which until now reserved for aerospace and Formula 1, the X-BOW Superlight will flaunt its motorsport-derived technology for all to see. And that means the application of black body panels and wheel covers of visible carbon fibre giving the Superlight a distinctive 'technoid' look. A carbon crash box and inboard pushrod suspension are additionally mounted to the monocoque.

At 79,980 euros (plus national taxes and import duties), the Superlight is the range-topping KTM X-BOW and comes complete with limited-slip differential, lightweight lacquered alloys with a single central wheel nut and all-important lap timer.

The X-BOW ROC gives a nod to the legendary 'Race of Champions' event, last year held at London's Wembley Stadium, where thousands of motorsports fans cheered on drivers at the wheel of different vehicles and names including Michael Schumacher, Sebastien Loeb, Tom Kristensen and Matthias Ekström. This was the KTM X-BOW's first appearance.

With praise from world-renowned drivers, it was obvious to the team that a limited edition model was necessary. And so enters the X-BOW 'Race of Champions', or ROC for short. Set for a run of just 30, the ROC features an exclusive body panel design, paintwork, specially painted lightweight alloy wheels, sports exhaust and removable multi-function steering wheel. And this for 69,980 euros.

As well as stepping down production to 600 units in the current economic climate, KTM will be focusing customer attention to their range of special PowerParts and PowerWear products as well as participating in the X-BOW Trophy and the RaceOrange program.