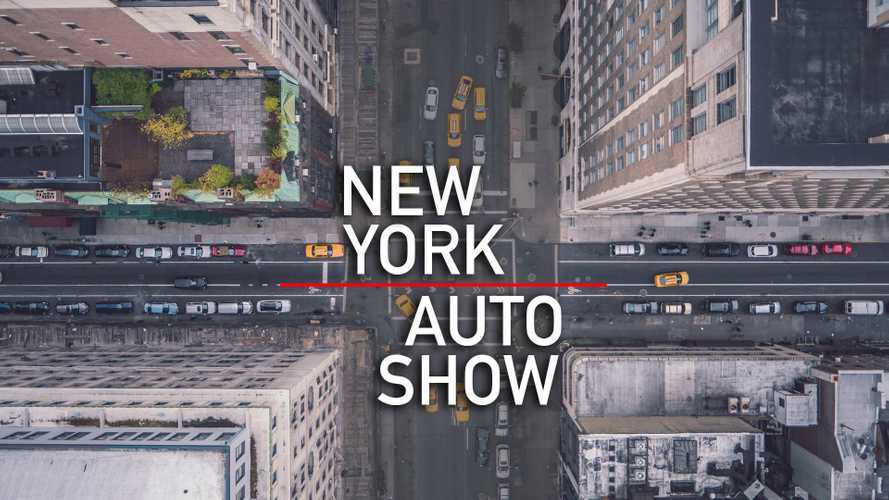 Here's the full rundown of what we're looking forward to seeing in New York this week.

Considering its proximity to the Geneva Motor Show, the New York expo tends to be a big show for North American debuts. For example, Geneva favorites like the Land Rover Velar and Porsche Panamera Sport Turismo will get a second unveiling here in New York, but they’ll still make a big splash with the American attendees. Now, don’t think for a minute that there won’t be a whole lot more to talk about in New York this week. In fact, this ought to be a hell of a good show.

Here’s everything we’re expecting to see in the Big Apple this week.

Acura’s midsize TLX will get a healthy refresh in New York, previewed here with a teaser image. The biggest change appears to be the redesigned front end, with lots of cues taken directly from the Acura Precision Concept. Earlier spy shots showed a prototype TLX completely uncovered, and honestly, it looks nice. It’s unclear if the 2.4- and 3.5-liter engines will be updated, though we expect a number of tech upgrades to be found inside the cabin.

Audi Sport is the name of the German automaker’s performance sub-brand. Audi will properly kick off the Sport line’s launch in the U.S. by showing a few new products, including a couple we’ve already seen (and driven). Look for the sexy new TT RS and crazy-good RS3 sedan to bow in New York. Of course, we won’t rule out the possibility of another surprise or two...

General Motors gave us an early preview of the new Regal models in Michigan last week. No longer a midsize sedan, the Regal will launch later this year in Sportback and TourX (read: wagon) body styles, with turbocharged power, and eight- and nine-speed automatic transmissions. In New York, Buick will take the wraps off its new seven-passenger Enclave crossover. What’s more, the Enclave will be the first car to launch under the company’s new Avenir sub-brand – we’re expecting luxurious things.

If you hadn't already guessed by the many, many teasers that Dodge has been releasing over the past few weeks, the new Challenger SRT Demon will make its debut at the New York Auto Show. We know it will be fast and we know it will be built specifically to tackle quarter miles, but things like horsepower and final design details are mostly still under wraps until New York.

The Genesis brand originally launched in New York a decade ago; this is always an important show for Hyundai Motor’s luxury division. We’re expecting a new concept to debut this week, and our best guess is that it’s something to preview the new G70 sedan, seen testing here. That said, we know Genesis has a few SUVs in the works, too, so don’t be surprised if this week’s concept has a slightly more upright shape.

The new Civic Si coupe and sedan will make their dual debut at the New York Auto Show next week, and we already know that they'll both come with 205 horsepower and 192 pound-feet of torque. Alongside the Civic Si, Honda will have a new Clarity EV and Clarity Plug-In, joining the fuel cell model we recently tested, to add some much needed efficiency to the stand.

Hyundai confirmed its plans to bring an updated Sonata to New York, and we’ve already seen the new car by way of the Korean-spec model. Changes for the U.S. market are similar, with more dramatic sculpting around the front fascia, and a cleaner rear end. The interior will get a number of small updates, as well. It’s unclear if powertrains will be changed, but we expect the naturally aspirated, turbocharged, hybrid, and plug-in hybrid versions to all carry over.

Infiniti’s big, bold new QX80 Monograph will have a “huge” unveiling at the New York Auto Show when doors open later in the week. A lone teaser image, pictured above, gives us our best look at the upcoming SUV, while its Nissan Armada/Patrol bones point to the possibility of an updated 5.6-liter V8 under the hood with well over the current 400 hp on tap.

The gorgeous and lovely Jaguar F-Type gets a couple of updates for the 2018 model year, none of which should ruin the fantastic package. Visually, the new car is only ever so slightly different than its predecessor, and we’re told powertrains will carry over unchanged. There are rumors a new four-cylinder option could join the F-Type lineup, giving the car an even lower base price, and Jaguar says it’ll release a limited-edition 400 Sport model, with the output of its supercharged V6 bumped up to an even 400 hp.

Grand Cherokee Hellcat! It exists, all 707-hp of it. The all-important horsepower number matches that of its Charger and Challenger kin, though torque output is only 645 lb-ft here – a 5-lb-ft reduction. Not that we’re complaining. This thing has all-wheel drive, and will reportedly sprint to 60 miles per hour in 3.5 seconds, making it the quickest SUV ever. We bet it sounds completely insane, too.

If you thought the Stinger was exciting, wait until you see the new Kia Rio! Okay, exaggeration aside, Kia’s smallest offering will get a much-needed makeover at the New York Auto Show in line with the rest of the lineup. We haven’t seen so much as a teaser leading up to its debut, but we should know more closer to the tiny hatchback’s unveiling.

Land Rover’s sleek new Velar made a big splash when it debuted at the Geneva Motor Show last month, and it’s expected to be a similar success in New York this week. We love the way this thing looks – incredibly stylish, and you’d never know it was based on the Jaguar F-Pace. The new Velar arrives at U.S. dealers this summer, with a turbocharged four-cylinder engine, supercharged 3.0-liter V6, and even a 2.0-liter diesel four.

Following the debuts of the surprisingly stunning LS 500 at the Detroit Auto Show earlier in the year, and the hybrid LS 500h in Geneva, Lexus is giving its newest luxury sedan the sporty treatment in New York. Already we’ve seen a lone teaser to show the aggressive new cues courtesy of Lexus’ F performance department. The LS F Sport will capitalize on the GA-L platform’s “responsively and agility” with more aggressive characters. Don’t expect a power bump, though.

The Ford Motor Company has been pretty mum about its intentions for the New York show, but we’re expecting a big debut from Lincoln. Remember, this is where Lincoln chose to debut the Continental, and this is where the crazy Navigator concept with its unfolding staircase and gullwing doors originally debuted. So for this year, we’re expecting the production Navigator to bow. Here’s hoping it’s more than just a new Expedition with a different front fascia.

When is an SUV as quick as a Mercedes-AMG GT? When it’s the Mercedes-AMG GLC63. This is such a cool package. We love the shape and size of the GLC crossover, and can only imagine it’s going to be completely nuts with Mercedes’ 4.0-liter biturbo V8 shoehorned under the hood. Mercedes will show both GLC63 and GLC63 Coupe variants in New York. That’s not all, of course – we know Mercedes will bring some kind of concept to the Big Apple, though it’s unclear what it previews. We’re thinking something along the lines of an autonomous sedan, but that’s just our best guess.

Check your rearview mirror, Nissan will show its outrageous GT-R Pursuit police car when doors open to the New York Auto Show later in the week. Far less dramatic – but nonetheless interesting – will also be the GT-R Track Edition, which gets a chassis tun courtesy of Nismo, and a 370Z Heritage Edition, which heralds back to the glory days of the iconic 240Z.

Both of Porsche's big New York debuts will be carryovers from Geneva – not that we're complaining. Porsche stunned the world when it finally showed the wagon-shaped Panamera Sport Turismo. Oh, and let's not forget about that incredible 911 GT3, too. We fully expect both to captivate show-goers in New York as much as they did in Geneva.

The Subaru Legacy received a number of thoughtful upgrades earlier this year, and now its high-riding, longroof Outback counterpart is getting the same tweaks. The new Outback looks a little more butch, and has nicer materials inside. Powertrains carry over unchanged, though Subaru notes a revised CVT should make the Outback a bit better to drive. Elsewhere on the Subaru stand, we’ll see the U.S.-spec version of the new Crosstrek, which Subaru already debuted in XV form at last month’s Geneva show.

Gone is the FJ Cruiser, but in its place could come the Toyota FT-4X concept… if we’re lucky. Though we don’t know all the details on this unique-looking concept yet, Toyota promises that it will be capable both on and off road, and the “Future Toyota” designation hints that it might be coming to production sometime in the near future.

The new Volvo XC60 made its debut earlier in the year at the Geneva Motor Show – but that doesn’t mean the Swedes can’t still celebrate its debut in New York. The company will honor 90 years since its first car in the U.S. at the New York Auto Show. Along with an all-new design, the XC60 also comes with as much as 400 horsepower on tap.

--
Steven Ewing and Jeff Perez contributed to this story.