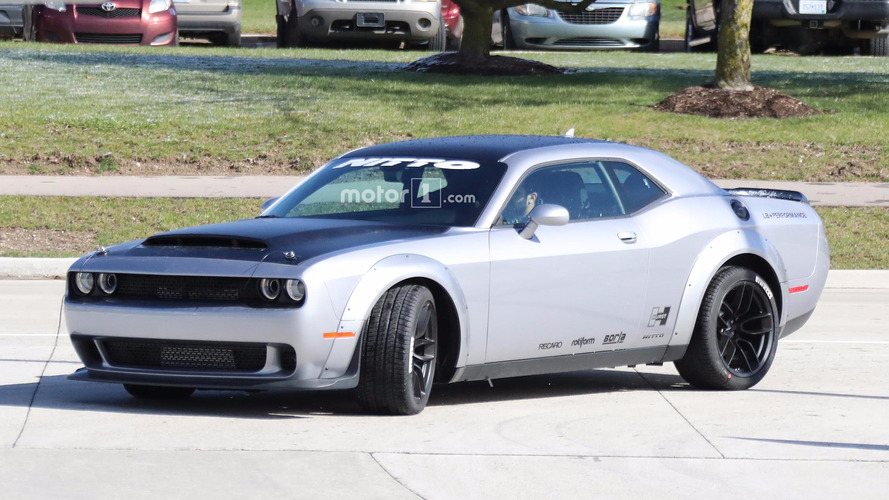 The stickers on the body might be a method of hiding this muscle car's true identity without resorting to the usual camouflage.

The Dodge Challenger SRT Demon finally ends its interminable teaser campaign on April 11 by debuting at the New York Auto Show, but these spy shots offer a nice preview before the official unveiling.

It appears that Dodge is taking a unique approach for testing the Challenger Demon on public roads. Rather than dressing it up in camouflage that grabs attention, the company decorates the body in decals from aftermarket firms like Hurst and Borla. Many people seeing this on the road would just think it’s a tuned Challenger, not the new Demon.

We have actually spotted this car before – or at least one of its identical siblings. Spy photos in late February showed the Challenger Demon under development both with and without the stickers on the body. One especially odd thing about all of these vehicles is that they’re using Pirelli tires whereas Dodge says that its new muscle car comes standard with 315/40R18 Nitto NT05R drag radials.

A supercharged V8 rumbles underneath the Challenger Demon’s massive hood scoop, but the mills output remains a mystery. Dodge’s teasers seem to point towards an output of 757 horsepower – a 50-hp upgrade over the existing 6.2-liter Hellcat. After touting the Demon’s heavy-duty parts for so long and giving buyers a button for running the coupe on 100-octane racing fuel, such a relatively minor boost in output seems a little underwhelming, though.

Dodge is packing the Demon with as much racing tech as possible for making sure it’s the king of the drag strip upon introduction. For example, the beastly muscle car does things like using the air conditioner for cooling the charge of air in the supercharger. The coupe can also accelerate hard off the line with heavy-duty components that take the punishment of a highly sophisticated launch mode.

To justify its multi-month teaser campaign worthwhile, the Challenger Demon needs to be the meanest machine at the New York Auto Show, but it has competition. Fellow FCA brand Jeep is bringing the Hellcat-powered version of the Grand Cherokee, and Mercedes-Benz has the GLC 63 S Coupe. Plus, there could be even more surprises there. Motor1 has a team attending the event in the Big Apple so watch here for full coverage of the debuts.