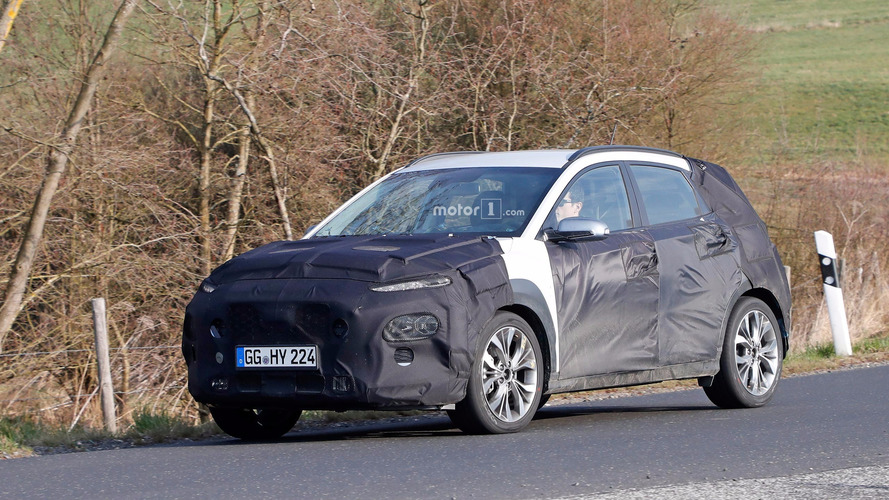 Hyundai tries to keep the Kona under wraps, but the camo can't hide everything.

We now know that Hyundai’s upcoming compact crossover with quirky looks goes by the name Kona, and a new batch of spy shots reveal the little model surfing the roads of Europe. The vehicle should get a full debut sometime this summer, possibly at the Frankfurt Motor Show in September, but these shots offer an early preview of its trendy appearance.

The camouflage and fake panels that Hyundai’s engineers drape over the Kona does a superb job of hiding the major styling elements, but we can still some insights into its design. Two-tier headlights, akin to the current Jeep Cherokee, are the major feature in front. A skinny strip of LEDs sits just below the hood, and larger lamps are lower that flank the broad grille. In profile, the additional cladding doesn’t do a good job of hiding the Kona’s downward sweeping roofline, which should give the little CUV a svelte appearance. The final taillights appear to be on the back, and their skinny horizontal shape should accentuate the rump’s width.

The Kona’s cabin doesn’t appear to share the exterior’s funky appearance, but this spy shot still depicts a pre-production vehicle so things can change. The center stack features the infotainment screen at the very top of the layout. The general quality of the materials look nice, but so much black material could get a little monotonous. Hyundai should add more light-colored trim for something to catch the eye.

The Kona reportedly shares its platform with the i20 from Europe, and the little CUVs powertrain range is a mystery – small-displacement turbocharged mills seem most likely, though. We also don’t yet know whether the Kona would be available with all-wheel drive or if powering the front wheels would be the only option. In Europe, the company could get away with FWD only because buyers accept it in the tiny crossover segment, but in the United States, similar products like the Mazda CX-3, Chevrolet Trax, and Honda HR-V have AWD on their option lists.

The Kona also has a sibling on the way because Kia is building a small crossover on the same platform. It features a more conventional looking front end but a similar appearance in profile. The company reportedly plans to call the CUV the Stonic.