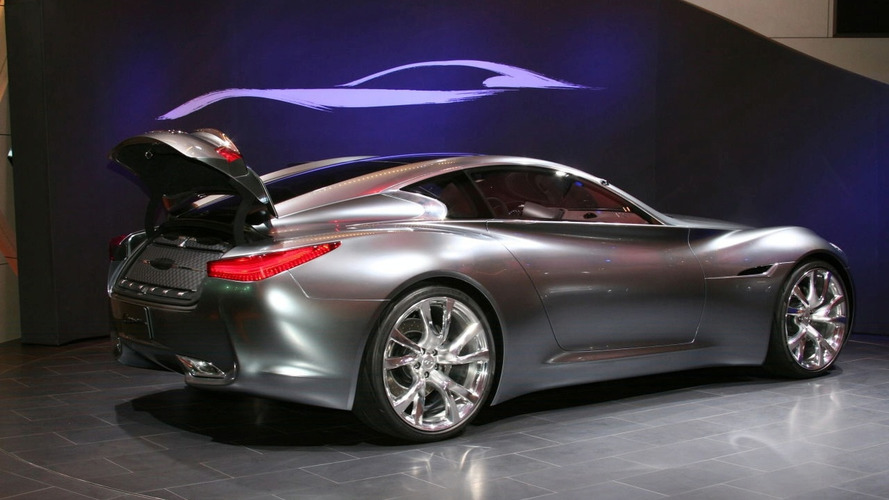 Infinti are showing their essence at Geneva, bringing all that defines the brand's past and will define its future into a concept car designed for the luxury super-coupe market.

L'eau d'Infiniti. A brand personification; Infiniti's 'Essence' in concept form. Presented this week at the Geneva Motor Show, the Essence showcases Infiniti's core values for the future and a compact celebration of the brand's past. Heralding a future of Infiniti's 'Inspired Performance' into the luxury super-coupe market for the first time, the Essence aims at re-establishing Infiniti at the heart of the world's most vibrant brands and positioning it towards the most exclusive.

With a first for Infiniti, the Essence provides the company's first motor show preview of their petrol/electric hybrid powertrain. Dubbed appropriately as 'responsibly powerful', the combination of 3.7-litre twin-turbo V6 engine and the firm's new 3D electric motor feed a mighty 600 PS to a rear-wheel-drive setup. An equally mighty 160 PS being chanelled from the electric motor, the technology works on optimisations to the layout of the electromagnetic coils and permanent magnets - decreasing the lithium-ion battery's size and increasing output.

But the concept's essence requires further investigation. Turning to the design, the Essence is not about showing signs of wealth or success, says Shiro Nakamura, Senior Vice President of Design. It's a 'driver's car', but not an 'aggressive sports car'. Infiniti's "Dynamic Adeyaka" is said to inspire design from both the human and natural worlds, bringing a new classical and dynamic shape to the brand not experimented with in Infiniti's 20-year history.

The Essence is as much a driver's car in the cabin - while the cabin is as much a passenger's car. Two seperate 'cocoons' - the driver's side themed black and the passenger's side themed 'earthy red' - dominate the interior's design. But designers claim the real magic is the 'hidden tech' - allowing minimalism in place of controls and information overload. An exclusive range of luggage specifically designed for the concept car by Louis Vuitton harks back to the partnerships first made with coachbuilders in 1908.

Coinciding not only with the brand's 20-year anniversary as a platform for the three pillars of Infiniti (driving pleasure, hospitality and peace of mind), the Essence takes Infiniti forward with their current challenge: introduction into the European market.