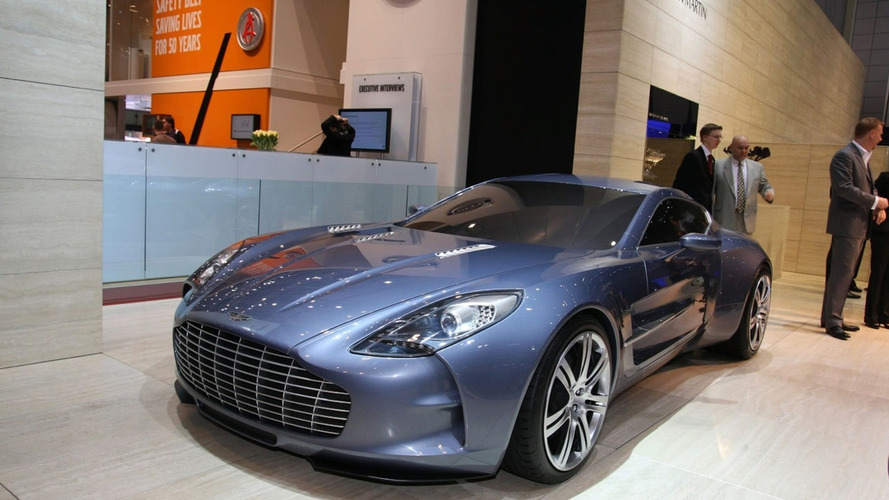 This is Aston Martin's latest car, the Aston Martin One-77. This beautiful car will be reduced to a blur when the driver utilizes all 700 bhp from the 7.3-liter V12.

Aston Martin is pulling the cover off the new Aston Martin One-77 in Geneva. The first in a 77-unit limited edition will be on display throughout the entire auto show there.

"It had to combine high-technology with hand-built craftsmanship, and demonstrate the unique capabilities and passion of our designers, engineers and technical partners," said Aston CEO Dr. Ulrch Bez. That is a main reason why the car makes use of hand-rolled aluminum paneling, and why each is tuned by hand.

"Quite simply it had to be the ultimate expression of Aston Martin. As you can now see, we have achieved that goal in magnificent style."

Based on ideas seen in the racecars on the DTM race circuit, the One-77 has a carbon fiber monocoque that is as strong as it is lightweight. It has inboard double wishbone suspension "at each corner," to reduce unsprung weight. The cars take advantage of Dynamic Suspension Spool Valve damping, which the company claims is a first for a street car. The dampers are fully adjustable, even while they're still on the car. Suspension is tuned by hand by the engineers at A.M.

A street car needs serious power to even require such a suspension system. Aston did not short the One-77 in that department. Rumor had it that this car would get 600 hp, and have a 0-100km/h time of about four seconds. Well, the One-77 is even more powerful than that. It comes with a 7.3-liter naturally aspirated V12 engine that produces over 700 bhp. Unfortunately, final power, torque, acceleration, and speed ratings are not yet available. The engine was mounted 100mm lower than any other V12 Aston, thanks to the use of a dry-sump. The company says this helps keep the car's center of gravity low.

Engine manufacturer Cosworth helped Aston Martin adapt their 6.0-liter V12, currently seen on the V12 Vantage, DBS, and DB9. The engine specialist worked to cut 25% of the V12 unit's mass, despite the larger displacement and increase in power. All that power goes through a new six-speed gearbox on its way to the rear wheels. The driver makes gear selections via paddles behind the steering wheel. The next-gen Aston transmission is a "robotised sequential manual" that could find its way on other vehicles from the company.

Final testing still needs to be conducted on the vehicle. Once completed, Aston believes they will announce a top speed of over 200mph, a 0-60mph time of 3.5 seconds, and a weight of around 1,500 kg. The Aston Martin One-77 will stick around the Geneva Motor Show through March.