Audi Q8 Is Spied Turning Laps At The Nurburgring 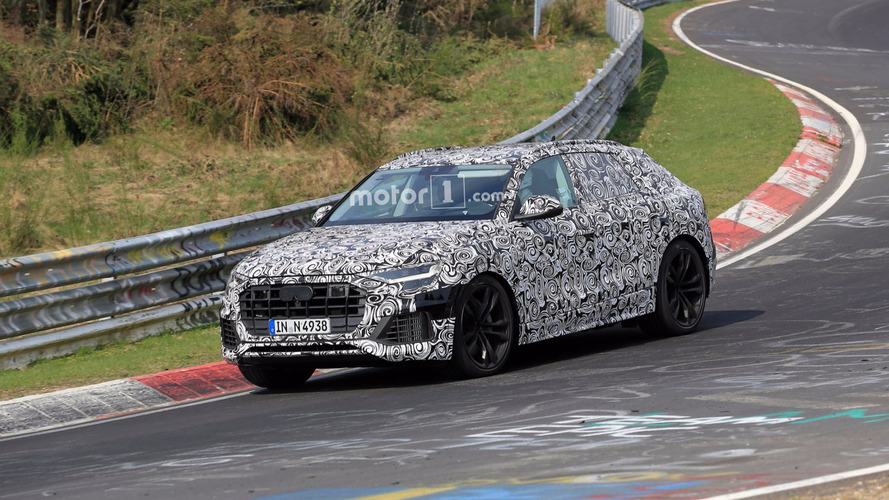 The flagship coupe-SUV is expected to go on sale next year.

Audi has shifted testing of its forthcoming Q8 coupe-SUV from snow to tarmac, as evidenced by these shots recently nabbed at the Nurburgring. The camouflage appears to be identical from earlier winter time photos, with the only noticeable change being the wheels and tires for obvious reasons. And though we can’t be entirely certain, this prototype appears to be ever-so-slightly lower to the ground. Perhaps we're seeing the legs of an RS version being stretched.

We’ve seen a couple Q8 concepts in recent months, starting with a bright blue Q8 in Detroit for the North American International Auto Show. Audi says the concept is “more luxurious than any Audi before,” featuring a blizzard of technology that includes a contact analogue head-up display, numerous integrated displays and more. Powering the concept is a plug-in hybrid arrangement featuring a 3.0-liter turbocharged gas engine with an electric motor, funneling power through an eight-speed automatic. All total, it makes 443 horsepower and is said to have an electric-only range of 37 miles.

Lending credance to our RS therory, a slightly more aggressive Q8 variant appeared at the Geneva Motor Show, showing a sporty design with widened wheel arches and greater use of black accents. It retained a mild hybrid powertrain but gained a few more ponies, delivering 476 horsepower which Audi says is good enough for sub five-second runs to 60 miles per hour. If the concept in Detroit foreshadows the standard production Q8, this one no doubt foreshadows a possible RS version.

In any case, the Q8 will be Audi’s first step into the large coupe-SUV segment where it will serve as a flagship people mover. It’s expected to reach showrooms in 2018, where it will likely be available with standard and hybrid configurations. Even behind all the camouflage its sweeping lines suggest it should be a quite a looker, targeted squarely at the BMW X6 and Mercedes GLE Coupe.