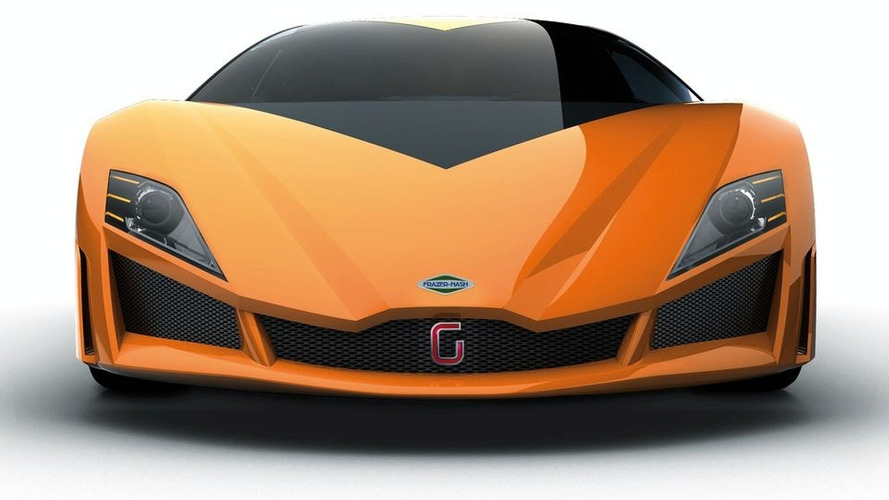 Giugiaro will present the Namir concept in Geneva. Developed in concert with Frazer-Nash, the car aims to be the world's fastest plug-in hybrid.

More details have surfaced regarding the high-performance hybrid Giugiaro plans to unveil at Geneva this week, and it turns out the "Frazer-Nash" name that was previously attached to the car is a misnomer. Though the existing Frazer-Nash company was involved in the design, the car will be called Namir, an Arabic word for "tiger."

If this exotic-looking two-seater's performance claims are valid, the moniker is more than appropriate. The Namir uses a mid-mounted gas-powered 814cc rotary engine coupled to four electric motors and lithium polymer power cells for supercar performance. The motors are mounted at the front and rear, on the suspension, and overall power is 270 kW. This translates to about 370 horses of instant-on performance from the electric motors. Giugiaro claims a top speed 300 km/h (187mph) and 0-100 km/h acceleration clocks in at 3.5 seconds, with 200 km/h coming up in 10.4. The plug-in hybrid drivetrain is reported to provide 39 km/liter fuel economy, and CO2 emissions under 60 grams per kilometer. With the 50-liter fuel tank, that gives the Namir a 2000-kilometer range. The car is already racking up performance credentials, with a 1'51" lap time around the Autodromo Nazionale in Monza.

An orange and black paint scheme goes nicely with the car's name, and the engine cooling vents at the rear suggest tiger stripes. The Namir's racing intentions are clear from the body's supercar shape. Carbon-fiber and aluminum body panels are used over an aluminum spaceframe to keep the weight down. The dramatic, massive windshield contains solar panels that provide power to air-condition the cabin, which has its own share of show-car comforts. Touch-screen monitors draw on Frazer-Nash's experience to provide a flexible infotainment system. Giugiaro has contributed unique styling features like a hexagonal steering wheel and a leather-and-tweed interior that's an "homage to British tradition."

Though it doesn't represent the triumphant resurrection of a classic badge, the Namir does have a strong connection to Frazer-Nash. The sports car company has gone through a number of incarnations since automobile production ceased in the 1950s, and these days Frazer-Nash Research Limited is a designer of plug-in hybrid systems. Frazer-Nash collaborated with Italdesign Giugiaro on the Namir and developed the car's high-performance drivetrain.