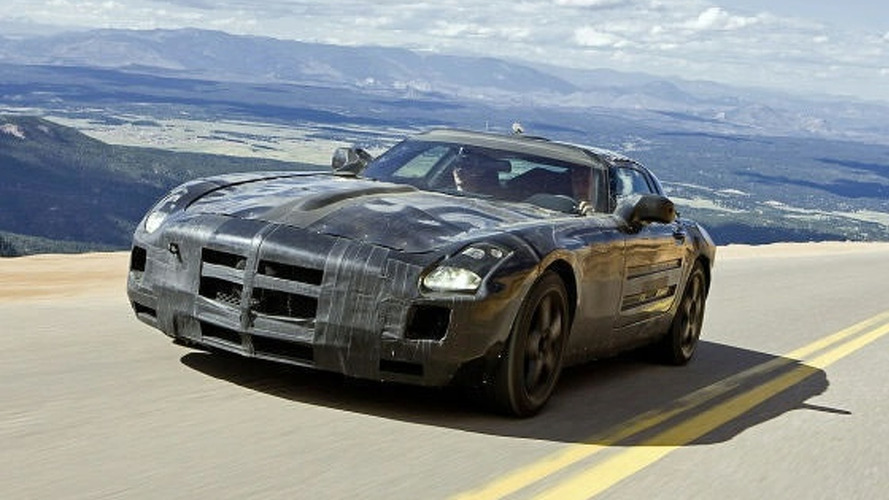 Mercedes confirmed its plans to go ahead with the gullwinged SLS AMG ultra-performance coupe, expected to arrive in the spring of 2010

The worldwide economy may be in the toilet, but that's not stopping Mercedes from getting ready to do battle with the Porsche 911, Aston Martin DB9 and Audi R8 V10. The gullwinged SLS (formerly identified as SLC) is on track for production, which is expected to begin in the spring of 2010.

Mercedes AMG CEO Volker Mornhinweg confirmed at a press conference that the SLS, which has been spotted as a heavily disguised prototype, is on the way. In addition to the gullwing doors, a Mercedes-exotic hallmark dating to the original 300SL, the SLS will feature a number of new features. Among them, are a rear-mounted seven-speed transaxle and dual clutch gearbox, to keep the long-nosed car's weight balanced. AMG's naturally-aspirated 6.3 liter V8, now featuring dry sump lubrication, routes 571 horsepower through this gearbox. An all-aluminum spaceframe keeps the SLS' weight to 1620kg. Zero to 100 km/h can be achieved in just 3.8 seconds, and zero to 200 km/h in less than 12. A speed limiter kicks in at 315 km/h (195 mph). Should the driver want to limit his or her speed before that, ceramic brakes are on hand to facilitate this.

Pricing hasn't been set, but as Mercedes intends to go head-to-head with the 911 and others, the SLS is expected to have an MSRP in the €140,000 range.