Why The FIA Is Lining Our Roads With Star Names 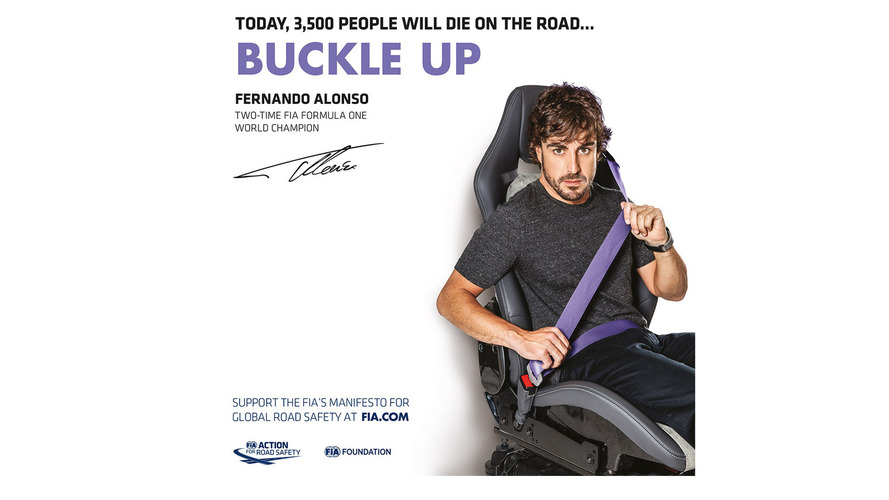 Thirteen famous names have joined the FIA in promoting the ‘Golden Rules for Safer Motoring’ in a new Action for Road Safety campaign. Kate Walker reports.

Stars of sport, stage, and screen have taken to the roads to promote the FIA’s latest road safety campaign. But don’t expect to see the likes of Fernando Alonso or Rafael Nadal thumbing a lift on a sidewalk near you – the #3500LIVES campaign will feature in global roadside advertising courtesy of campaign sponsors JCDecaux.

“Road traffic crashes are the cause of 1.25 million deaths and 50 million injuries every year,” said FIA President and UN Secretary General’s Special Envoy for Road Safety Jean Todt. “We cannot sit by and do nothing when faced with these figures. I am proud that the FIA and its member clubs are in the front line to meet this challenge and raise awareness about the importance of road safety.

“A lot can be achieved simply by respecting a few basic rules, such as those the FIA has been promoting for some time now. We want this campaign to reach as many people as possible around the world and to achieve that we have called on a number of leading celebrities who can help, thanks to their popularity and visibility. In addition, we asked for support from the leader in the field of roadside advertising, JCDecaux.”

Using fame to get the message across

Campaign ambassador and musician Pharrell Williams admits to having slipped up in the past, but says he was convinced to amend his behaviour by the shocking statistics relating to road and traffic incidents.

“We all drive and the last thing we want is to be involved in a road accident,” he said. “In the past, I too used to use my phone to send texts while I was driving, but then I realised, partly from seeing the statistics, just how dangerous that can be.

“As an artist I’m perfectly aware that my fame allows me to do something for a good cause and road safety is one of them.”

In addition to featuring on advertising hoardings around the world, the campaign’s ambassadors are expected to lead by example, following the golden rules for safer motoring in their private and public lives.

“Even if just one life is saved thanks to the example our ambassadors can set, then we can claim it has been a success,” Todt said.

By reminding people of the effect that simple behavioural changes can have on road traffic crashes, it is hoped to reduce the 1.25 million fatalities and 50 million injuries that take place on the world’s roads each year.

“A lot can be achieved through respecting basic rules,” Todt explained. “We want this campaign to reach as many people as possible around the world and, to achieve that, we have called on people who can help thanks to their popularity.”

The launch of the campaign follows Todt’s receipt of the United Nations Association of New York Humanitarian of the Year Award last October.

In accepting the award in recognition of his road safety efforts, the FIA President said: “Road injuries rank among the top ten leading cause of death around the world, comparable to HIV/AIDS, tuberculosis and malaria and should be treated with the same urgency as these pandemics.

“This is as important as a humanitarian emergency. And the numbers are getting worse as the world urbanises, motorises, and as there is more movement of people and goods.

“If no action is taken, road traffic injuries will be the chief cause of death globally by 2030.”