At the Detroit Auto Show back in January, Volkswagen announced the 2018 Atlas would begin from somewhere in the region of $30,000, and now VoA has confirmed the seven-seat SUV’s starting price. $30,500 MSRP will get you the entry-level Atlas S with the 2.0-liter TSI engine and a front-wheel-drive layout, but keep in mind it won’t be available right away.

Even the base model has a generous array of standard equipment, including LED headlights with LED daytime running lights, rearview camera, stainless steel roof rails, and 18-inch alloy wheels. On the inside, buyers are going to be rewarded with a 6.5-inch infotainment system packing Android Auto, Apple CarPlay, and MirrorLink integration, along with Bluetooth and USB connectivity. It also comes with cruise control and an audio system with six speakers. 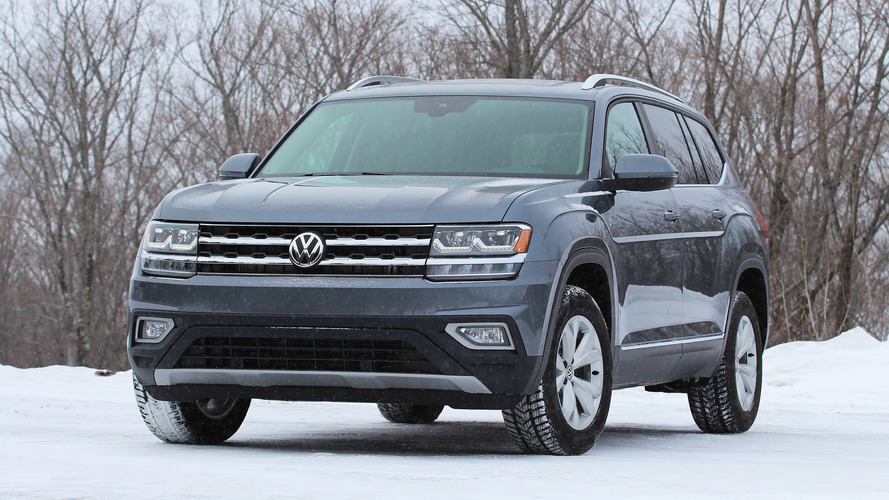 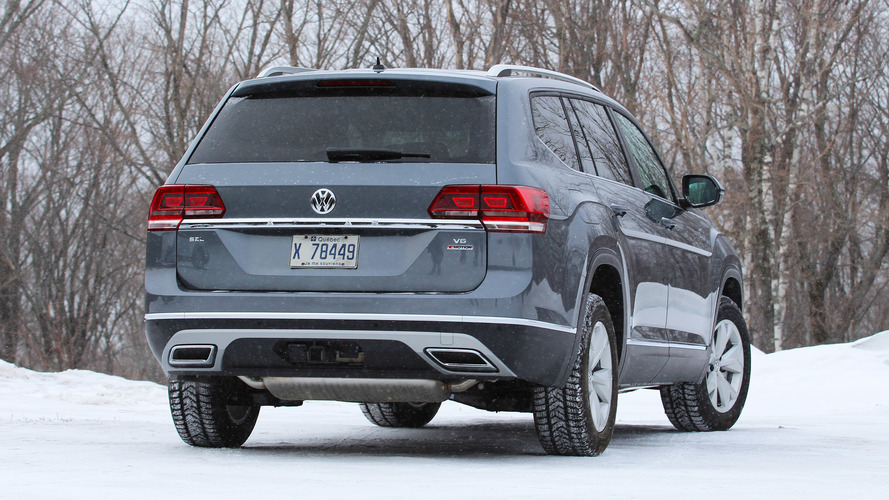 If you would rather fork out more money for a beefier engine, the 3.6-liter V6 for the base version begins at $31,900 for the FWD model and from $33,700 with the 4Motion AWD setup. Unlike the four-cylinder model, the V6 models are going to be available right away.

Up next is the limited-run V6-only Atlas S Launch from $33,500 with FWD and from $35,300 with AWD. It builds upon the S version and adds a panoramic sunroof, eight-inch touchscreen, footwell lighting, garage door opener, and SiriusXM satellite radio.

Next is the Atlas SE with Technology beginning from $35,690. Should you want the V6, that’ll be $37,090 or $38,890 once you tick on the AWD box. It features all of the SE’s goodies, plus Adaptive Cruise Control, Lane Departure Warning, Forward Collision Warning and Autonomous Emergency Braking with Pedestrian Monitoring (Front Assist), remote start, power liftgate, three-zone climate control, and an auto-dimming rearview mirror. 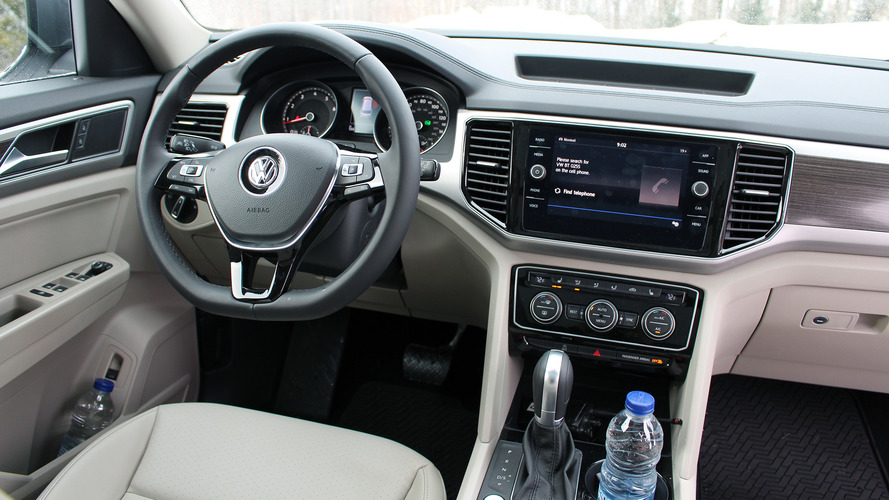 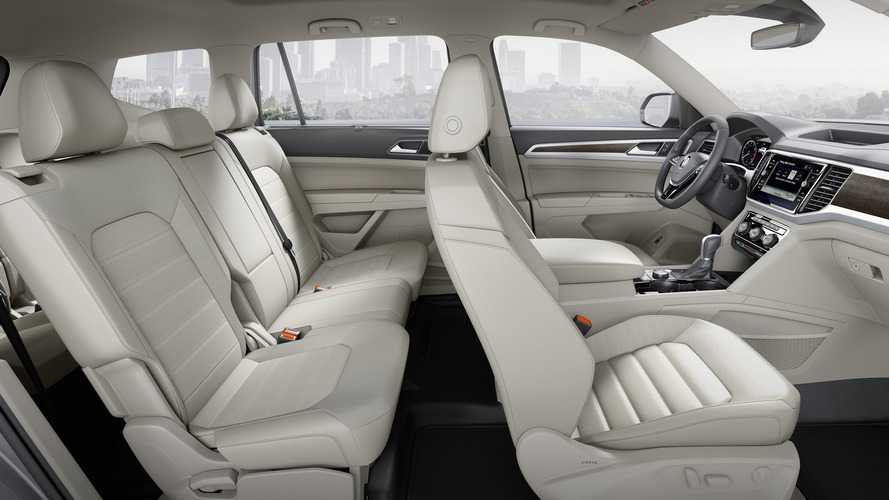 The higher-end Atlas SEL will set you back at least $39,160, but you can upgrade to the V6 FWD model from $40,890 or the V6 AWD beginning from $42,690. It starts off as an SE with Technology and brings a panoramic sunroof, Easy Open liftgate, 8-way passenger seat, memory driver’s seat and mirrors, power outlet for the second row, front & rear Park Distance Control, plus a tow hitch on the V6 models.

There are also some optional packages available, such as the $625 captain’s chairs replacing the second-row bench to turn the Atlas into a six seater. It will be available later on only on the SE, SE with Technology, SEL and SEL Premium models.

There’s also the sporty R-Line trim (late availability) introduced in Detroit and set to cost $1,960 on the SE and SEL versions.

As a reminder, the turbocharged 2.0-liter TSI is rated at 235 horsepower and 258 lb-ft of torque whereas the naturally aspirated 3.6-liter V6 churns 276 hp and 266 lb-ft. Both are linked to an eight-speed automatic gearbox, but only the six-cylinder can be blessed with AWD. 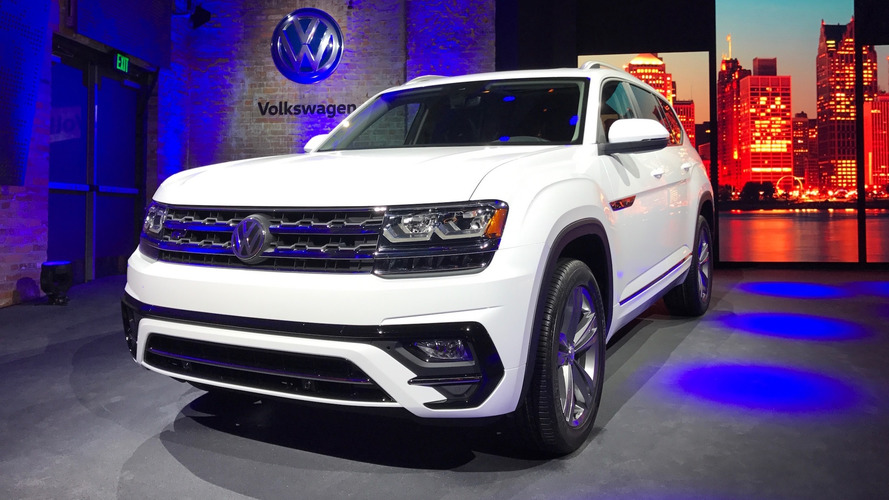 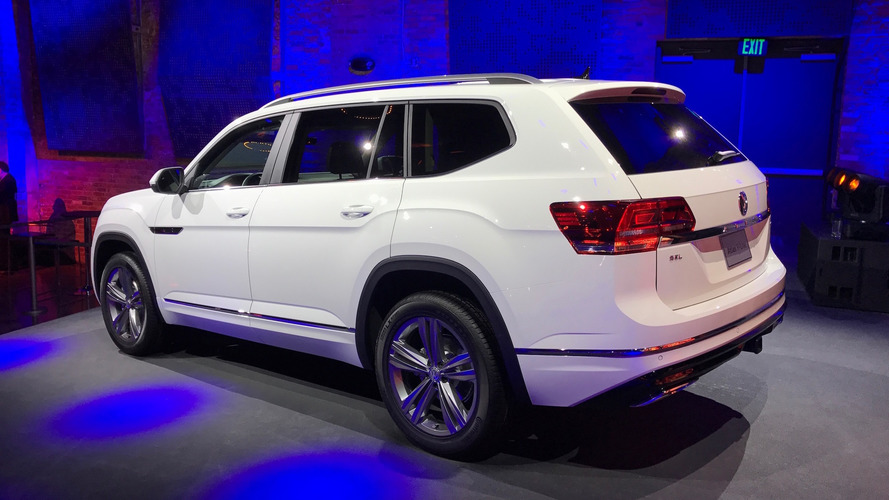 The MQB-based VW Atlas has been in production since late last year at the Chattanooga factory and will begin to reach dealerships next month.

HERNDON, VA (April 3, 2017) — Volkswagen of America, Inc., today announced pricing of the all-new, seven-passenger 2018 Atlas. With a starting Manufacturer Suggested Retail Price (MSRP) of $30,500 for the four-cylinder turbo 2.0L TSI® S FWD model (late availability), and $31,900 for the 3.6-liter V6 S FWD model, the Chattanooga-built SUV is loaded with standard equipment and available technology features. For maximum utility and comfort, the Atlas offers a spacious interior, with innovative access to the third row.

Based on the award-winning Modular Transverse Matrix (MQB) architecture, the Atlas is also fun-to-drive, a signature of Volkswagen vehicles. Atlas models will be available with two engine options, both with an eight-speed automatic transmission: the four-cylinder turbocharged and direct-injection 2.0-liter TSI engine, which produces 235 horsepower and 258 lb-ft of torque (achieved using premium fuel), and the 3.6-liter VR6® engine, which makes 276-horsepower and 266 lb-ft of torque. An optional 4Motion® all-wheel-drive system is available on VR6 models.

The 2018 Atlas is scheduled to arrive in dealerships in May, and will be available in five trim levels to meet the diverse needs and tastes of U.S. customers.

Atlas S Launch (Limited availability)
Available at launch, and only with the 3.6-liter VR6 engine, the Atlas S Launch model is available as a frontwheel-drive model for $33,500, and with all-wheel drive for $35,300. This model adds the following features to the S trim offerings: panoramic sunroof; Homelink® garage door opener; footwell lighting; 8.0-inch Composition Media touchscreen infotainment system; and SiriusXM® Satellite Radio with a three-month trial subscription.

Atlas SE with Technology
The Atlas SE with Technology model starts at $35,690, and includes a slate of modern convenience and advanced connectivity and driver assistance features, including: Adaptive Cruise Control (ACC); Forward Collision Warning and Autonomous Emergency Braking with Pedestrian Monitoring (Front Assist); Lane Departure Warning (Lane Assist), which actively helps the driver steer the car back into its lane if the driver takes his or her hands off the wheel for a defined period of time, or the vehicle crosses a lane marking without use of a turn signal; power liftgate; remote start; Climatronic® 3-zone automatic air conditioning; and an autodimming rearview mirror. A 3.6-liter V6 SE with Technology FWD model is available for $37,090. A 3.6-liter V6 SE with Technology AWD model is available for $38,890.

Atlas SEL
The Atlas SEL builds on the specifications of the SE with Technology model. For a starting price of $39,160, customers can enjoy even more upscale features: a panoramic sunroof; Easy Open liftgate; 8-way power passenger seat; memory function for driver’s seat and exterior mirrors; front and rear Park Distance Control and a convenient 115v power outlet in the second row (rear of the center console). VR6 models are equipped with a factory-installed tow hitch. A 3.6-liter V6 SEL FWD model is available for $40,890. A 3.6-liter V6 SEL AWD model is available for $42,690.

Captain’s Chairs. Replacing a second-row bench seat, for a total seating capacity of six, Captain’s Chairs will be available in the SE, SE w/ Technology, SEL and SEL Premium models for $625. (Late availability)

R-Line. A performance-inspired R-Line package will be available on Atlas SE and SEL trims for $1,960, and augments the SUV with exterior and interior design elements that give it an even sportier appearance. (Late availability)