He actually went 107 with a tail wind.

At Motor1, we have the utmost respect for speed, performance, and the daredevils who revere such things. So when we heard that The Stig set a new speed record, we were suitably impressed. Then we learned the details, and well, a record is a record; even if it’s set in a bumper car.

To the credit of Top Gear’s faceless racing driver, he did manage an average of 100.3 miles per hour in said bumper car. Actually, he topped out at 107 mph but to make it official for the folks at Guinness World Records, two runs must take place in opposite directions. Those runs are averaged out to take wind out of the equation, yielding a true speed unassisted by nature. That means his second run was only 93 mph, but still, it was enough to set an official record. 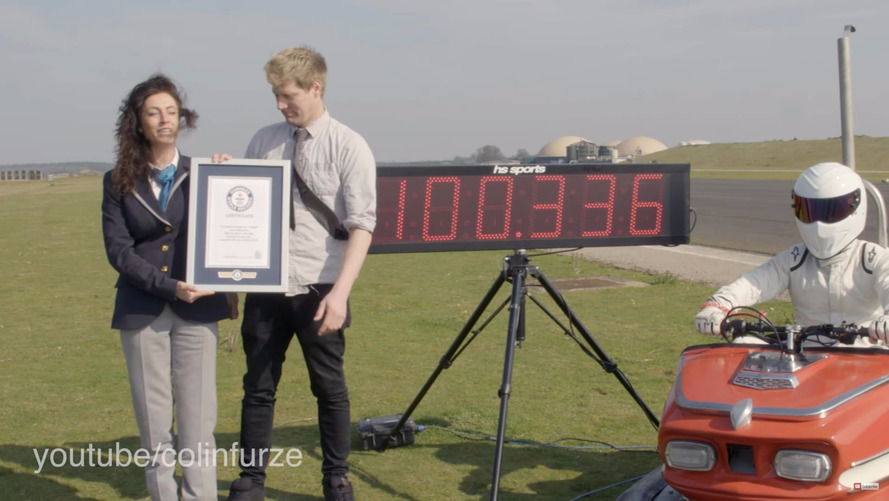 You can choose to be impressed by that, and nobody will blame you. We’ll admit that 100 mph in anything without wings is noteworthy, so hitting triple-digits on a triple-wheel bumper car certainly takes some chutzpah. And lest you think it was really a shifter kart with a bumper car body – to secure the record the bumper car needed to be, well, a bumper car, complete with bumper car wheels, chassis, and body.

Obviously there are some differences from the standard bumper cars you ride at the county fair. It was built by Colin Furze, who’s also built the world’s fastest pram (AKA baby carriage) and a mobility scooter that can go 70 mph. Furze installed a 600cc engine from a Honda CBR 600 sport bike, which was good for roughly 100 horsepower. The three-wheel bumper car layout was retained, however go-kart tires with disc brakes were installed for obvious safety reasons.

So yeah, this "bumper car" has had a fair amount of ingenuity put into it, and Guinness is the real deal when it comes to world records. Still, we can’t help but feel a bit underwhelmed here. There are Guinness records for some pretty spectacular feats, but there’s also a Guinness record for the furthest marshmallow blown from someone’s nose – and caught in someone else’s mouth.

Regardless, we salute The Stig for giving this goofy bumper car a go.