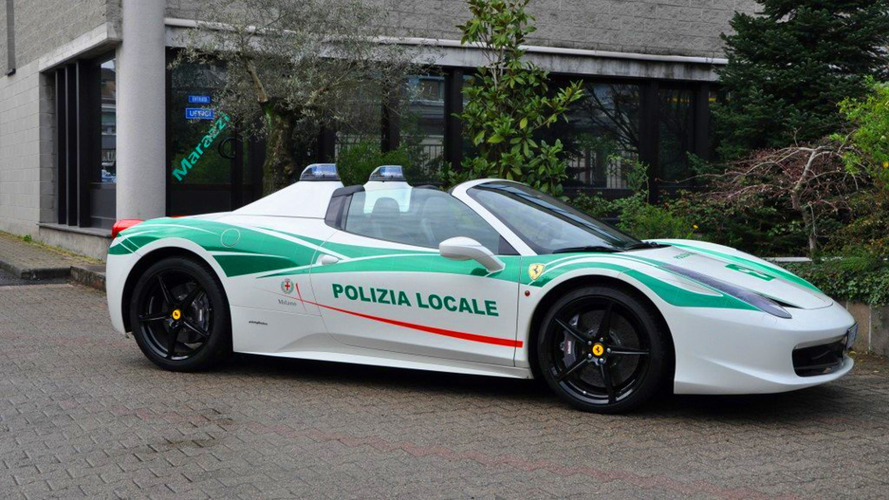 It now has the appropriate paint scheme and lights on the roof.

There’s one less Ferrari in the hands of Italian mobsters because the police in Milan are now using a confiscated 458 Spider for education duty. The droptop supercar even wears a custom paint scheme and has lights on the roof nacelles.

Check Out The Mafia Ferrari 458 Spider On Video:

The cops plan to use the 458 Spider in an effort to show young people that crime doesn’t pay. However, the officers might want to be careful how they word that message because apparently being a mobster offers at least enough money to buy a Ferrari.

Under Italian law, the police and national fire brigade can request to keep the personal property confiscated from the mafia. The cops impounded this specific 458 Spider in September 2015. A company that preps vehicles for police duty performed the work on this one for free.

The police in Milan keep busy busting organized crime. According to the agency’s announcement, they have confiscated 29 other cars and 3 motorcycles from mobsters in the city. All of these vehicles became part of the program for allocating the ill gotten gains to the police and fire departments.

Where the cops in Milan just intend to use their Ferrari for educational purposes, the Highway Patrol in Bologna now has a Lamborghini Huracán that should get a high-speed workout. Officers there are using the car for transporting blood and organs for transplants. A refrigerated section in front keeps the live-saving material cold, and the supercar’s potent V10 lets law enforcement speed through traffic. An on-board defibrillator can also provide assistance during medical emergencies. When not performing medical aid duty, the Lambo takes part in normal police operations. Another Huracán does similar work around Rome.

A Ferrari and a couple Lamborghinis are nothing compared to the absurd collection of supercars that Dubai has for its police force. The emirate’s fleet includes rare models like an Aston Martin One-77 and Bugatti Veyron.