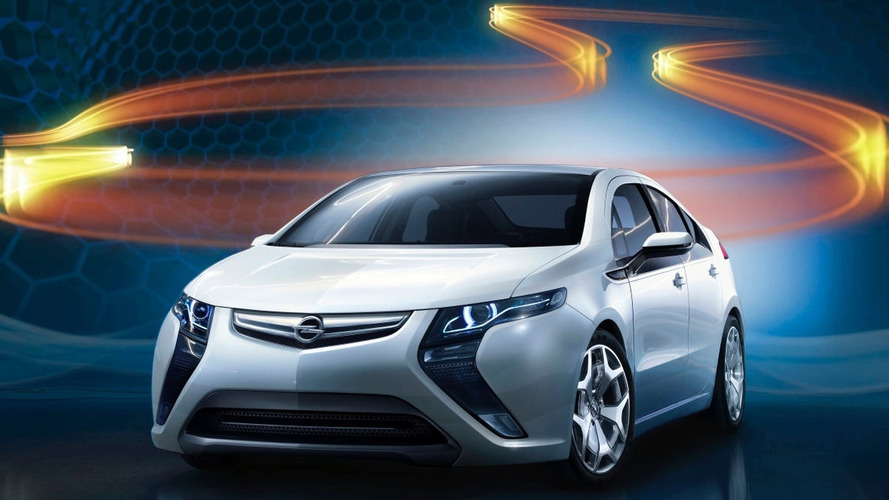 Opel Ampera features GM's Voltec plug-in hybrid system with a 60 km range running solely on the batteries. The Ampera will have an extended range of 500 km by means of a gasoline engine which acts as a generator to re-charge the batteries.

The Opel Ampera is meant to be the European version of the Chevy Volt. Provided that GM and Opel survive long enough to execute that conversion and get either of those models to market.

Here's a teaser image of the Ampera as it will be debuting on March 3rd (for two press days) at the Geneva motor show. (The show opens to the public on the March 5th.)

The Ampera is a 5-door, 4-seat hatch powered by GM's Voltec plug-in hybrid system and is said to have a range of 60 km running solely on the lithium-ion battery. An internal combustion engine acts as a generator to re-charge the batteries which GM/Opel claims will give the car an impressive extended range of 500 km. The Ampera's battery can be re-charged through any 230 volt electrical outlet.

Design on the Ampera's production version will likely be close to what we've seen from images that have been released so far and the spy shots from a couple of weeks ago. Of note are the obvious design cues taken from the Flexstream concept, as well as the Opel Insignia which late last year won European Car the Year award, showing that the Ampera is aiming for a veritable Opel styling identity making it far less likely to be seen simply as a re-badged Chevy Volt.

The Ampera is slated for launch in Europe in 2011.