Fire Causes Bridge On Highway I-85 In Atlanta To Collapse

Investigators don't yet know the cause for the fire.

Investigators are still trying to understand the cause of a fire on a bridge along Interstate 85 in Atlanta, Georgia, that is keeping a portion of the major north-south route closed. A section of road between 75 and 100 feet long eventually collapsed due to the blaze, according to CNN. Authorities have ruled out terrorism as instigating the inferno. There have also been no reported casualties from the catastrophe.

The first reports of the fire came in around 6:00 PM Eastern on March 30, and the northbound side of the bridge collapsed at about 7:30 PM. Firefighters, including some from a nearby airport, were already on the scene at the time but weren't able to quell the blaze. 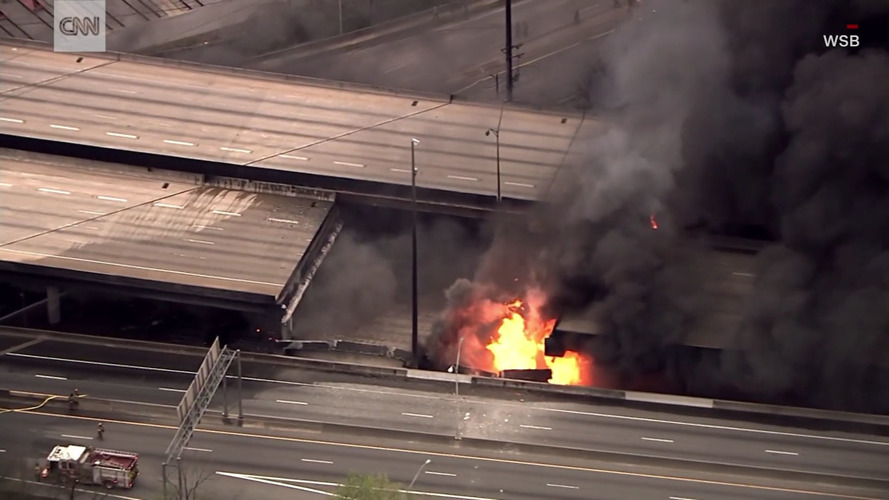 Investigators believe a pile of PVC pipes underneath the bridge fueled the fire. As of this writing, law enforcement still didn’t know how this material caught fire or the pipes’ owner, CNN reported.

Until investigators can inspect the southbound side of the bridge, that route is also closed. The situation is making traveling in Atlanta an absolute nightmare. This section of I-85 has five lanes running in each direction, and an estimated 250,000 vehicles cross the bridge every day, according to CNN. This incident forces traffic onto side streets that can’t hold anywhere near the same volume of cars and trucks.

Georgia’s governor has declared a state of emergency for the county containing Atlanta. Many businesses are also allowing employees to arrive late to give them extra time to deal with the additional traffic.

Experts tell CNN that the traffic snarl could last months. Engineers first need to evaluate the surrounding sections of the interstate for damage, and then a construction company needs to rebuild the bridge. Many residents of Atlanta need to settle in for what looks like a very nasty commute throughout the summer.