Jeep Dishes Out 7 Capable Concepts For Its Annual Easter Safari 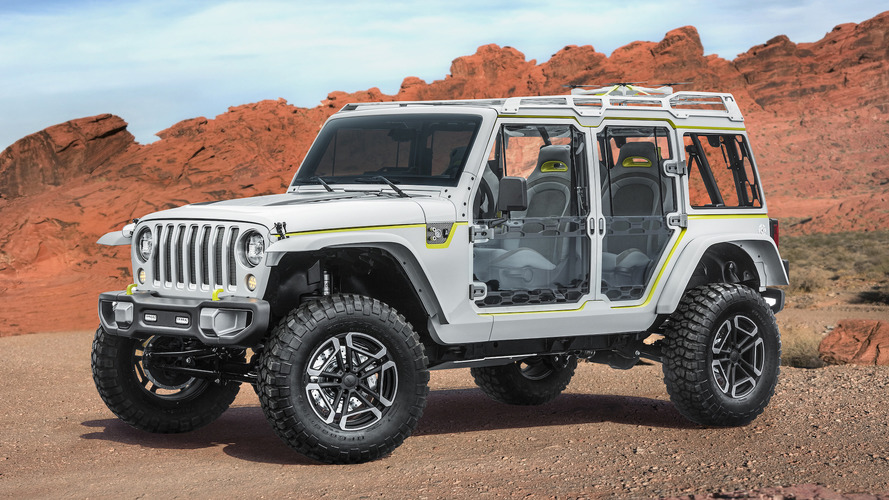 Bigger, badder, and even more capable than before.

The 51st annual Jeep Easter Safari will take to the hills of Moab, Utah in just a few weeks. Not one to disappoint its loyal fanbase, Jeep once again debuted a handful of handsome concepts designed specifically for the journey. Seven of them, to be exact – and they're all awesome.

Celebrating the 25th anniversary of the Grand Cherokee, the Jeep Grand one concept puts a modern twist on the iconic 1993 ZJ. Custom 18-inch lace-style gold wheels (16-inchers were the biggest size offered from the factory), high-clearance fender flares, an extended wheelbase, trimmed fascias, and some subtle wood grain treatment to top it all off.

Power comes courtesy of a 5.2-liter V8 mated to a four-speed automatic transmission. A set of 33-inch BFGoodrich Mud-Terrain KM2 tires paired with a two-inch suspension lift assure that it’s ready for anything in its path. The wheelbase has been extended, too, by moving the front axle forward two inches and pushing the rear axle back by two inches.

To build this concept, Jeep designers started with a 1993 ZJ that they found on Craigslist in Pennsylvania with about 100,000 miles on the odometer. To keep with the '90s nostalgia, note the plaid flannel headliner, wired-in carphone, and Gameboy in the back seat.

With an attempt to bring the outdoors in, Jeep build the aptly-named Safari concept based on current Wrangler. It comes with features like a translucent hard-top roof panel, a two-level aluminum cargo rack – with an incorporated drone – a raked windshield, and a unique set of "windoors" made of aluminum and clear vinyl.

Under the hood is a 3.6-liter Pentastar V6 paired to a five-speed automatic and aided by a set of 35-inch BFGoodrich Mud-Terrain KM2 tires on custom 18-inch wheels. Custom full-length skid plates and steel front and rear bumpers are also included. There's an iPad integrated into the dashboard, too.

"The focus on this is really not for the driver but for the kid in back," explains Jeep designer Mark Allen. Hence why the rear doors are angled slightly to face outwards, giving passengers a better view out.

Looking to hit the dunes? Then the handsome Quicksand concept might be the Jeep for you. Power comes courtesy of a Mopar 392 Hemi with eight-stack injection and paired to a six-speed Getrag manual gearbox. A "peekaboo" cutout in the hood gives it a hot rod feel.

The concept is based on the Wrangler, of course, and comes with a longer wheelbase, an open top and open windows for complete open-air enjoyment. A minimalist black interior with red accents fits two bucket sets, flat aluminum door panels, and a chrome roll bar.

"You're going fast but you're looking good doing it," is how Allen describes this concept. Thee retro-style "Moon Tank" up front houses not fuel but a functional winch, while the staggered tires – 32 inches in front, 37 inches in rear, on matching 18-inch wheels – lend this car a raked stance.

Using the all-new Jeep Compass as its base, the Jeep Trailpass concept pairs a 1.5-inch lift kit to new 18-inch wheels and a 2.4-liter Tigershark engine. The exterior wears Gloss Black side mirror caps, a custom hood graphic, side stripes, and a Mopar/Thule roof basket with a roof bag and traction mats. The tow hooks are orange, rather than red as they are on a stock Trailhawk, a color that's picked up in the accent pockets in the wheels. The new tires are bigger than stock, with approximately a one-inch bigger outside diameter, helping raise this Jeep even more than just the lift kit manages.

Jeep says its new Switchback concept, based on a Wrangler Rubicon Unlimited, is the "ultimate in off-road performance." And with the assortment of Mopar and Jeep performance parts, how could you argue? A front and rear Dana 44 axle, a four-inch lift with remote reservoir Fox shocks, and heavy-duty differential covers assure that it’s ready for any trail.

The exterior wears a concept hood and half doors, finished off with a concept “Safari” hard top and roof rack setup. At its core is a 3.6-liter V6 paired to a five-speed automatic transmission.

This isn’t the first time we’ve seen the CJ66 – the concept first made its debut at SEMA in 2016. Nevertheless, the Wrangler TJ-based 4x4 will hit the trails in just a few weeks, complete with a 5.7-liter Hemi V8 good for 383 horsepower (285 kilowatts) a six-speed manual transmission, and plenty of off-road ready additions.

The brightest of all the Jeeps on this list – literally – is the Jeep Luminator concept. The SUV comes with a full arsenal of lighting features that deliver superior visibility on the trail. The new lights were jointly developed with the Automotive Lighting division of Magneti Marelli.

Some of the more notable features include a scanning LED light bar module with active spot and dynamic following technology, a center high-mount stop light on the rear that comes with four-colored LED indicating stop (red), 1-3 miles per hour (amber), 3-25 miles per hour (green), or rear flood lighting (white). The front LED foglights are linked the steering angle, lighting up the sides of the Jeep when you turn side to side. There’s even a solar panel on the roof that helps charge a battery pack to power an inverter, plus a lighted landing pad for drones. If the taillights look familiar, well, it's because they're Ferrari parts.

All seven of these Jeep concepts will hit the trail beginning on April 8, 2017.