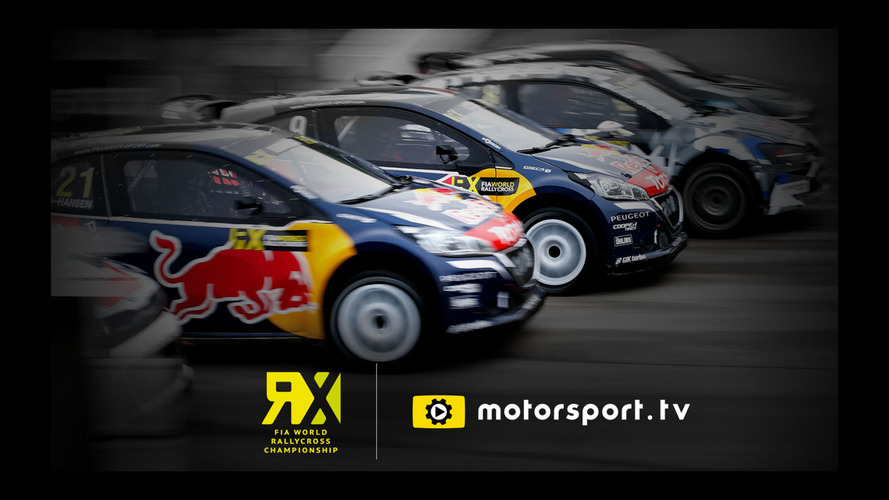 The series begins this weekend for the first round in Barcelona.

March 30, 2017, Miami, Fl. – Motorsport Network, the owner of Motorsport.com,  Autosport.com  and Motorsport.tv today announced an agreement to be the exclusive live broadcaster of all 12 rounds of the FIA World Rallycross Championship in the United Kingdom and Ireland.

Each round will be shown live on the channel and via Motorsport.tv’s online Internet TV platform, where subscribers can also access a catalog of past WRX events, providing hours of racing action.

Highlights and as-live footage of the qualifying sessions will be followed by full live coverage of the semi-finals and finals, as well as interviews, grid walks and podium celebrations.

On the Thursday after each event, Motorsport.tv will air a 24-minute magazine show, Inside World RX, which will supplement the live broadcast with all the latest news and information from around the paddock.

The series heads to Barcelona for the first round this weekend (March 31-April 2), with live coverage on Sunday from 13:00 BST on Sky Channel 447 and Virgin Media 545.

Andrew Coley will be joined by Liam Doran and Andrew Jordan in providing commentary for the full season.

The agreement is part of Motorsport Network’s strategic intent to build the calibre of its portfolio and to integrate its Motorsport.tv properties into news coverage on Autosport.com.

Motorsport.com’s Chairman, Zak Brown: “The FIA World Rallycross Championship is non-stop action and makes for a compelling television proposition. For us to be exclusively broadcasting this live on our new TV channel is fantastic news and is a statement of intent about Motorsport.tv’s ambition to secure the very best series for our audiences.”

VP of Programming & Acquisitions, Gilbert Roy: “We are delighted to bring the FIA World Rallycross Championship to the fans in the UK and Ireland. The series has gone from strength to strength these past few years and with Motorsport.tv it will continue to grow.”

World RX managing director for IMG, Paul Bellamy: "We are pleased to have agreed a new TV deal across the UK and Ireland with Motorsport.tv for all 12 live events in 2017. Motorsport Network has rapidly grown over the past year and this new deal will also see rallycross covered extensively on its digital platforms."

For more information on how to subscribe to the new motorsports oriented network, visit Motorsport.tv.

Motorsport.tv is part of the Motorsport Network:

Motorsport Network connects hundreds of millions of people who love motorsport and cars. Our technology and distinct brands distinguish our unique content and services to help us engage motorsport and auto fans in 17 languages. We connect this universe with television, digital content, live events, e-commerce, gaming and social networking to unify people with a passion for all things automotive. As a global digital media company, we are your gateway to the world of motorsport and cars.