Opel Brings Eight Past And Present Flagships To Techno Classica 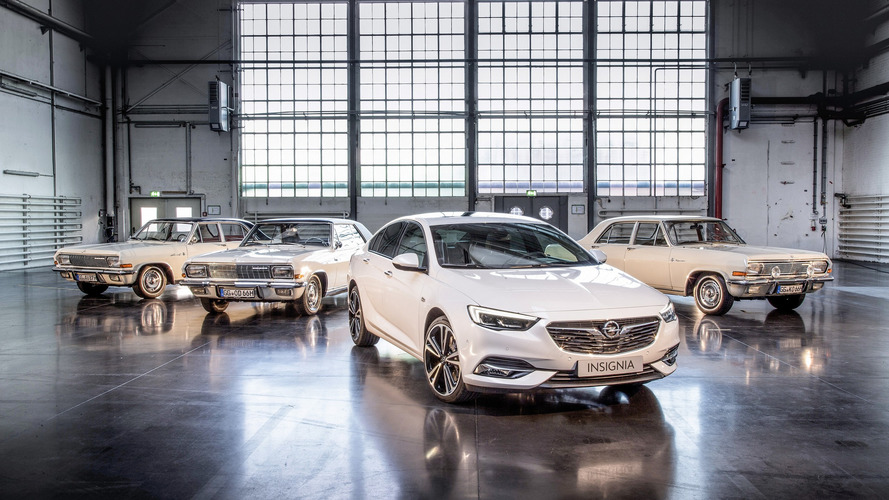 From the pre-WWII Admiral to the all-new Insignia.

"The Opel Flagship" – under this motto the German brand will exhibit its large models from the last eight decades, from the pre-WWII Admiral to the all-new second generation Insignia, during the Techno Classica in Essen, Germany.

Ten years after the launch of the Admiral and Super 6 in 1937, both featuring six-cylinder engines, the first generation Kapitan saw the light of day, one of the bestselling six-cylinders in Germany. It was also popular abroad, as nearly 60 percent of its production was exported. The example that will be on display in Essen has a very important place in the company’s history – it’s the two-millionth Opel ever built and features 24-carat gold plated decorative elements.

In the mid-1960s, Opel’s upper class consisted of three models - Kapitan, Admiral, and Diplomat. During this decade, the brand started offering V8 engines for the first time in the flagship Diplomat model. The motor was sourced from the United States, linked to an automatic transmission, and was delivering 190 horsepower. In 1965, the V8 was introduced as an option to the Kapitan and Admiral with only 113 and 622 units sold respectively.

Forty years after the debut of the original Admiral, Opel introduced the Senator, the brand’s spearhead of the model portfolio. The Senator and its coupe version, the Monza, were the first Opels with an independent rear suspension and are still considered as two of the most spectacular vehicles the German marque has ever created.

Another forty years later, in 2017, Opel introduced the all-new, second generation Insignia, which will make its first home appearance in Essen following its public debut in Geneva earlier this month. We’ve discussed the sexy new sedan and wagon a couple of times, but this time Opel highlights their latest generation matrix LED headlights and sophisticated all-wheel drive system with torque vectoring. The model is already on sale across Europe.

Rüsselsheim.  Opel’s big boys have got their sights firmly set on the 29th Techno Classica in Essen, where Opel Classic and the enthusiasts from Alt Opel IG (vintage Opel owners club) will exhibit big cars from Rüsselsheim from both past and present. “The Opel Flagships” is this year’s motto and the cars will be on show at the stand with a total surface area of 400 square meters in Hall 2. The legendary pre-WWII Admiral that celebrated its premiere in 1937 is the spearhead of the Opel fleet. It is hard to imagine that the wonderful art déco style chassis is already 80 years old when you see it up close. The journey through time continues with the two millionth Opel produced, a 1956 Kapitän. Typical representatives of the KAD models such as a 1968 Diplomat A and a 1970 Opel Admiral – two true street cruisers – are also present. The 1978 Senator A is a typical design from the somewhat more matter-of-fact 1970s, whereas the new Opel flagship, the Insignia Grand Sport, demonstrates Opel’s current design philosophy of “Sculptural artistry meets German precision”:

From 1937 to 2017: From the Opel Admiral to the new Opel Insignia Grand Sport

The large Opel cars can look forward to enjoying the limelight at the Techno Classica in Essen – just like they did in Rüsselsheim 80 years ago. To mark the 75th anniversary of the Adam Opel AG on February 17, 1937 the company presented two visionary newcomers: The Admiral and the Super 6. Both cars were equipped with modern engine technology. Inline sixes with displacements of 3.6 and 2.5-liters and 75 hp and 55 hp respectively. The Admiral was the first member in a line of luxurious models that continued for 40 years. The Super 6 paved the way for the popular 1938 Kapitän.

Ten years later the first post-WWII Kapitän left the plant and the economic miracle saw it rise meteorically. The Kapitän was one of the bestselling six cylinders in Germany and became an international bestseller with 60 percent of all Kapitäns being exported. The Kapitän built on November 9, 1956, and on display in Essen plays a special part in the success story. As the two millionth Opel ever built, its roof was painted in gold and it also sports 24-carat gold plated decorative elements. Opel was the first German and European carmaker to surpass the two-million mark.

The Opel upper class was completely overhauled in 1964. The “Big Three” were called Kapitän, Admiral and Diplomat and for the first time in its history Opel offered V8 engines. The ranking order in the premium class was determined by equipment and engine size. The Kapitän and Admiral initially came with Opel’s proven 100 hp, 2.6-liter six-cylinder engine, whereas the Diplomat’s engine was sourced from the United States. The flagship of the KAD series featured a 4.6-liter V8 with 190 hp. As of the spring of 1965 both the Kapitän and the Admiral could optionally be ordered with the 4.6-liter V8 engine and automatic transmission used in the Diplomat. To this very day the Kapitän and Admiral V8s are models with a special status: Only 113 units of the Kapitän and 622 units of the Admiral were built.

The members of the second KAD range were completely overhauled from 1969 – and grew in all areas. The Kapitän once again represented the entry-level KAD model. Its 2.8-liter inline six delivered 132 hp. Above it, sat the comfortable Admiral that delivered 145 hp at the 2800 S variant and 165 hp as the Admiral 2800 E. The top-of-the-line engine was the 5.4-liter V8 with 230 hp that came as standard in the Diplomat.

40 years after the Admiral made its debut, the company brought another new big Opel to market. From 1977, the Senator was the spearhead of the model portfolio. The Senator and its coupé sibling the Monza were the first Opel cars with independentl rear suspension and space-saving mini-block coil springs.

Another four decades down the line, eighty years after the Admiral, the time has come for another major debut: The new Opel Insignia Grand Sport will make its first home appearance at the Techno Classica.

The all-new Opel Insignia is in extremely good shape. It has the sporty elegance of a large coupé, its completely new architecture makes it uncompromisingly spacious and truly fun to drive, and it offers exemplary safety and comfort features just as a true flagship should. Not only does the second-generation Insignia impress with its breathtaking lines on the outside and great wellness atmosphere on the inside, it also provides the widest range of intelligent technologies reaching from the trendsetting Opel IntelliLux LED® matrix headlights and the very sophisticated all-wheel drive system with torque vectoring to ultra-modern driver assistance systems and a refined head up display. In addition, the Insignia comes with Opel-typical first-class connectivity with smartphone integration which now offers a new Opel OnStar feature – the Personal Assistant which allows Insignia occupants to book hotel rooms[1] and search for parking[2] via an OnStar Advisor. Overall, the new Insignia wows with high agility and driving precision, more space and a superb price-performance ratio that now more than ever make it a contender to be reckoned with, even for premium brand models.