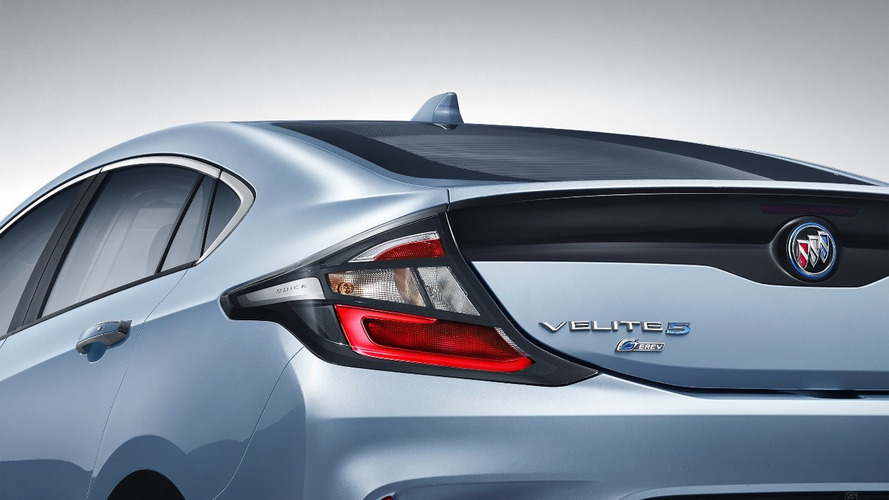 Buick says it will have an electric range of around 62 miles (100 kilometers).

Billed as being Buick’s very first extended range electric vehicle (EREV), the Velite 5 is a China-bound model that looks awfully familiar. The adjacent teaser image provides a glimpse of the car’s derriere and reveals it will have many things in common with the latest generation Chevrolet Volt.

The namesake concept (pictured below) introduced by Buick back in November last year had a substantially different design, but it seems the road-going model will remain faithful to its Volt roots. It doesn’t come as a big surprise the Velite 5 will be a Buick-badged Chevy Volt considering the model with the bowtie emblem is not available in China.

What’s interesting is the fact Buick says the Velite 5 will have an electric range estimated at 62 miles (100 kilometers) whereas the U.S.-spec Volt is rated by EPA at 53 miles (85 km). In addition, the Chinese version of the car aims to provide a total range of more than 466 miles (750 km), which is considerably more than the 420 miles (676 km) of the equivalent Chevy model. There is a simple explanation for these discrepancies: China’s testing methodology is significantly more optimistic than EPA’s. In the real world, the two cars will likely have very similar ranges.

The Velite 5 will use a 1.5-liter gasoline engine, which likely generates 101 horsepower (75 kilowatts) and 103 pound-feet (140 Newton-meters) of torque as it does in the Volt. Details about the electric motor have not been provided, but expect output to stand at 149 hp (111 kW) and 294 lb-ft (398 Nm). As for the lithium-ion battery pack, it’ll likely have an 18.4-kWh capacity as it’s the case with the car’s American counterpart.

The Buick Velite 5 is going to be launched shortly in the People’s Republic and will be followed in the next two years by other hybrid and electric cars.

SHANGHAI – Buick announced today that the Velite 5, its first extended range electric vehicle (EREV), will be launched shortly in China.

The Velite 5’s pure electric driving mode is prioritized to meet daily user demand for zero emissions and fuel consumption, with the electric driving range surpassing an estimated 100 km. In EREV mode, the model can deliver a total driving range of over 750 km, eliminating so-called “range anxiety” and opening a new chapter for electric mobility in China.

Last year, Buick launched the all-new LaCrosse Hybrid Electric Vehicle and hosted the world premiere of the Velite Concept, which served as the template for future new energy vehicles under Buick's strategy in China.

Buick is an international brand offering vehicles with sculpted designs, luxurious interiors and thoughtful personal technologies, along with responsive-yet-efficient performance. Buick is attracting new customers with its portfolio of award-winning models in North America and China. Buick has sold over 8 million vehicles in China since its introduction by SAIC-GM in 1998. More information on the Buick brand in China can be found at Buick Media Online.