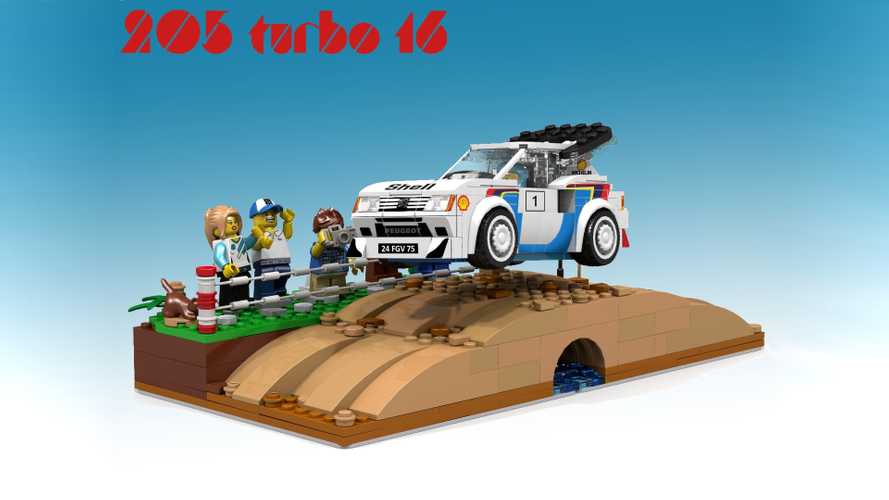 Lego's Speed Champions line doesn't have a rally car yet, and this would be the perfect kit for introducing one to the product range.

There’s no shortage of cool automotive proposals on Lego Ideas, but the new submission for a diorama featuring a jumping Peugeot 2015 T16 Evolution 2 rally car from the Group B-era is one of the most impressive projects ever.

Creator AbFab1974 imagines this diorama as being part of Lego’s affordable Speed Champions line of kits, which already includes small versions of the Ford GT, Bugatti Chiron, and Mercedes-AMG GT3. This set includes a model of the Peugeot 205 T16 Evo 2 with a roof that lifts off for sitting the driver inside. Custom decals give the racer the appropriate color scheme and sponsorships. Our only minor gripe is that we wish the car could be a little wider so that there would be room for fitting a co-driver inside.

The landscape portion of the kit includes a complex hill where the builder could stage the car. There are also spectators watching the rally. Plus, plants, signs, and a fence provide some additional scenery.

AbFab1974’s promo photos show the Peugeot jumping over the hill, but that doesn’t appear possible without a little help from Photoshop. Perhaps if the kit goes into production, Lego could include some stilts for positioning the rally car in the air.

The Lego Ideas requires 10,000 people to vote in support of a project. If it reaches that goal, then a panel from the plastic brick company evaluates the design for production. As of this writing, this rally car diorama has 1,153 supporters and well over a year for garnering the rest.

The Speed Champions line already includes several race cars, but this would be the first from rallying, if it gets enough support. The diorama looks so good that we want to see the kit on store shelves in the future.