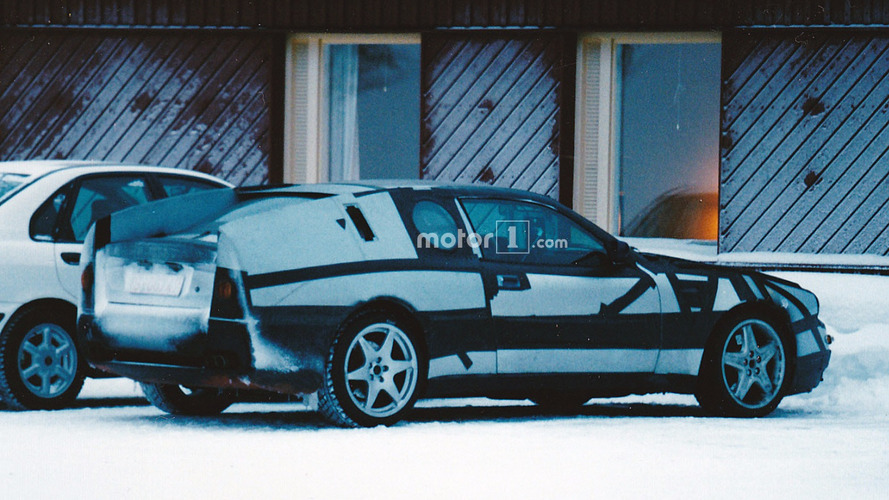 This one should be the most difficult of them all so far.

One of the oldest spy shots in our weekly series, it dates back to the mid-1990s showing what might seem at a first glance a prototype of a shooting brake if you only take into account the side profile. However, that’s not the case as the extra panels on top of the rear fenders were there to camouflage the car’s real design and its body style.

Speaking of appearance, it represents the work of a famous design house and it came up with a rather interesting shape for the taillights, although you can’t actually see them in the adjacent spy image. The vehicle had a curvaceous and elegant body, but the pretty face wasn’t enough to make the car successful taking into account it never really took off in terms of sales. As a matter of fact, the model in question was short-lived as it was available mainly in Europe for only several years during which less than 5,000 vehicles were sold.

Before being axed, the car received a hardcore version capped at roughly 250 units fitted with a handling package and sold with a choice of only three exterior colors. Offered with both manual and automatic transmissions, these cars came equipped with a lowered and stiffer sports suspension along with a more aggressive body and several other upgrades inside the cabin. The special edition's suffix might ring a bell among gamers as a very popular racing simulator has the exact same moniker.

The car’s replacement received a different nameplate and carried over most of the front end styling, while those unique taillights were drastically modified. The droptop model was actually the first to be revealed and it signaled the company’s return to North America after more than a decade of absence.

We invite you to have a go at identifying the mystery prototype in the comments section below. Check back tomorrow morning (GMT) to find out the answer to this week's car spy photo trivia.