Honda's engineers know how to make a four-cylinder sound good, and the one in the Civic Type R makes a great noise.

The Honda Civic Type R is one of the most anticipated hot hatches arriving in 2017, and a new video gives us a brief chance to hear its raspy growl. We can’t wait to get an earful of the noise from behind the wheel. McLaren-Honda Formula One driver Stoffel Vandoorne has already had the pleasure of experiencing the Type R’s sound because he was the first person to publicly drive one in Australia.

The Civic Type R goes on sale in Australia in the fourth quarter of 2017, but potential customers in the United States have a much shorter wait. Honda is giving the hot hatch its debut in the United States at the New York Auto Show in April, and sales should begin sometime in the late spring.

American buyers will only be able to get the Type R in fully loaded Touring spec, and it’ll cost around $35,000. The hot hatch will come loaded with equipment, including a seven-inch infotainment system with navigation and full LED headlights. Under the hood, a 2.0-liter turbocharged four-cylinder in the U.S. will produce 306 horsepower (228 kilowatts) and 295 pound-feet (400 Newton meters) of torque that will route through a six-speed manual to a limited-slip differential at the front wheels. The gearbox will even rev match by itself. Brembo supplies the brakes, including 13.8-inch rotors in front and 12-inch units in the rear. 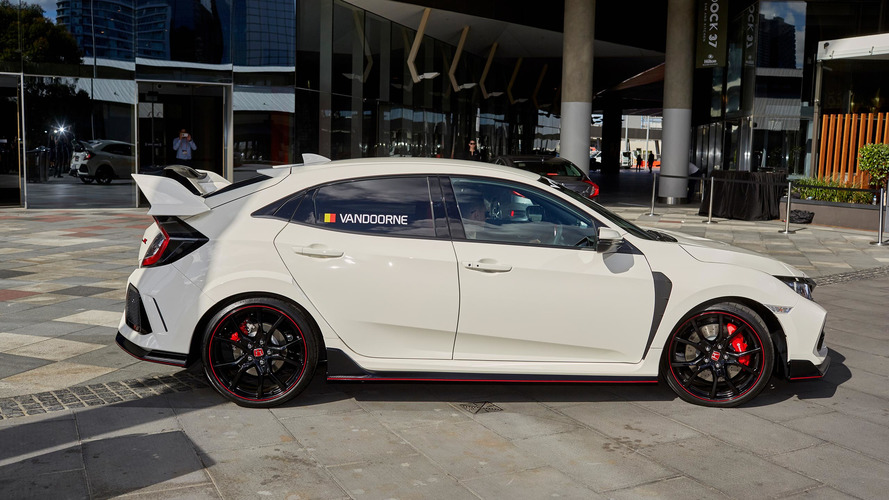 If you’d prefer a vehicle that’s a little less rowdy than the Type R, then the Civic Si is also on the way sometime in 2017. It uses a turbocharged 1.5-liter four-cylinder that should make in excess of 200 hp. Honda will only offer this trim on the sedan and coupe bodies, and the Type R will be exclusive to the hatchback. Spy shots indicate that the production version looks a lot like the concept from last year’s Los Angeles Auto Show.

The young Belgian enjoyed a brief stint in Honda’s high-performance hatch, ahead of what will be a thrilling opening to the 2017 Formula 1® Rolex Grand Prix in Melbourne. It is the first public showing in Australia for the Honda Civic Type R following its global debut at the Geneva International Motor Show earlier this month.

“It’s a superb looking car and faithful to the ethos of what makes the Type R great — a superb engine, excellent dynamics and Honda’s proven quality and reliability,” Vandoorne said. “As a high-performance hatch showcasing Honda’s technological expertise, it’s also perfectly at home in the world of Formula 1.”

Flanking the Honda Civic Type R on its arrival at the Hilton Melbourne South Wharf were the Civic sedan and soon-to-go-on-sale Civic RS hatch.

Honda Australia Director, Mr. Stephen Collins, said having the Civic trio lined up for the first time, signaled to buyers that there were distinct models to suit the diverse Honda Civic customer base.

“We now have a defined Civic family look that unites all three models,” he said. “The sedan and hatch are bold and distinguished while the Type R justifiably represents the pinnacle of performance in the Honda Civic line-up.”

The Honda Civic Type R shares the same fundamentals as the Civic hatch and has been designed from the ground up to reward enthusiast drivers.

The 2.0-litre VTEC Turbo ‘heart’ of the multi-award-winning previous generation Type R has been optimised and refined for the all-new model to produce 235 kW of power and 400 Nm peak torque, along with improved throttle response and driveability.

It is matched to a smooth and precise six-speed manual transmission that now features a rev match control system, ensuring no compromise in the Type R’s intimate, rewarding connection with the driver.

The Honda Civic Type R will go on sale in Australia in the fourth quarter this year. Pricing and specifications will be announced closer to launch.

The new Honda Civic RS hatch will be on display in the foyer of the Hilton Melbourne South Wharf over the 2017 Formula 1® Australian Grand Prix weekend – its first official public display before arriving in Honda dealerships in May.