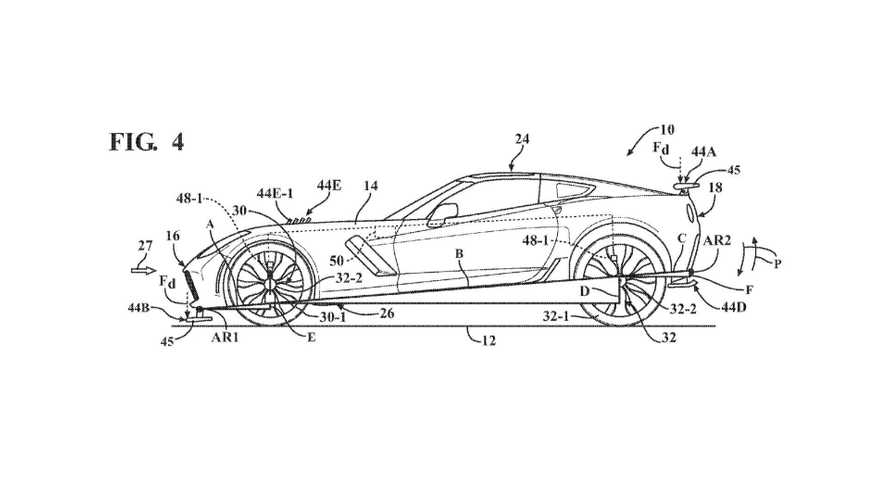 By adjusting the aerodynamics with the ride height, future GM products could have even sharper handling.

Active aerodynamics lets automotive engineers work some real magic when designing a new vehicle because they can adjust the airflow for high downforce at some moments and for slicing through the air at others. A recent patent from General Motors adds one more tool by linking the aero tweaks to the suspension’s ride height. The official documents use a Corvette as a demonstration, which might point towards a future a future application of this tech.

According to GM, the active aero elements could be “may be one of an adjustable spoiler, an air dam, a splitter, a diffuser, and shutter,” and these components could be either at the front or rear of the vehicle. The company describes using either lasers or ultrasonic sensors on the suspension for monitoring the distance from fixed point on the vehicle.

Being able to adjust the aerodynamics according to the vehicle’s ride height could offers some tangible cornering benefits. For example, GM says in the patent description that the sensor could monitor body roll during a turn. The adjustable elements could then change to improve handling in that situation. The document even mentions monitoring steering inputs and tweaking the aero accordingly.

While GM’s patent images portray a Corvette, this tech could work on any of the company’s vehicles. It’s easy to imagine the benefits that a future Chevy Camaro or Cadillac CTS-V might gain from being able to link adjustments to their ride height and active aerodynamic components. In combination with the already impressive MagneRide magnetorheological damper system, this development could lead to even better handling vehicles and also provide the ability to dynamically tweak the airflow around a vehicle depending on the situation.

GM filed for this patent on May 24, 2016, and the United States Patent and Trademark Office just published it on March 23, 2017. Since the active aero tech was under development last year, the engineers potentially had time for incorporating it into the upcoming mid-engine Chevrolet Corvette. The system would be one more way of making the new model an even more revolutionary upgrade for the brand’s famous sports car.