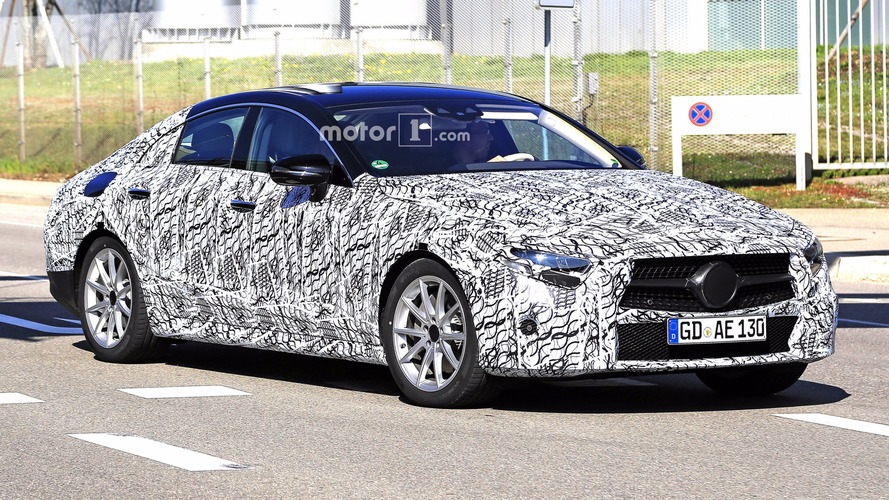 Prototypes with less disguise than ever are now roaming the streets of Germany and Spain.

Earlier this month, the 2018 CLS was spotted in the still wintery northern Europe getting a refill at a gas station and now another two test vehicles have been photographed in a considerably warmer climate. One caught on camera in Stuttgart while the other was seen somewhere in Spain, these two prototypes had slightly less camouflage than before to allow us check out more of the final design details of Mercedes’ sexy new sedan.

Set to be positioned between the E-Class Sedan and the flagship S-Class Sedan, the new CLS will likely retain its moniker rather than switching to the “CLE” nameplate as some reports are indicating. Mercedes did update its nomenclature structure some years ago to better reflect the similarities in size between two models, but the CLS was not affected by the change.

Even though it will be closely related to the E-Class Sedan, the new CLS is going to adopt a significantly different design with a swoopy roofline and a very long hood. It already looks good despite the heavy disguise, although some had been hoping for a shorter rear overhang. The narrow windows will hamper visibility, but that’s a sacrifice owners will have to make to get that sleek side profile.

The wheelbase has probably been stretched to ensure extra legroom for passengers sitting in the back, while the trunk’s capacity is also expected to receive a bump in size to make the CLS a better companion on extended trips. The quality and refinement inside the cabin should go up a notch over the E-Class to better reflect the car’s position in the lineup and its higher starting price.

Chances are the sedan will be the only CLS-badged model taking into account reports are indicating the CLS Shooting Brake won’t live to see a new generation, so the new Porsche Panamera Sport Turismo won’t have to worry about a rival with the three-pointed star badge.

These CLS prototypes appear to be production-ready, so it won’t be too long until Mercedes will remove the camo to host the world premiere. It might happen at the Frankfurt Motor Show in September, although an online reveal could occur a few weeks sooner.