How F1 2017 Wider Tires Are Shaking Up Pitstops 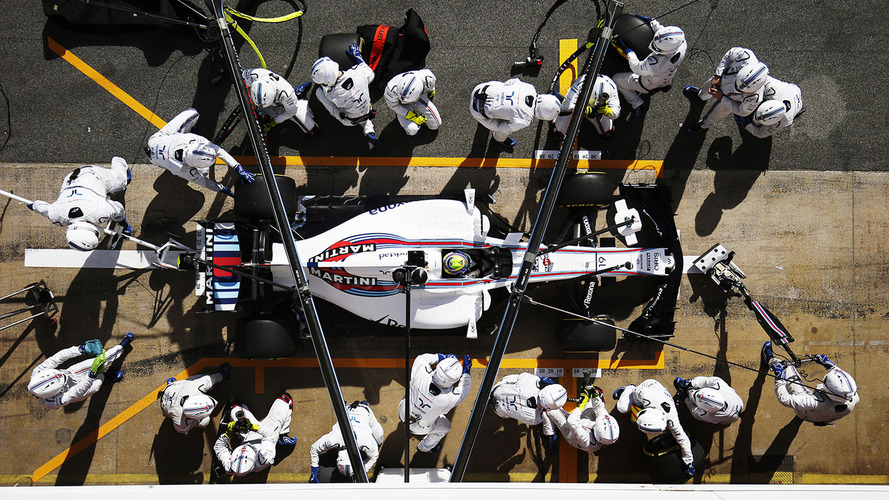 F1's move to wider tires this season was motivated by the desire to make cars look better and go quicker, but it is not just on track that their difference is being felt.

For the bigger and bulkier tyres – 60mm wider at the front and 80mm wider at the back - have thrown a spanner in the works when it comes to not impacting on pitstop times.

The extra weight of the wider tyres, plus complications that come from the sighting and removal of nuts from inside the deeper rims, has made it more difficult to deliver the kind of consistently quick stops that had become the norm in recent years.

But teams haven't sat back and accepted things will be slower, because they are determined to not let any time slip away.

Last season, it was Williams who came out on top in terms of delivering the fastest stops over the course of the season.

Its crew was fastest overall at 11 of the 21 races – with its peak showing being a 1.92 seconds stop at the European Grand Prix in Baku.

Sporting manager Steve Nielsen is immensely proud of the way his team went from one of the pitlane's most troubled teams to the benchmark squad in the space of two years – which is why so much effort has been made to keep its edge in 2017.

"F1 is fiercely competitive on and off the track – and I don't suppose for the moment that our competitors liked us being quicker than them, especially because we were a team that were famous actually for not being quick at pitstops," he told Motorsport.com.

"There wasn't much technical trickery in it. There was a little bit, but the big thing we changed at Williams was that we got the end user – by that I mean the actual crew – to talk directly to the people that were designing their equipment and designing the car.

"So it was the interface between their equipment and the car. And that was it really. If there was one thing we changed, it was that. And from that came a lot of benefit."

Well aware of the effort needed to stay on top in the pitstops, Williams began preparing for the 2017 changes in the middle of last year.

It started with designing new equipment for the changes, and some early practice on a 2016 car with heavier wheels fitted. Actual practice stops began earlier this year when Pirelli released the definitive 2017 tyres.

Although the increase in tyre weight (a front tyre has gone up from 8.5kg to 9.5kg, while the rear is 2kg heavier – coming in at almost 12kg now) are not enough to slow things down from a strength perspective, there are other consequences from the changes.

Nielsen said: "A Williams pitstop involves 34 actions – so 34 things have to happen in the space of two seconds. And any one of those going wrong can stop you and delay the pitstop.

"Of those 34 actions, 12 are affected by the bigger and heavier wheels. There is an awful lot of stuff that isn't affected, but there are some things that are.

"For example – the wheel is bigger and heavier, the wheel nut, particularly on the rears, is further inside so it is more difficult for the gunman to get to. There is a degree of change to the equipment and technique that had to be developed to cope with that."

One of the issues that Williams thought would impact the speed of the pitstop was the wider 2017 rims meaning the wheel nut is visible for less time as the car comes in for a stop.

"It doesn't help," added Nielsen. "We were afraid of that before we started practising with the real kit. But that has actually not been as much of a fuss as we thought it might be.

"The limiting factor is actually the transition. From the moment the wheel is undone, it is getting that wheel off and putting the next one on. That is where we are seeing the extra time creeping in.

"It's because there are three people moving within a few centimetres of each other and this wheel is much, much wider than it was.

"So the clearances between the crew have to be more, they have to give each other more space and that adds a tenth or two. So it is more the transition of getting the old wheel off and putting the new one on, than it is about undoing the nut or doing it up."

The proof of the impact on time will not be shown until the heat of competition comes into play in Australia this weekend, but Nielsen says that early analysis from practice shows that there will likely be a noticeable difference on the stop watch.

For while there are times when the stops are as quick as they were last year, it is proving harder to deliver the optimal times as often.

"What we have seen so far is that the ultimate times that we were doing last year are still achievable, but there is just more of a scatter," he said.

"A very good pitstop last year was perhaps two seconds, or just under – 1.9 seconds. We can still hit those targets, but there is more of a spread down to the mid 2.4s, 2.5, 2.6s – more than we were seeing last year."

And with F1 perhaps heading to a season where one-stop races will become the norm – and overtaking may be easiest in the pits – it is the delivering at every stop that is key.

"Although it is very nice to do a 1.9 seconds pitstop, everyone talks about it, it is great, and it is a sort of badge of pride, the most important thing for us is the consistency," said Nielsen.

"So if you are doing four stops, there is no point one doing one at 1.9 seconds if the others are 3.5 seconds. I would sign now for them all being sub 2.5 seconds. It is consistency where it is at."

F1's focus on the stop watch won't only be revolving around the cars on track this weekend then, because the pitstop battle looks like it is going to be just as intense.