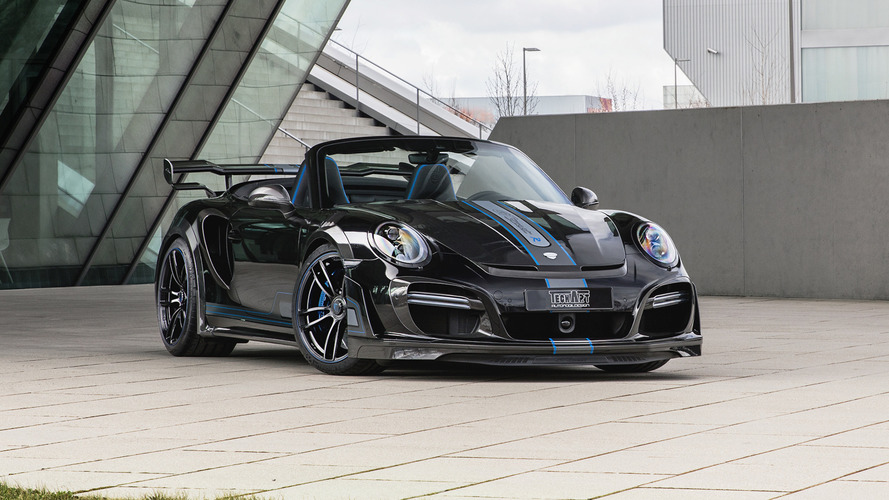 Techart's new Porsche 911 project is already an insane creation in itself. The dramatic bodywork, the extravagant exterior design, and the 711 horses (530 kilowatts) under the hood should be enough to satisfy anyone with a desire for outrageous speed. Still, the company went and built one without a roof.

None the less dramatic or powerful, Techart's GTstreet R Cabriolet comes with a 711-horsepower (530-kilowatt) engine that allows it to sprint from 0 to 60 miles per hour (96 kilometers per hour) in just 2.7 seconds, and continue on to a top speed of 211 mph (340 kmh). All that power is paired to a PDK gearbox and some pretty dramatic bodywork.

The rear wing looks like it was ripped off a GT2 RS, and has the ability to rise and tilt up to 15 degrees in Performance mode for additional downforce. The added aero package on top of the bodywork, meanwhile, was tested in a wind tunnel and produces 707 pounds (321 kilograms) of downforce at 186 mph (300 kmh), and looks good doing it.

The interior is a mix of leather and Alcantara, and invokes the same styling as the exterior. The dashboard, center console, roof liner, and even sun visors are covered in Alcantara to give it a more luxury feel. The gear knob, the gear lever surround, the seat adjustments, and the air vents are finished in a custom color to match. The entire cabin is hand-tailored to the customer's liking.

Other additional features include a set of forged centerlock 20- or 21-inch wheels, some dramatic Techart-derived exterior styling options – pictured here in black and yellow – and a custom titanium exhaust system, which undoubtedly sounds great paired to Porsche’s signature flat six. The company doesn’t say how much the package will cost buyers on top of the price of a standard 911 Turbo. But then again, if you have to ask...