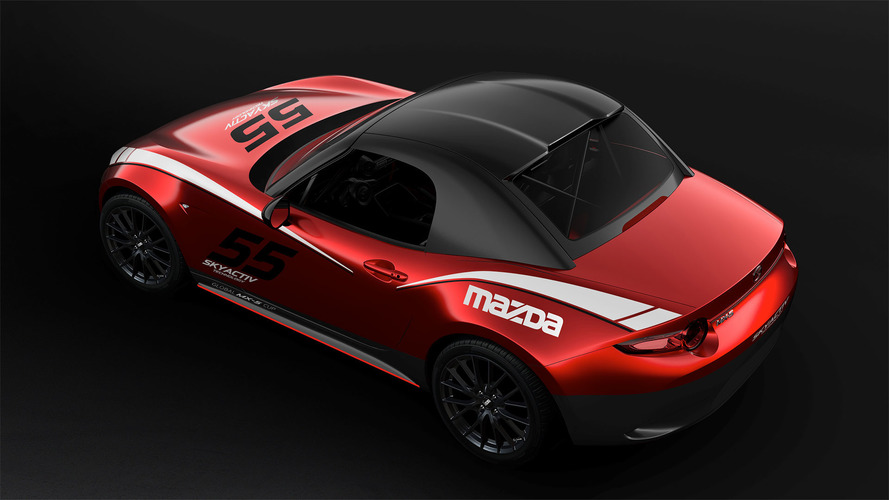 Available only to competitors, the new roof is for the latest Miata race car.

It’s all well and good for Mazda MX-5 Miata owners to drop the fabric top – or lower the powered Retractable Fastback – on public roads, but what about racers who want a little more protection from the elements? Mazda Motorsport is now releasing a factory-backed hardtop for the newest MX-5 Cup racing car model.

The hardtop will only be sold to approved racers who are part of the Mazda Motorsports program and either own or have ordered the MX-5 Cup car. It costs $4,420, with the first deliveries scheduled for this April.

By adding the hardtop, Mazda says that the MX-5 Cup will be legal for racing in more series, specifically opening the roadster up to use in SCCA series, NASA Club Racing, and the Pirelli World Challenge TA class. The MX-5 is already competing in the Battery Tender Global Mazda MX-5 Cup.

The Mazda MX-5 Cup is a spec car, meaning all competitors have many of the same parts. The car was upgraded for 2017 with many changes to address durability: stronger engine and differential mounts, tougher transmission parts, and new engine-control software were all installed. That raised the race car’s price from $53,000 to $58,900.

Mazda Motorsports introduced the MX-5 Global Cup race car in 2014 as nature intended: as an open-top roadster. Now, those who compete in series that require a hardtop have a factory-approved option, as today Mazda Motorsports has confirmed pricing and availability for the track-only, removable MX-5 Cup hardtop.

The hardtop will be priced at $4420.00, with orders being accepted exclusively through Mazda Motorsports from owners and those who have committed to purchasing an MX-5 Global Cup race car. Deliveries will begin in April.

“While our first year was spent concentrating on the successful launch of the MX-5 Cup car in our Battery Tender Global Mazda MX-5 Cup presented by BFGoodrich Tires, we knew that was just one arena for customers. Now with an available hardtop, Mazda racers can compete in SCCA and NASA Club Racing and in the Pirelli World Challenge TCA class,” said David Cook, business development manager, Mazda Motorsports.

Information on all of Mazda Motorsports, including complete details on the Global MX-5 program can be found online at www.mazdamotorsports.com.