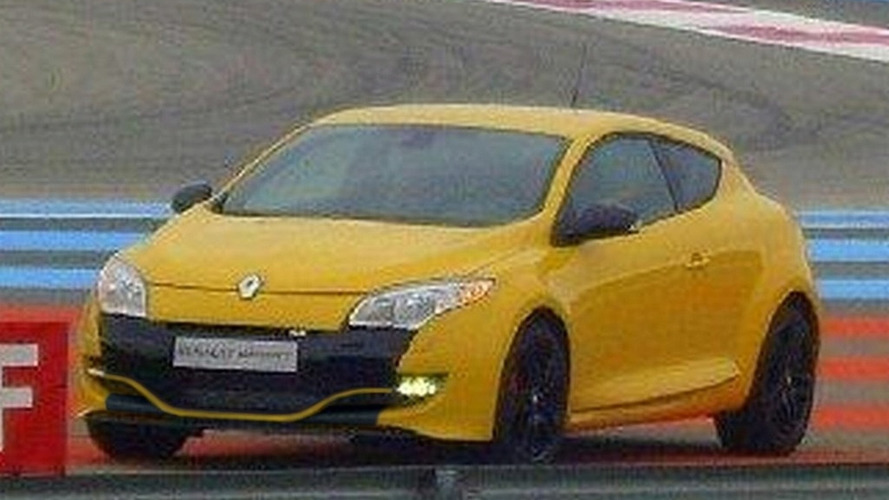 A few photos of the Renault Megane RS were spotted while the car was taking a few test laps on a French racing circuit. The car has some interesting detailing also found on other RS models.

The 2009 Renault Megane RS was spotted undergoing simultaneous test runs with a 2009 Renault Clio RS. Although unconfirmed it is widely believed the two vehicles are set to debut at the Geneva Motor Show next week.

Seen racing around the distinctive Paul Ricard circuit in France, photos posted to Forum Auto show the Megane RS with a more aggressive front end. Despite this, many fans on the website are not impressed, and will take a wait-and-see approach contingent on the official photos.

Like the Twingo RS, and the earlier seen Clio RS, the Megane RS has several black-colored details like the front bumper, air intakes, lights, and side mirrors. The rims have a gunmetal tone, and the same look as the aluminum alloy 17-inchers on the Twingo RS. It would not be a surprise to see these as 18-inch wheels on the Megane.

The Megane RS will be powered by a turbocharged 2.0-liter four cylinder pushing out around 250 hp. This is a sizable step up from the 225 hp generated by the 2.0-liter engine found on the Megane 3. The driver will control the front-wheel-drive car via a six-speed manual transmission. L'Automobile reports that the Laguna GT's all-wheel-drive system is not available on the Megane RS because of a lack of space.

However, there was room for a brake upgrade. Big Brembo disc brakes will be installed on the RS. LED daytime lights are also expected. The French magazine also says center exhaust should be seen on the car, but we are not yet convinced of that. A small rear spoiler can also be seen in one of the photos.

With these spy pics surfacing, expect to see official photos of the 2009 Renault Megane RS before its Geneva debut.