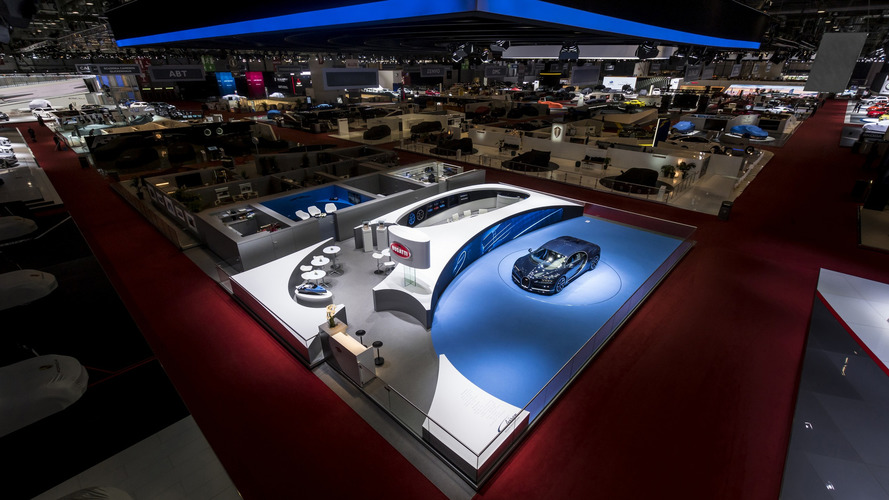 It's impressive when you think Bugatti had a small stand with just one car on display.

The curtain has fallen on the 2017 Geneva Motor Show and Bugatti is proud to announce it had an award-winning stand at the glitzy event organized in Switzerland. A jury consisting of communications and publicity specialists from the Club de publicité et de communication de Genève (CPG) concluded the low-volume hypercar manufacturer had the very best exhibition at the show and as such decided to give Bugatti the 14th creativity Award of the CPG.

The jurors were impressed by the stand’s curved roof and how the curves were installed around a light shaft illuminating the mighty 1,500-hp Chiron presented in a new exposed carbon fiber color dubbed “Bleu Royal.” In addition, Bugatti scored extra points for the attention to detail and the quality of the workmanship as well as for how it cleverly managed to make the exhibition area stand out from the crowd, despite being very small and with only one car to show off to the gathered audience.

Much like the stand, the Chiron is also a success for the company considering 250 cars of the planned 500-unit production run have already been preordered after one year since the hypercar’s debut at the 2016 Geneva Motor Show. Bugatti kicked off customer deliveries of the Veyron’s successor a couple of weeks ago and will begin test drives for potential clients towards the end of the month.

The Chiron showcased in Geneva was actually a customer-ordered car with a “Deep Blue” and “French Racing Blue” two-tone interior cabin. It was acquired by someone from the German-speaking region and the client spent one full day at Bugatti’s factory in Molsheim, France to see his hypercar come to life. More than 1,800 individual parts are being put together by 20 Bugatti employees and it takes approximately six months from the Chiron’s start of production until the joyous delivery day.

At this year’s Geneva International Motor Show, Bugatti has received an award for its stand design. In the opinion of a jury consisting of communications and publicity specialists of the Club de publicité et de communication de Genève (CPG), the French super sports car manufacturer had the best stand at the show. The jury found the efficient design in a small exhibition area, the quality of workmanship and the details of the stand especially convincing. For this achievement, Bugatti received the 14th creativity Award of the CPG. The sole star of the stand was the 1,500 PS Chiron1, with which Bugatti is continuing its success story. 250 of these vehicles, which are being produced in a limited series of 500 units, have already been ordered. Two weeks ago, the first vehicles were delivered to customers.

The jury was impressed by the intelligent way in which Bugatti’s presentation succeeded in standing out from the other exhibitors despite its comparatively small area and free positioning in the hall. Especially the curved roof was found to be convincing. The curves were arranged around a light shaft which illuminated the sole model on the stand, the Bugatti Chiron, with a bright beam. The curved structure surrounding the customer area and the quality of workmanship were other key criteria for the award.