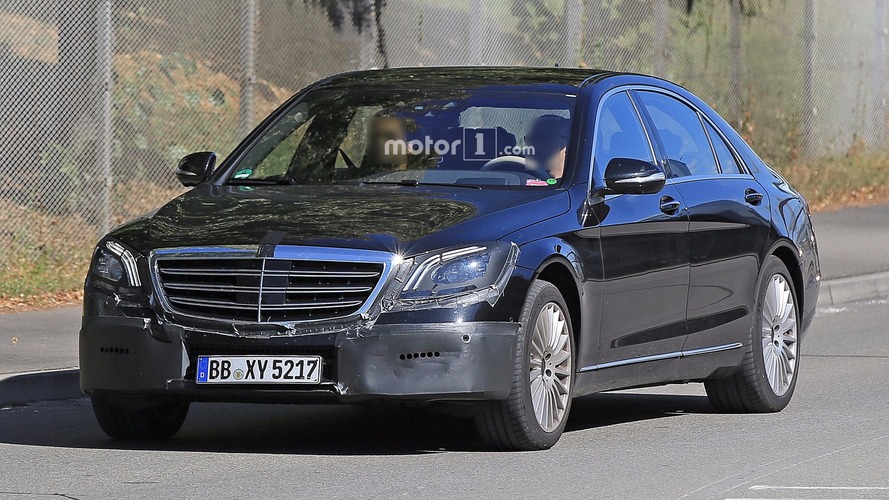 As always, it will be a technological tour de force.

The wait is almost over as Mercedes will roll out the mid-cycle refresh for its flagship model in April. Auto Express had the opportunity to ride shotgun in a prototype of the stretched Maybach version and learned from the company with the three-pointed star logo the full reveal is scheduled for “within the next month.” As one would expect from a range topper, the S-Class facelift is going to be the most technologically advanced model from Mercedes’ extensive lineup.

The safety and assistance systems that debuted in the E-Class are going to carry over onto the fullsize sedan and will actually be expanded to include new functionality. In-depth details are not available at this point, but we do know the S-Class facelift “will be able to support its driver considerably better than all the systems which have been available to date.” The reveal was made by the company’s Head of Automated Driving and Active Safety, Dr Michael Hafner, who went on to mention there are legislative hurdles regarding autonomous driving that must be solved.

A somewhat similar statement was made earlier this week by Audi chairman Rupert Stadler when talking about the S-Class’ archrival, the new A8: “as soon as legislation is passed in our core markets allowing highly automated driving on the highway, and when that is legally safe, we will offer the new key technology in the A8.”

Beyond autonomous tech, the S-Class facelift will also come with a mild exterior refresh bringing modified bumpers and some discreet changes to the headlights and taillights. Some subtle modifications inside the lavish cabin are also expected.

More important are going to be the novelties underneath the hood, with Mercedes already revealing a newly developed inline-six “M 256” gasoline engine boasting a 48 V electrical system, an electric auxiliary compressor, and an integrated starter-alternator (ISG). It’s set to offer the performances of an eight-cylinder engine while being considerably more frugal. It will pack more than 408 horsepower (300 kilowatts) and 369 pound-feet (500 Newton-meters) of torque while CO2 emissions are going to be reduced by approximately 15 percent over the previous V6.

Check out spy shots of the coupe, cabrio facelifts:

An inline-six “OM 656” turbodiesel engine will also be inaugurated with the S-Class facelift. Billed as being the “most powerful passenger-car diesel engine in the history of Mercedes-Benz,” the new unit will have two-stage exhaust turbocharging and variable valve timing. Output will stand at more than 313 hp (230 kW), which will represent a significant bump over the previous “OM 642” unit (258 hp / 190 kW) and at the same time a decrease in fuel consumption in excess of seven percent.

Besides these two inline-six engines, the 2018 S-Class will also gain a new biturbo 4.0-liter V8 gasoline motor dubbed “M 176.” It’s going to churn more than 476 hp (350 kW) and will generate its peak torque of 516 lb-ft (700 Nm) from 2,000 rpm. Aside from being more powerful than its predecessor (455 hp / 335 kW), the new engine will also consume more than 10 percent less fuel thanks to the implementation of cylinder deactivation technology. When the engine’s full power will not be necessary, four of the cylinders are going to be automatically turned off to save precious fuel.

With the full debut slated for April, expect Mercedes to release a series of teasers in the following weeks to generate more buzz around its updated crown jewel.