The bike takes major inspiration from the Honda NM4. However, there are big design differences between this version and the bike you can buy.

Scarlett Johansson is dumping the Harley-Davidson Livewire that she rides as Black Widow in the Marvel Cinematic Universe and is throwing a leg over a customized Honda NM4 for her upcoming role as Major in the live-action adaptation of Ghost in the Shell. The bike is fitting choice because its designers cite Japanese animation as an inspiration for the futuristic design.

The NM4 in Ghost in the Shell is a bit different than the one available at your local Honda dealer. The major change appears to be a switch to a more conventional riding position rather than the feet-forward seating on the production bike – maybe that element is too sci-fi even for this movie. This version also switches to swing arms both for the front and rear suspension, which gives the cycle a low-slung look that should look fantastic on film. Honda will put the cinematic interpretation of the bike on display at the Osaka and Tokyo Motorcycle Shows this year. 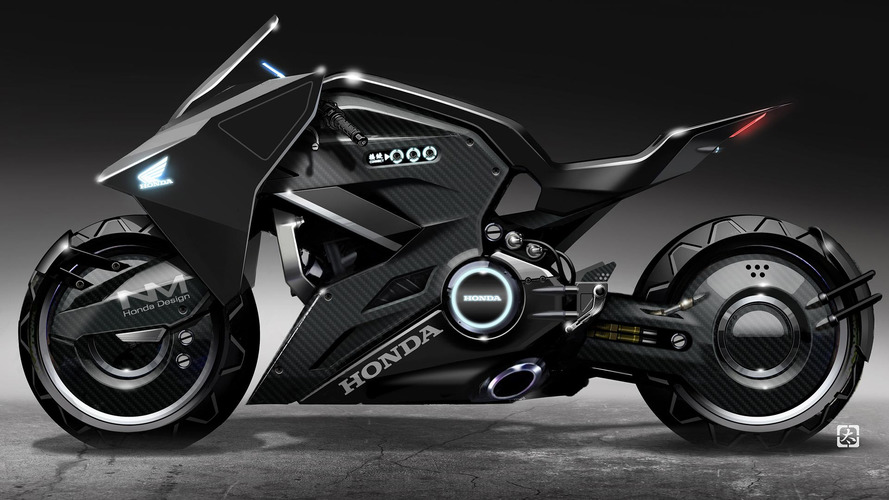 Honda launched the production NM4 in 2014 after initially showing it as a concept. The futuristic looking cruiser features an low seat height, and the rider has his or her legs facing forward onto the pegs. Power comes from a 670 cubic centimeter parallel twin engine, and it hooks to a six-speed dual clutch automatic gearbox.

Ghost in the Shell was originally an ongoing illustrated work by Masamune Shirow, but an animated adaptation in 1995 gave the series an even wider exposure. Set in the near future, the world is now full of people with cybernetic enhancements. The Major is part of the crime-fighting group Section 9, and the story takes on heady sci-fi themes like artificial intelligence. Ultra-violent action and stunning visuals accompany the more thought-provoking moments, too.

For the live-action adaptation, the creators appear to take a little inspiration from Robocop because Major (now a name rather than a rank, apparently) suffers a serious crash and becomes the first cyber-enhanced super soldier. However, the trailer indicates that she’s not really the only one.

Ghost in the Shell premieres in the United States on March 31. You can check out the movie’s trailer below. An ultra-brief shot of Johansson on the bike appears 1:27 into the video.

Honda futuristic motorcycle based on the NM4 makes appearances in the feature film “GHOST IN THE SHELL”. In theaters from March 31st in the U.S. and more than 50 international markets.
JAPANESE
PDF
印刷
Honda has supported the production of the feature film “GHOST IN THE SHELL”, produced by DreamWorks Pictures and Paramount Pictures, and provided its highly acclaimed large motorcycle model “NM4”, whose futuristic style has been very popular, as the base model for the hero bike in the film.

Based on the internationally acclaimed Japanese manga, “Ghost in the Shell” is set in the near future and stars Scarlett Johansson as Major, the first of her kind, a human saved from a terrible crash, who is cyber-enhanced to be a perfect soldier devoted to stopping the world’s most dangerous criminals. Beat Takeshi plays her boss, Aramaki. The film is produced by Avi Arad, Ari Arad, Steven Paul, and Michael Costigan. Tetsu Fujimura, Mitsuhisa Ishikawa, Jeffrey Silver and Yoshinobu Noma are the executive producers. The film is directed by Rupert Sanders.

The NM4 was developed under the keywords of “the Neo-futuristic” and “COOL,” and was launched in April 2014. The ideal fit between the concept and styling of the NM4 and the worldview of the film led to the provision of the vehicle for filming. The vehicle in the film was based on design sketches provided by Honda, finessed by the film production team, and subsequently placed in the film as the hero bike ridden by the lead character. The vehicle helps to make the futuristic world depicted in the film more realistic.

The film “GHOST IN THE SHELL” will be released in U.S. and in more than 50 countries and territories around the world on March 31st. The film will open in Japan on April 7th. Please visit the official website of http://www.ghostintheshellmovie.com for release dates and further details about the film.