A brand new Ford Focus RS will set you back just over $36,000. But why settle for something so common new when you can pick up this soon-to-be-classic 2009 Ford Focus RS? It’s heading to auction next month at the Classic Car Auctions Birmingham sale.

Essentially "brand new," this Focus has just 45 original miles (72 kilometers) on the odometer. It's spent the last seven years in storage, and has been owned by one family since new – a husband and wife duo. In that time, the car has had one service, which was carried out in October 2016. 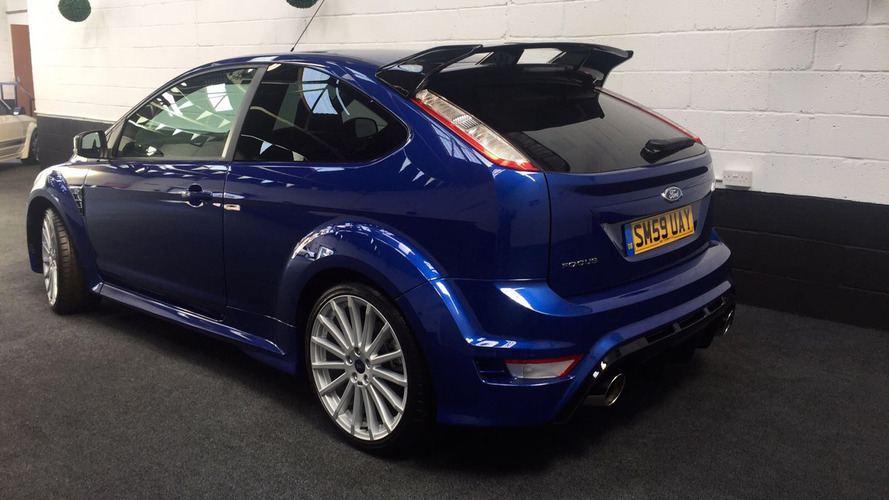 Under the hood, the same turbocharged five-cylinder engine remains producing 300 horsepower (223 kilowatts) and 324 pound-feet (439 Newton-meters) of torque. All that power is managed via a six-speed manual transmission and sent to the front wheels exclusively. From a standstill, this Focus RS will sprint to 62 miles per hour (100 kilometers per hour) in just 5.9 seconds.

Don't worry, this won’t be the only fast Ford that crosses the auction block in April. Alongside the Focus RS will be a low-mileage 1992 Sierra Sapphire 4x4 Cosworth, and a concours condition 1983 Escort 1600i. The auction will take place in Birmingham, U.K., beginning April 1, 2017.

A 2009 Ford Focus RS, with just 45 miles on the clock, is ready to be sold at Classic Car Auctions’ (CCA) two-day auction at the Practical Classics Classic Car and Restoration Show, taking place at the NEC, Birmingham on the 1st and 2nd April.

The delivery mileage car is essentially brand new having been kept in storage for the last seven years. One family owned from new, the car has had just two registered keepers, a pair of husband and wife Ford fanatics.

“The MK2 Focus RS has all the makings of a future classic and indeed are proving popular at auction. Back in February our sister company Silverstone Auctions offered an Ultimate Green example with just 1,800 miles which sold for an amazing £41,063 including buyer’s premium,” comments Guy Lees-Milne, general manager and classic car specialist at CCA.

“With the launch of a new Focus RS to much fanfare and continued demand for all things Fast Ford we expect a similar amount of interest with this amazingly low mileage example,” added Guy.

At CCA’s biggest ever sale, there’s a huge selection of other Fast Fords on offer with everything from a Fiesta XR2 to Escort RS Turbos and Capris.

Highlights include a low mileage 1992 Ford Sierra Sapphire 4x4 Cosworth, estimated at between £20,000 and £25,000. The ex-Ford demonstrator example was restored by RS Classic Cars and Service last year, after being professionally stored from 2005 to 2016.

A 1983 Ford Escort 1600i in concours condition is estimated at between £18,000 and £22,000. Also restored by RS Classic Cars and Service in 2016, the car is totally standard and even includes the original radio. It comes with the original handbook and service book with nine stamps, plus full restoration invoices.

“Our biggest ever CCA auction is a perfect opportunity for Ford fans to purchase their dream classic and so I’d encourage potential buyers to come and visit us at the NEC”, concluded Guy.