Subaru shows us how to drive a car sideways 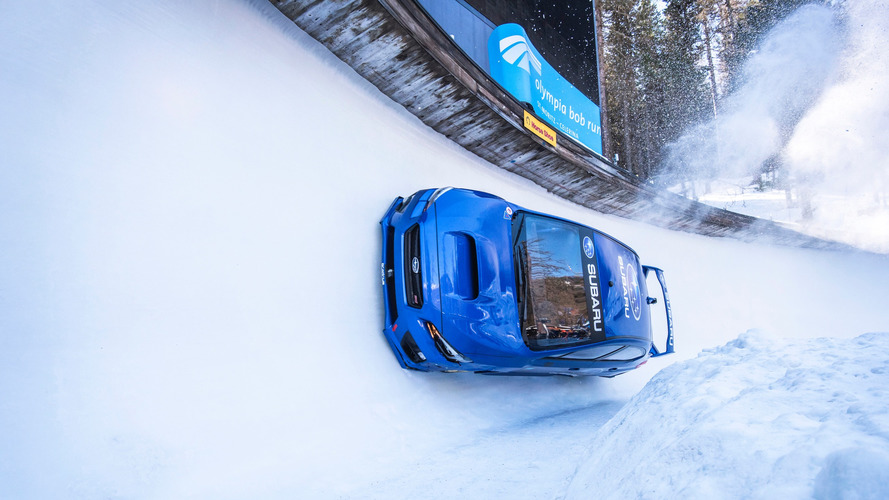 A few days after Geneva, Subaru invited us, Mark Higgins, and the Prodrive racing team to share in a slice of the impossible. You’ll never think of bobsledding the same way again.

Mark Higgins is pretty unassuming for someone capable of doing inhuman things with automobiles. Sitting across the table from him at a dinner in St. Moritz, Switzerland, I have to lean in to hear him explain some of the preparation for yet another mind-bending, Subaru-based piece of stunt work. He’s soft spoken, quick to joke and laugh, and vaguely babyfaced; far more open and conversational a personality than the stereotypical racing driver.

New BMW Corners Like It's On Rails: Because It's A Bobsled

Higgins is a three-time British Rally Champion, a stunt driver for Bond films, and the record holder for the bonkers Snaefell Mountain Course that underpins the Isle of Man TT. (That record was set in a Prodrive-prepped Subaru WRX STI, by the way, and not a motorcycle… anyone who has seen the width of Manx roads will understand the insanity that lies therein.) Nowhere on his resume can I find “clothier” or “master tailor” – surprising to me since his jeans must be fantastically altered to confine and obfuscate the world’s biggest set of balls.

I’m a pretty cool guy, but I’ll admit I don’t make a habit of having languorous dinners in paradisiacal Swiss towns with rally drivers. But I do spend a fair amount of time hanging out with Subaru, a group that regularly enjoys pushing the envelope of its vehicles in unusual and adventurous environs.

This time around the invitation was impossible to pass up. Step One: Grab keys to a WRX STI and race drive with a handful of journalists from Geneva to St. Moritz, via a few of northern Italy’s choicest mountain roads. Step Two: Chill out with some European one-percenters, their watches, and their good wine. Step Three: Hang around while Higgins and the Prodrive guys shred gravity and good sense by flinging an STI down a bobsled course at the sport’s most famous turn, called Horse Shoe.

Subaru’s halo performance car is a bad mother, even in stock form. After watching the first day of Higgins’ practice (and filming for what promises to be a spectacular piece of video), I spent a few hours driving Switzerland’s ninth highest road pass, called Julier. It’s the kind of road that lifelong flatlanders like me obsess about driving: Massive elevation changes over snaking switchbacks, with added intensity by way of soft shoulders stacked with neatly plowed snow. Having a grippy car here was good, but having one with a really mean-sounding boxer engine, and enough turbo torque to charge big hills at over 7,000 feet, was better.

Naturally, the car that Higgins would drive the following day, though still an STI, wasn’t suitable for anything like alpine touring. The stunt that Subaru had concocted was extreme, and the modifications Prodrive enacted equally so. The gig sounded simple: drive the car down half of the rather famous Olympic bobsled run at St. Moritz. Before this program I’d never really seen a “bob run” up close, so I didn’t really understand the inherent danger.

Even though the track hand-dug for Higgins would be wider than that used for the sledders, it was still only about two-meters across.

Bobsleds (or bobsleighs if you’re not an American) are narrower than cars… a lot narrower. They’re also low and built specifically to pull crazy Gs on high curbs and vertical walls. Even though the track hand-dug for Higgins would be wider than that used for the sledders, it was still only about two-meters across.

At that width the STI didn’t have room for wing mirrors, to say nothing of any large mistakes by the driver. To account for inevitable wall-bumping, Prodrive bonded bumpers to the front and rear corners of the car, in addition to strengthening the bodywork from the inside. Higgins would be snug inside a full racing cage, naturally, with high neck and head support, along with side netting that would keep him safe in the event the car ended up on its side, upside down, or both.

The team stopped short of replacing tires with skis, but the rolling stock was more metal than rubber. Titanium-tipped studs would grab the ice, mounted to dramatically skinny 135-section tires (and fitted to gold wheels, naturally). Even the impressively spiked tires seemed like a thin argument for Horse Shoe, though, the first time I saw it up close.

Higgins would be a virtual Spider Man for a few seconds if he pulled off the maneuver from one end to the other, and traversing the bowl wasn’t even the hardest part.

Don’t think of the Olympic run’s most famous turn as a corner so much as a curved wall. Even in the stirring photos you see here, it’s hard to grasp the verticality of it – the slabby sides are actually 90 degrees – until you’re standing next to it. Higgins would be a virtual Spider Man for a few seconds if he pulled off the maneuver from one end to the other, and traversing the bowl wasn’t even the hardest part. That award would go to the transition from the 90-degree wall, back to the flat track, over a span of just a few meters. Hit the transition point too high, and you might either roll over the top of the track and then (presumably) as far down the back side of the hill as the trees would allow, or roll over onto the car’s roof. Both scenarios seemed slightly more plausible than the desired path back onto four tires, and continuing in one piece to the stopping zone dug about halfway down the regular run of the track.

The night before the run, based on the conversation over pizza and Barolo, betting on the outcome of Horse Shoe was running about five to one in favor of calamity. I made a bad joke to Higgins about his “last meal” – he laughed it off with good humor and the casualness of a driver who’s better than pretty much everyone else, and just about anything you’ll ask him to do.

The eventual video (we have the teaser to share today), will undoubtedly give you a sense of the drama that went into the live event, but if you’re like me it’ll probably seem – by way of your computer screen – that success was a foregone conclusion. The morning of the Horse Shoe run, I can assure you, that was not the feeling on the ground. We’d already seen Higgins hit the wall hard coming out of the previous corner complex – “Sunny” – and break through, dramatically. The STI stayed on the track, but only just, and it meant that there would be less running room to get up to speed for the main event.

I held my breath when the producer called action for the final run. And, even after, watching the slightly pixelated footage from my Facebook feed, I couldn’t really believe what I saw. A 3,000-pound car hanging from a wall of snow; an age of silence before the snow-muffled “bang!” of the car careening from corner to corner, and driving smoothly to the finish line; the slow motion contrail of World Rally Blue debris flying off and away into the blanched landscape. I exhaled with a cheer, joining the chorus around me, and was honest-to-god exhilarated.

The Subaru team loves an adventure. Truthfully, they could have given us the drive through the Alps and some kind of bobsledding experience, and called it good ROI for a followup bit of Geneva Motor Show fun. But Mark Higgins is their man – up for anything, it seems – and a megaphone for the wild spirit of the increasingly successful company. Just enough, I can attest, to transform a PR stunt into a singular, surreal, and spectacular moment.